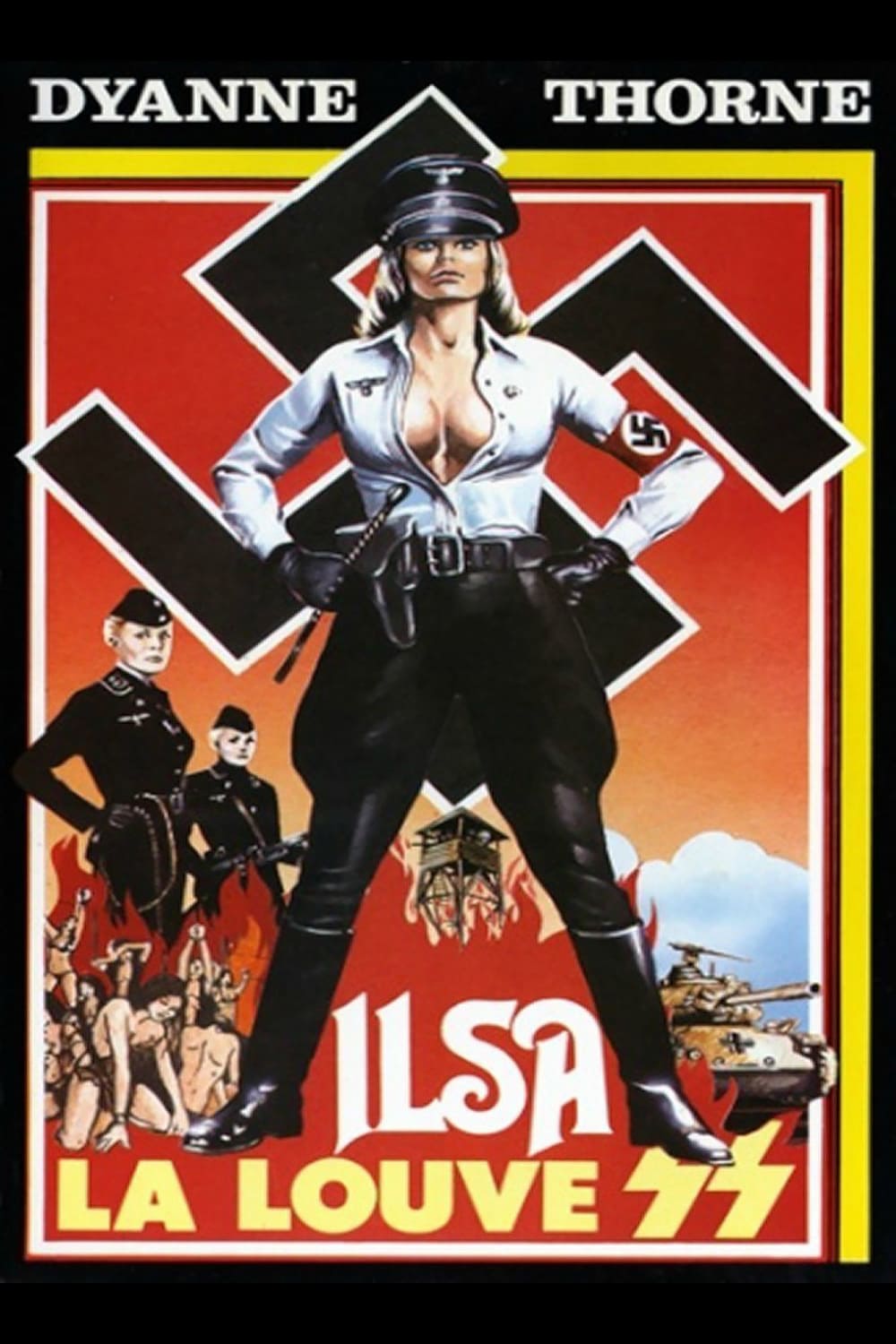 Ilsa:She Wolf of the SS

What are these sick bastards doing? Obviously inspired by Dr Josef Mengele’s ‘pioneering’ work in Auschwitz, this is a flick that concentrates on the more extreme Nazi obsessions. Ilsa (Thorne) is a ‘fraulein doctor’ in charge of a small medical experimentation camp that at first glance looks like a converted garden center. She’s aided by one other doctor, a handful of nurses, two magnificent blonde SS subordinates and five or six male guards. “There is no need for you to be afraid,” she reassures a bunch of new female arrivals, all of whom are suspiciously pretty and busty. “This is no Dachau, no Ravensbruck. We are doctors. We are here to help you. Your stay with us will be short, but in it you will be helped to serve the Third Reich. That is your destiny.”

Is the villain any good? Ilsa is introduced fully nude in her bedroom riding a supine man in much the same way as Catherine Tramell all those years later. Both are nymphos who like to be on top, but although Tramell’s a psychotic super-bitch who’s a dab hand with an ice pick she’s a rank amateur next to Ilsa when it comes to inflicting agony and death.

Two things drive Ilsa’s wholehearted destruction of life: the failure of men to satisfy her in bed and a fanatical devotion to the Fatherland. Straightaway we grasp the first motive when her latest lover suffers a bout of premature ejaculation. “You should have waited,” she grumbles in a masterly bit of understatement. Not long afterwards he’s dragged off by her magnificent blonde subordinates to be castrated. Well, that’ll teach him for being a dud lay and a member of an inferior race.

Ilsa is no paper-shuffling bureaucrat a la Himmler. She likes to be right in the thick of the action and never shies away from the chance to mutilate. However, although she enjoys unquestioned authority within the converted garden center, sorry, concentration camp, she’s not always taken seriously by her Berlin superiors. Those stupid men. For a start, they’re unimpressed with her meticulous private research into pain endurance. She’s hell-bent on giving them ‘documented proof’ that a carefully trained woman can withstand pain better than any man. Frankly, I’m a little puzzled how this is going to help the war effort, especially as I thought childbirth was already ample proof. Christ, if guys had to go through shit like that, the human race would stagger to a halt within a couple of generations.

Anyway, it’s an extraordinary performance by Thorne. She really does have a ball (or should that be balls?) as the sex-crazed commandant. With her expressive eyes, flaxen mane, long painted fingernails and awesome chest, she also looks bloody great in her jet-black uniform. She’s a decent actress, has a fair stab at the Teutonic accent and can do a great Heil Hitler salute. Most of all, she’s camp as hell. There’s usually a twinkle in her eye, especially when she’s doing the more outrageous stuff like tonguing the end of her horse whip while watching an orgy. Strangely (and despite the huge array of bush on show) she keeps hers hidden. It’s the only time she’s bashful in the whole shebang.

How skuzzy are the men? I guess it’s a bit unusual in an exploitation flick for the men to be a lot more likable than the gals. Of course, the guards indulge in drunken gang rape, but apart from such small indiscretions they don’t do much more than strut around and get shot when necessary. There is a male doctor called Binz (exploitation regular Buck Flower) but he’s a timid non-entity with stooped shoulders. He usually only speaks when spoken to and wears a faintly quizzical expression, as if he’s not quite convinced of the need to shave a prisoner’s pubes off until the blood runs. Most of the time he’s moseying around in the background, perhaps confused why he’s the only bloke not getting any pussy. He doesn’t appear manly enough for Ilsa to fuck, nor intelligent enough to grasp that her disinterest happens to be an enormous blessing in disguise.

Well, the road to true love is never smooth, but luckily Wolfe has a fantastic secret: He’s a sex god. Or as he tells a ‘half-man’ prisoner, who’s already been on the sharp end of Ilsa’s no-nonsense response to carnal disappointment: “I can hold back for as long as I want. I guess you could call me a freak of nature, a sort of human machine that can set its controls to fast, slow or never.”

Once he gets between Isla’s shapely legs (in a scene that should have been accompanied by the Theme from Shaft) we find out he’s no bullshitter. He really can perform under the most extreme pressure, quickly transforming Ilsa into little more than a giant quivering vagina. Indeed, he’s so good she even starts fantasizing about having his children. “They will be beautiful,” she muses in post-coital reverie. “Strong!”

Bloody hell, the cougar’s morphed into a kitty-cat.

I have no idea what it means that she’s become more feminine, more recognizably human after finally getting some proper cock. Is this the best way to stop the future equivalent of real-life monsters like Ilse Koch and Irma Grese? To fuck them properly?

The only other significant man in this cult classic is a terrific appearance by a seemingly refined and composed SS general. He turns up to appraise Ilsa’s gangrene-inducing work. “I see the reports of your charm and beauty were not exaggerated,” he says after stepping out of his staff car and kissing her hand. For a short while his superior rank results in Ilsa being submissive. However, it only takes a few hours in her company before he’s revealed to be a self-loathing little boy who crumbles before her highly polished jackboots in a brilliantly funny denouement.

How do the lovely ladies fare? Terribly. There wouldn’t be anything wrong with subtitling this one Lovely Lady Armageddon. As already mentioned, Ilsa is helped by two immaculately dressed, blonde subordinates. Now these gals really are something, dishing out the sensual sadism with every chance they get. However, such enthusiasm does result in their military discipline occasionally slipping, best illustrated in the scene in which they’ve removed their tops to flog a pair of misbehaving prisoners to death. (Maybe I should give them the benefit of the doubt in that they didn’t want their beautifully pressed uniforms splashed with blood). We never learn their names but I enjoyed their vigorous, sexually insane tomfoolery almost as much as The Countess, The Empress and The Princess in that bonkers bit of blaxploitation Three the Hard Way.

As for the prisoners, I have to say they have less fun. One teenage ginger chick doesn’t want to remove her clothes for an initial examination in public, citing the fact she’s ashamed.

Ilsa understands. “We have to see you in order to know what work to assign you,” she explains, convincing precisely no one in the room.

But the prospect of acute embarrassment is the least of these girls’ worries. The lucky ones are sterilized and sent to field brothels, but any that catch Ilsa’s eye might be infected with syphilis, typhoid or just hung upside down naked.

Saying all that, the strange thing about this flick is that (despite the relentless degradation of women) it prompts unsettling questions for a bloke. Ilsa’s the boss here, one of the most fearsome alpha females ever put on screen. At one point she’s aptly compared to a black widow spider, a frightening creature that might launch into a murderous attack moments after mating. Well, aren’t we all a bit scared of not being able to satisfy the lady in our life? Isn’t Ilsa tapping into our deepest fears? Couldn’t it be argued that Ilsa embodies male anxiety? Do unsatisfied women fantasize about cutting off our useless nuts and moving onto a guy with a bit more stamina?

Bear in mind The Stepford Wives was released the same year as Ilsa. In that half-decent, ultimately eerie movie, men attempted to stem the scary tide of female liberation (with its attendant demands for better jobs, control over their bodies and God forbid! some consideration in the bedroom) by killing their women and replacing them with obedient robots. Ilsa stands at the other end of such extreme behavior, its titular character personifying female authoritarianism while subjugating and killing any man deemed a flop.

I sincerely hope Ilsa is not some whacked out snapshot of the future.

Would the violence make a vicar faint? Yeah, I think you’d need to whip out the smelling salts pretty quickly for this one. There’s a lot of the red stuff splashed around, ranging from toenails being pulled out to less than relaxing dips in superheated baths. There’s even some poor naked wench chucked into a decompression unit and left there until the hemorrhaging blood gushes out of her mouth and down between her voluptuous breasts and… Excuse me, I think I want to be alone now.

How fucked-up is this film? It starts with a written intro from the producer, Herman Traegar, in which he has the temerity to attempt a justification for its catalog of lurid excesses, citing some guff about ‘documented fact’ and the like.

Come on, Herman, fess up, you’re just exploiting the darkest episode in mankind’s history to help fellow sickos like me get their rocks off.

‘We dedicate this film with the hope that these heinous crimes will never occur again,’ he concludes as an off-screen Hitler rants Sieg Heil. Notice how Herman doesn’t say who the film’s dedicated to coz I doubt any surviving victims would have appreciated its portrayal of their ghastly experiences within the camps.

So, how do we justify the existence of such an abhorrent flick?

An awful lot of movies exploit human misery; it’s just they do it in a classier way. Yes, Schindler’s List is a superior piece of art to Ilsa, but viewers are still getting some sort of vicarious jolt from its deadly goings on. Money is nevertheless being made. Reputations are being enhanced. At the end of the day Spielberg’s Oscar-winning magnum opus is entertainment just like Edmonds’ Ilsa.

All built on the murder of twelve million people.

Ilsa is simply more upfront and obvious about its wallow in degradation. People wanna condemn such sordid stuff yet it was successful enough to lead to three rapid-fire sequels. Whether we like it or not, there’s an unhealthy fascination with the Nazis, especially what went on in the death camps, and I suggest you think about that the next time you pop on Slayer’s Angel of Death.

Besides that, trash like Ilsa is nowhere near good enough to convince me even for a second that it’s nothing more than people with an adolescent desire to shock playing dress up in front of cheap, sparsely adorned sets while pretending to hurt one another.

Where’s the harm in that?