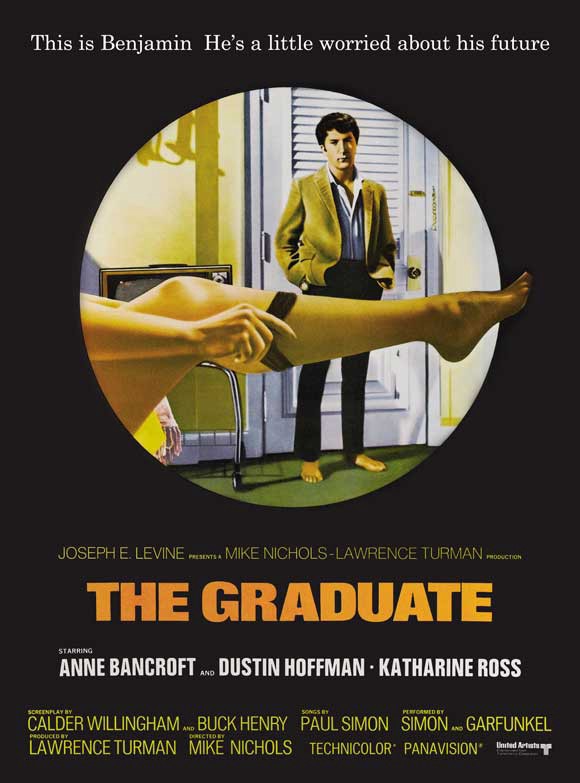 There’s a scene in The Graduate where Benjamin Braddock (Hoffman) is lying supine on a hotel bed while Mrs. Robinson (Bancroft), the sophisticated older woman who’s introduced him to the mysteries of sex, sits alongside clad in a black bra slowly unbuttoning his white shirt and running her hands over his smooth chest. Accompanied by The Sound of Silence, Benjamin’s got this amazing expression. He’s gazing dumbstruck up at her and everything’s shiny and new, the world’s been reinvented and he’s as alive as he’ll ever be. It’s so simple and beautiful and yet terribly sad because it must crumble.

After all, such wondrous moments can never endure. Life doesn’t work like that.

Great actors can do this, they can make you fall into their world without saying a word, and Hoffman achieves it here in much the same way Anthony Hopkins does when he’s cornered in his private room and transfixed by the feminine playfulness of Emma Thompson in The Remains of the Day.

Still, there’s an awful lot more to Hoffman’s performance than the occasional glimpse of mute reverie. Indeed, he spends most of this coming of age classic in an acute state of bewildered discomfort. Having recently graduated from an East Coast college, he’s at a loss as to why such a high point isn’t providing the easy, logical stepping stone to the next part of life. As a student he was an award-winning track star but now…

There are just so many questions, the existential ones he’s asking himself and the suffocating ones continually being lobbed at him by parents and their ilk about what he’s going to do. The turmoil is written over his face from the second we first encounter him sitting on a plane, prompting his concerned father to immediately ask upon his return to their swish Californian home: “What’s the matter?”

From here Benjamin starts feeling like a fish in an aquarium. He’s choking under the relentless curiosity, smothering expectations and constant suggestions, not to mention his bristling dislike at the assumption of dutiful conformity. His 21st birthday present of scuba equipment proves especially apt, enabling amused onlookers to peer down at him after he’s forced to jump into the backyard swimming pool and breathe underwater.

All Benjamin knows is what he doesn’t want, having no doubt that an offer of a soul-crimping career in plastics would do little more than turn him into a plastic man. The best he can do is yearn for a ‘different’ future.

“I’ve had this feeling ever since I’ve graduated, this kind of compulsion to be rude all the time,” he says. “It’s like I’m playing some kind of game, but the rules don’t make any sense to me, and they’re being made up by all the wrong people.”

Then Mrs. Robinson makes her fateful move, complicating matters even further. The virginal Benjamin gives us a vivid portrait of simultaneous dread and desire, his mouth full of objections yet his panicky eyes telling a different story. He’s a boy stumbling into an adult’s world, the terror so plain on his face that sometimes it’s like he’s attending his own execution. When he isn’t bumping into things, he’s failing miserably at playing it cool, inanely repeating stuff in a thick voice that’s always threatening to break, and even driving on the sidewalk. He goes into such a deep tizzy at the thought of Mrs. Robinson fishing around in his underpants that he can’t help sweating in her cool, classy and deeply unsettling company. Even when they finally end up in a hotel room he’s still a cack-handed klutz desperate to wangle his way out of it.

“Maybe we can do something else together,” he suggests, trying to throw everything into reverse. “Mrs. Robinson, would you like to go to a movie?”

Christ, how good is Hoffman in this flick? Has anyone ever given such a convincing performance of sustained, consistently amusing discomfort? The Graduate is a riveting triumph, immeasurably bolstered by one of the great starring debuts, and remains as fresh today as it was at the tail end of the sixties.

Anyhow, back to Benjamin and his excessive nervousness in a hotel room. He wants out but his elegant seductress knows how to push his buttons and it’s not long before the deed is done. The intense confusion dissipates and she becomes his world.

At least for a little while.

Benjamin’s newfound joy of fucking means he no longer gives a fuck about all those other big questions. Plastics…? Graduate School…? Who wants to think about such mundane shite when he’s got access to a hot cougar, good weather, a swimming pool, a chunk of change in his pocket, a red Alfa Romeo, and the many privileges of youth. His eyes are open and that troublesome smoke’s cleared. Now he’s spending his days lying on an inflatable pool lounger, drifting literally and figuratively, before spending his nights in carnal bliss. It’s a situation his nearest and dearest can hardly fail to notice. “Would you mind telling me what those four years of college were for?” his father asks. “What was the point of all that hard work?”

Benjamin shrugs. “You got me.”

But this state of contented indifference can never last. After the giddying high comes the sour crash, prompted by his desire to have an actual conversation with his clothes-shedding temptress. Perhaps he’s also chafing against being in the traditionally female role. After all, he was the one who was pursued and conquered. In his subsequent attempt at a discussion he discovers Mrs. Robinson’s extreme sensitivity about her daughter Elaine (Ross), a sensitivity doubtless rooted in sexual jealousy and the fear of aging, as well as the belittling verdict that he’s not good enough to date her. Beforehand Benjamin was always sweet and polite, but this putdown is a real slap in the face.

“I’m not proud of myself spending time with a broken-down alcoholic,” he cruelly tells her while hunting around both for his clothes in their hotel room and some leverage. “And if you think I come here for any reason besides pure boredom then you’re all wrong. This is the sickest, most perverted thing that ever happened to me.”

But after a horrible circular argument all he can do is take his trousers off again, get back into bed and say: “Let’s not talk at all.”

Everything’s falling apart, Mrs. Robinson isn’t the answer anymore than plastics, and he’s right back at square one. Before long he’s mumbling: “My whole life is such a waste. It’s just… nothing.”

All that’s left is to break the ‘rules’ by taking Mrs. Robinson’s gorgeous daughter out. However, Benjamin’s so confused by his lack of direction and all this head-spinning female contact that he has to pretend to be another person during the disastrous date. He drives like a fuckwit, gives one-word answers, walks too fast, wears dark sunnies that mask his eyes, smokes, and takes her to a strip joint. Is there a funnier, sadder moment in sixties cinema than a busty stripper spinning her tassels in opposing directions while he asks the lovely, refined Elaine: “How’d you like that? Could you do it?”

Christ, where has Benjamin gone? Who is this dislikable schmuck?

There’s only one question left: Is it gonna work?