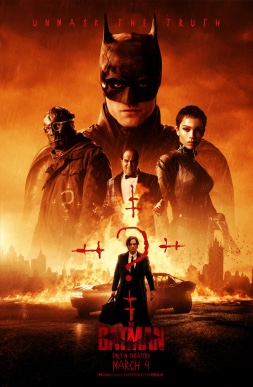 The Batman only works in Black, or really dark grey

“The Batman” – I only work in black. Or really, really dark grey.

Batman has had quite the adventure throughout his Hollywood career. Starting way back in 1966 with two dudes wearing their underwear on the outside of their pants, there have been ten live-action films. After that ridiculous (even at the time) depiction, 1989’s Batman embraced the idea that Batman is dark. As we’ve seen far too many times, young Bruce Wayne watched his parents get murdered in front of him, so of course he should be depicted as dark. Which means the movie should also be dark. Unfortunately, Joel Schumacher didn’t get the memo, which led to the franchise turning into an absolute joke with Batman Forever and Batman & Robin, featuring more neon than all of Las Vegas. Schumacher also reminded us why Robin sucks.

Christopher Nolan understood the assignment, giving us two great movies and one mediocre movie, all of which took the darkness to a new level. While Zack Snyder kept most of the darkness for the DCEU, we’ll just pretend the DCEU doesn’t exist. Yes, that includes the Snyder cut of Justice League, which I refuse to watch because Snyder’s movies reminded us that Snyder sucks. Incidentally, Snyder sucking is how we got to today’s The Batman, a movie that is another reboot of the caped crusader. And if you thought The Dark Night was dark, wait ’til you get a load of The Batman.

(SPOILERS – They’ll be so minimal you’ll barely be able to see them.)

The film starts off with nine-year old Bruce Wayne watching his parents get murdered in an alley. Just kidding. Like with the new Spider-Man films, we don’t have to watch Bruce’s parents die for the umpteenth time. Instead we are simply told that it happens. We also don’t have to watch adult Bruce (Robert Pattinson) become Batman, learn the origin of trivial things like the bat-signal, or watch how any of the villains become villains. They all just are. Thank you, Matt Reeves (director/writer/producer).

The film actually starts with the murder of the Gotham City mayor and Batman narrating about criminals being afraid of the shadows whenever the bat symbol is shining in the night sky. The most important part during the narration isn’t what we are seeing or what Batman is telling us, it’s the slow, ominous music telling us the kind of movie and Batman we’re about to experience. When Batman finishes beating up a gang of hoodlums on a subway platform (preventing them from assaulting a train passenger), the music hammers home its final note while Batman growls that he is Vengeance. This guy definitely knows how to properly wear his skivvies.

Perhaps the best decision by Reeves was to lean the story more into Batman as the world’s greatest detective. With the investigation of the murder of the mayor underway, Detective James Gordon (Jeffrey Wright) has enlisted Batman to help. Gone is the idea that Batman is helping Gordon clandestinely, as Gordon walks Batman through a phalanx of cops at the crime scene. At this point, we know Batman has existed for two years, operating as a vigilante, but surprised to see how openly. It’s a very cool scene, setting a tone of uneasiness between the cops and the duo of himself and Gordon, leaving us to wonder when and how that situation will go sideways.

It is quickly revealed that a serial killer calling himself the Riddler (Paul Dano) is responsible for the murder. Left at the scene are clues and riddles specifically for Batman to solve. This continues throughout the film as the Riddler kills more prominent Gothamites, always leaving something for Batman to continue the chase. As the investigation moves along, we are asking the same questions as Batman and Gordon. What do the victims have in common or how are they related? What is the Riddler’s true end game? Batman’s investigation leads us to the introduction of the other major characters in the film. Carmine Falcone (John Turturro), the biggest crime lord in Gotham, Penguin (Colin Farrell), a lieutenant to Falcone, and Catwoman (Zoe Kravitz), a waitress in a nightclub run by Penguin. We know all of these people are somehow connected to the Riddler’s killings and the first third of the film expertly puts us on the edge of our seats in anticipation. Of course, then the film straps one of Jigsaw’s death traps to one of the victim’s faces and we recoil into the back of our seats.

Hey, did I mention this film was dark? I won’t spoil the details of the different killings, but at one point in the movie, my exact thought was “wow this reminds me of Se7en.” My next thought was that I was glad I didn’t bring my nine-year old son to this film, silently thanking the film for being three hours and screening on a school night. But, yeah, it’s dark. Really. Really. Dark.

As I said, Batman needs to be dark. It’s no mistake that the most well-received films in the franchise are the dark ones and the most hated films in the franchise are the comic-book-y ones or the Snyder ones that are only visually dark.* But it can’t just be dark for lighting purposes (looking at you Zack). The darkness has to have a purpose and The Batman puts that purpose in a death grip that is equal parts story and character building. In fact, The Batman goes so dark that nobody, not even Alfred (Andy Serkis), can be presumed a safe bet to emerge from the film unscathed.

(* Side note: the 1966 film has a 79% approval on Rotten Tomatoes based on 33 reviews, only one of which was actually written in 1966. That approval rating is almost certainly borne out of nostalgia for a show that lasted just two years rather than for actual quality.)

The immediate question I have now is what is going to happen to the DC Extended Universe (DCEU) films? Warner Brothers and DC never had much of a plan for the DCEU to begin with, but rebooting Batman (and the Joker, for that matter) as dark and gritty, borderline horror seems like an obvious sign that they have zero plan or faith for a coherent DCEU. There is also the problem with the latest DCEU films being decidedly comic-book-y. It’s kind of hard to see the current Harley Quinn and Shazaam existing in this retooled Batman world. Well, maybe Harley.

As for The Batman itself, it’s easily the frontrunner for best film of the year. I admit I was very skeptical about Pattinson as Batman, but he had me believing in him before the halfway mark. Add in equally good performances from the rest of the cast, the slow burn as the investigation was allowed to run its course (rather than be squished into a two-hour timeframe), the great music and visuals, and the perfect amount of action as to not overwhelm the other elements of the film but still be plentiful. If not for a stray storyline about Bruce maybe – but it’s never clear and dropped by the end of the film – being bankrupt, the film was as close to flawless as any I have seen. Which is saying something for a film this dark.

Rating: Worth double what you paid for it and triple if you skipped the Snyder Cut.