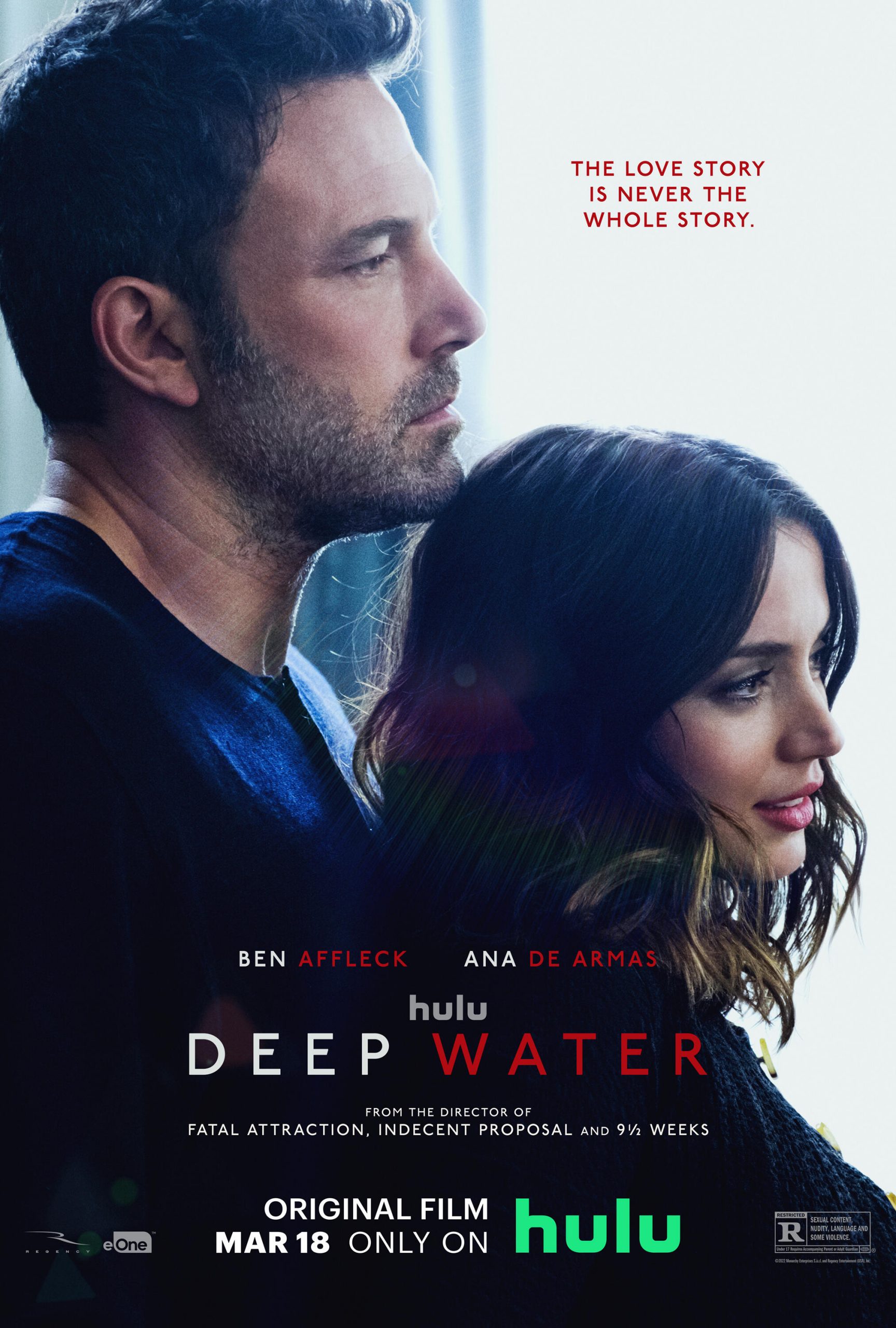 That’s definitely not a candy bar floating in the pool

“Deep Water” – That’s definitely not a candy bar floating in the pool.

One of the first things they teach students in screenwriting class is to write a sympathetic protagonist so the audience has someone to root for. Apparently, the writers of Deep Water – Zach Helm and Sam Levinson – missed that week of class because every character in Deep Water is a character you’d like to see drown in a toilet. This includes Trixie, the adolescent daughter of loathsome couple Vic and Melinda Van Allen (Ben Affleck and Ana de Armas, respectively). To be fair, Helm and Levinson adapted a novel of the same name written way back in 1957, but even if the characters are shits in the book, at least one of them could have been modified for the movie to make them, you know, not shits. Ooh, maybe that’s the twist – we’re supposed to root for the deep water.

(SPOILERS – Not even Disney cares if this movie gets spoiled. They removed it from opening in theaters and sent it straight to Hulu.)

Vic and Melinda have a marriage best described as “huh?” We first meet Vic setting his bicycle against the front door of his house, then turning to look up at Melinda. Melinda is sitting halfway up a staircase, mumbles something to Vic, then gets up and disappears up the stairs. Vic begins to follow her, then abruptly turns into another doorway halfway up the stairs. Clearly, these two are not on good terms. Maybe it’s because Vic is retired after having invented the chip in drones that finds and kills people and being “rich as fuck” to quote his friend Grant (Lil Rey Howery). Or maybe it’s something else.

Adding to their misery is Trixie, whom Melinda appears to hate, but only when she notices Trixie in the same room with her. Vic doesn’t hate Trixie, but doesn’t seem to care a whole lot about her either. More like he tolerates her while going through parenting motions like giving her a bath or taking her to school. And what did Trixie ever do to them? I mean besides ignoring Melinda’s pleas to stop telling Alexa to play the same song over and over at ear-splitting volume and, asking Vic if he murdered Melinda’s boyfriends while also condoning the murders if he did and hinting that she might not keep it to herself? I mean, can you blame Trixie? What kind of asshole parents intentionally name their daughter Trixie?

I know what you’re thinking…what song? And, yes, you read that correctly – Melinda’s boyfriends are not a secret to Trixie. Nor are they a secret to Vic. In fact, he is well aware of them, apparently even condoning them. After the first couple of scenes, we meet Melinda’s current boyfriend, Joel (Brendan C. Miller), at a party at Grant’s house. Joel literally thanks Vic for being so cool about inviting him into their home and letting him have a relationship with Melinda. Since I had not read the film’s synopsis, nor had the trailers even hinted at this, I was confused and intrigued at the same time. All I knew was the film was billed as an erotic thriller, so my brain immediately starting coming up with different sexual fantasies and situations that could explain this setup, plus what kinds of scenes we were about to witness. Then, Vic proceeds to scare the shit out of Joel by telling Joel that he murdered the last guy that Melinda had a relationship with.

Turns out, Vic just doesn’t want a divorce, so he tolerates his wife fucking every hot dude that comes along. Why, you ask? Beats me. Maybe he just doesn’t want to be like Ross from Friends. Maybe Melinda is the best lay in the history of mankind. Maybe he just wants to go Soylent Green on these dudes and feed them to his pet snails. Yes, he actually has pet snails. Don’t all retired engineering geniuses with hot, unfaithful wives have pet snails? The point is we don’t know because the film doesn’t ever tell us how they got to this point in the first place.

And now you see where the writing utterly lets down the viewer. Melinda and Vic have no motivation we are ever made aware of to explain this bizarre situation. We don’t know what led Melinda to the point where she is banging other men nor how she feels about Vic at all. We are quite literally introduced to her staring daggers at Vic, then indiscreetly having sex with other dudes…in her and Vic’s home…while Vic is in the house. Ordinarily, this behavior would make us sympathize with Vic. Except, we don’t because Vic is at first okay with Melinda’s behavior, then dances once time with a friend, Kelly (Kristen Connolly), at a party but it’s totally innocent – even though we are absolutely rooting for him to get naked with Kelly, not just because of Melinda, but because Kelly’s husband is an ass hat – then plays with his snails a bit, then becomes jealous to the point of actual murder. The only sympathy we have at this point is for the snails having to put up with this shriveled sac of a human.

Rating: Not even worth the toilet paper it was written on.