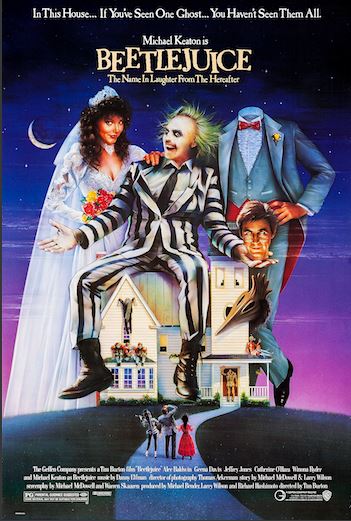 A New England couple is dismayed to find death more complicated and chaotic than life.

Beetlejuice is a wildly outrageous film made by the great Tim Burton. This is a film that demands multiple viewings to be fully appreciated. Beetlejuice was initially supposed to be a horror movie, but the performances by Michael Keaton as the unhinged bio-exorcist, the unfortunate dead couple, Adam and Barbara, and the whacky trio that occupied the “haunted” house made this film something much more intriguing and loveable. Like in The Nightmare Before Christmas, it was Tim Burton’s special effects that totally stole the show.

The Story: Adam and Barbara (Alec Baldwin and Geena Davis) are a couple who are remodeling a charming New England house. After an unfortunate auto accident, they return home, wet and bewildered, only to come to the conclusion that they are both dead.

They find in their house the dreaded “Handbook For The Recently Deceased” and come to the realization that they are trapped as ghosts for 100 years, unable to leave the house. One step outside thrusts them into a bizzarro nightmare world of unimaginable horror.

One of the key elements of Beetlejuice is the morbidly hilarious and chaotic reality of dealing with the bureaucracy of death. The after death cottage industry was as hilarious as it was macabre. If you think the wheels move slow while you are alive, just wait until you are dead.

The Players: In one corner we have a sweet and attractive New England couple who just want to get the intruders out of their house. The intruders are not really villains, but are the eccentric and somewhat annoying Charles and Delia Geetz (wonderfully portrayed by Jeffery Jones and Catherine O’Hara), who purchased and remodeled the house that the Maitlands formerly lived in. Also moving in is Lydia (Winona Ryder), their 13-year-old daughter, who is the original disconsolate Goth Brat™ that has an uncanny ability being able to actually see and interact with the ghosts.

There are other noteworthy performances like Otho (Glenn Shadix) who was the Geetz’s insufferable interior decorator and Juno (Sylvia Sydney) as their hilarious but exasperated and chain-smoking A.D. case-worker.

As you might imagine though, it was Michael Keaton as Beetlejuice that really stole every scene he was in. Beetlejuice was a bio-exorcist, meaning that instead of removing ghosts or evil spirits from humans, he removed humans from dead people. From the looks (and most likely smell) of Beetlejuice, he had been dead for a long time. Beetlejuice was as aggressive and obnoxious as he was lacking in basic couth, but the young couple was desperate to get the intruders out. Therefore, they summoned him…Beetlejuice…Beetlejuice…Beetlejuice in spite of the subtle warnings from Juno.

Even though Keaton was only on screen about 27 minutes of the film, he blew the character away. Beetlejuice was about as indiscreet as the asteroid that hit the Yucatan 65 million years ago. It is not a wonder that the long dead did not want him around. Don Logan in Sexy Beast had nothing on this guy. We never knew what he really wanted, but he wanted it, and was a runaway train with WD-40 for brakes.

The Visuals: Just, wow! Tim Burton did all the cinematography for less than one million dollars and before CGI. Burton really juggles the beautiful with the gruesome, hallucinogenic and surreal. From the sandworms in the nightmare world outside of your prison of death, to the charming but creepy village in which Beetlejuice had taken up residence, I’ve never seen anything like the visual cornucopia in this movie. Beetlejuice actually won an Academy Award for best makeup, and rightfully so.

Predictably, a totally unique work of art like Beetlejuice got lukewarm and mixed reviews from the critics. I get it, I understand, but do not agree. After nearly 35 years this great film has stood the test of time and is more than just a cult classic.

8.0/10.0 With The Goatesians Rating Of Gets Better With Every Viewing