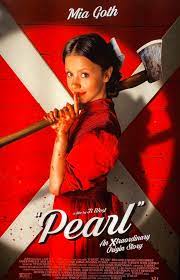 What’s wrong with Texas? Everything

“Pearl” – Houston, we have a problem.

When I walked out of the theater after watching Pearl, my initial response to “what did you think?” was “I was bored.” What I couldn’t articulate at the time was why I found the film boring. On the drive home, my thoughts kept circling around the fact that I had not seen X (released earlier this year), the film to which Pearl is a prequel. Was there something in X that was needed to bring some context to Pearl? Was I bored because I was expecting more from Pearl due to knowing that X was about people filming a porno at a rural Texas ranch, then getting slaughtered by the ranch owners?

By the time I arrived home, I had settled on the latter explanation. Essentially, I thought I was bored because my expectations of sex and murder were not met. The next morning, I woke up with my epiphany light bulb flashing brightly. True, the film did not deliver on anticipated rated-R content, but the boredom was due to the film being entirely devoid of suspense. If there is one thing that a horror film absolutely must have, it’s suspense.

(SPOILER ALERT – The fact that I already told you the film lacks suspense is spoiler enough. The rest is just telling you why.)

It’s the year 1918 and young Pearl (Mia Goth) lives on her family’s Texas farm with her mother (Tandi Wright) and her wheelchair bound, paralyzed father (Matthew Sunderland). Pearl has dreams of becoming a dancing actress in “the pictures” (movies) and performs for their livestock when she isn’t performing for herself in the mirror. Knowing the synopsis of X, Pearl being set in 1918 confused the hell out of me. I thought X took place in current times, so how could its villain (Pearl) be alive in 1918? Discovering (later) that X takes place in 1979 didn’t resolve that confusion. In fact, it just made it harder to believe that a woman in her late seventies is a murderer in X.

I was also confused by Pearl’s demeanor, primarily because her age is so vague in Pearl, due to the way Pearl behaves. The way she is acting around the animals makes her seem like a thirteen-year-old, but we are also told she’s married, that her husband is in Europe fighting in World War I. She may very well be thirteen (it is Texas in 1918 – please refrain from further Texas jokes; we don’t have all night), but the way she dry-humps a scarecrow in a cornfield (not a Texas joke) displays a level of experience far beyond any thirteen-year-old farmgirl. Even in 1918 Texas (yes, a Texas joke).

That scarecrow scene is just one of many that seem to be there to try to convince us Pearl is more than regular crazy, only to be undercut by other parts of the film or even the same scene itself. Gyrating against a straw-stuffed shirt and pants sounds nuts until you see her briefly imagine the face of the town’s theater projectionist (David Corenswet) over the scarecrow’s face, then also remember she lives in the middle of nowhere and misses her husband. Killing a goose with a pitchfork sounds demented until you see her feed it to an (maybe pet?) alligator and remember she lives on a farm. Fighting with her mom because her mom is prohibiting Pearl from going to a dance audition sounds…well, like every mother-teenaged-daughter spat ever. More importantly, none of these scenes serve to build even a sliver of tension or suspense.

The tone of the film doesn’t help with that suspense either. Everything about the film feels like we’re watching a movie from the 1940s, from the layout and font of the opening credits to the musical style to the editing and scene transitions to the sound mixing. It even pays homage to The Wizard of Oz in several places (besides the scarecrow), just in case you weren’t sure what decade of film Pearl was trying to emulate.

Clearly, the film wasn’t interested in building suspense, nor was it particularly interested in tying themes in with the themes in X. I’m not sure the film was even interested in the killings. The killings we witness aren’t cold and calculated or even crazy and calculated, but spontaneous acts of rage borne from self-interest. The killings themselves are neither graphic nor interesting, eliciting nothing but yawns due to being conventional, predictable, and mostly off-screen. The only hint we get at something nefarious and interesting is when Pearl’s mother briefly mentions that she knows what Pearl does when Pearl thinks nobody is looking, including a previous pregnancy. Neat, but we don’t because the movie never shows us.

While Goth does a good job of portraying a young girl wanting to escape her isolated life to pursue her dreams, the movie does a bad job of delivering a character that is actively trying to escape. To be fair, the film doesn’t bother developing opportunities for her to attempt escape. The dance troupe she wants to audition for is nothing more than a local church group that wants to perform in nearby towns. The Spanish Flu epidemic is mentioned several times, including being blamed for the condition of Pearl’s father, yet it never affects anyone in the film that might present Pearl an opportunity. The projectionist shows her an illicit porn film and talks about going to Europe, but literally lives in the projection room and is actually quite the gentleman. Pretty unlikely he’s going to whisk Pearl away.

It’s hard to be interested in a film when the filmmakers were barely interested themselves. Nearly every creative choice about this film was head-scratching and uninspired, leading to a bland movie that already feels eighty years old. When the biggest question the audience wants answered is why Pearl hasn’t fed the maggot-infested pig on their porch to the alligator, you know you’ve made a drab movie.

Rating: Ask for thirteen dollars back, then ask what’s wrong with Texas?