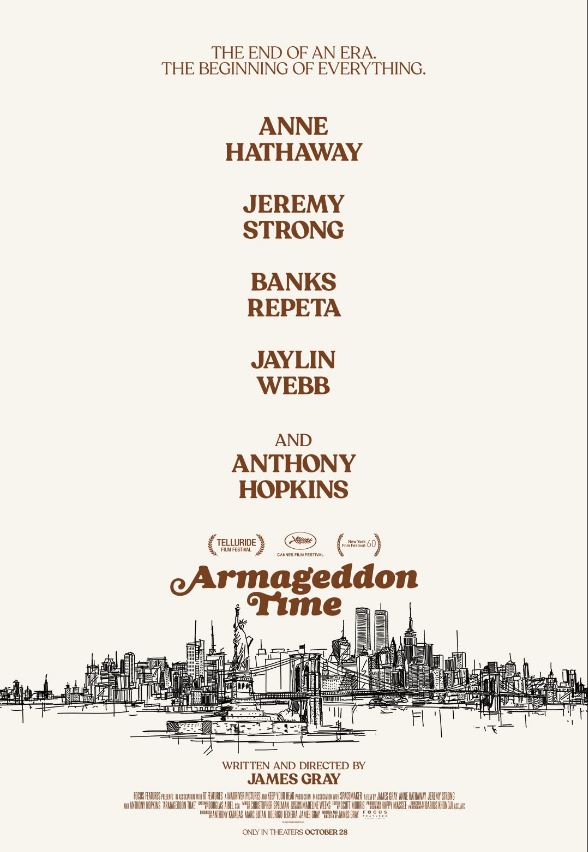 A boring and pointless coming of age story

“Armageddon Time” – What was I saying?

The IMDb synopsis of Armageddon Time is “A deeply personal coming-of-age story about the strength of family and the generational pursuit of the American Dream.” The movie poster for Armageddon Time features the tagline “The end of an era. The beginning of everything.” Such grandiose statements sound like the film is going to show us the childhood of someone like John Lewis, culminating with the march in Selma in 1965 and the signing of the Voting Rights Act. Think smaller. No, smaller. Like, microscopic. There you go.

Written and directed by James Gray, Armageddon Time is a kinda-maybe-sorta fictionalized look at a small portion of Gray’s own childhood growing up in Queens, New York. Depending on the source, it’s deeply personal or it’s loosely based on memories. I have no doubt that they are deeply personal memories for Gray, but the film’s presentation of them plays out like a story you tell where, halfway through, you realize you don’t have a point, but keep talking because everyone is too polite to point out they realized it before you did. Loosely it is.

(SPOILERS – Is it possible to spoil a movie with no plot? Guess, we’ll find out.)

Considering the film barely has a premise, let alone a plot, the only way forward here is to focus on the characters. Gray’s surrogate in the film is Paul Graff (Banks Repeta). Paul is a sixth grader living in Queens in 1980. Paul is kind of a jerk, which isn’t particularly surprising given the end of the last sentence. He constantly gets in trouble in school for disrupting class, he’s rude, dismissive, and openly defiant to his parents, and steals money from his parents. Eventually, he will attempt to run away with his friend Johnny (Jaylin Webb), which involves committing multiple crimes. And we’re supposed to sympathize with this kid?

Not that we can sympathize much with Paul’s parents, Irving (Jeremy Strong) and Esther (Anne Hathaway). Irving is an appliance repairman and Esther is a housewife. Irving has a temper and Esther is president of the PTA. Irving barks orders at his two sons without bothering to get out of his chair and Esther scolds the boys when they ignore Irving. Hathaway and Strong are very good actors and neither of them are given much to do in this film, with the exception of Irving beating Paul with a belt after a particularly egregious transgression. If you had to describe the most obvious and cliched parents of 1980, that’s how you would do it because they were probably your parents too.

Next, we have Grandpa Aaron (Anthony Hopkins). Aaron is the only family member who Paul responds positively to, but that’s probably due to Aaron giving Paul candy and presents. Like Hathaway and Strong, Hopkins is given little to do in this film, resulting in the closest you will ever get to seeing Hopkins phone in a performance. There’s one scene late in the film where Hopkins comes to life – Aaron channeling years of being discriminated against by anti-Semites, angrily imploring Paul not to let racist slurs toward Johnny (who is African American) go unanswered. What makes the scene stand out isn’t that it’s particularly powerful, but that nearly every other scene is so lifeless.

Finally, we have Johnny. If there’s anyone to sympathize with in this film, it’s Johnny. He lives alone with his bedridden grandmother, so is essentially taking care of himself. He puts up with racism on a daily basis, be it from his teacher, other kids, cops, Paul’s parents, or from 1980 Queens in general. The saddest part is that, even at just twelve years old, he’s already well aware of how the deck is stacked against him, yet still harbors a shred of hope of one day becoming an astronaut. If that doesn’t make you root for Johnny, maybe this will…

In the first classroom scene (and opening scene of the film), Johnny laughs at a drawing Paul made and their teacher (Mr. Turkeltaub) goes full racist by ridiculing Johnny for being stupid and having to repeat the sixth grade. In perhaps the most intriguing moment of the film, Johnny responds with “yeah, well you’re the one that taught me.” Whoa…is this movie going to be about the frequent and escalating clashes between Johnny and Turkeltaub, ending with one of them murdering the other? Not only was that many a student’s American dream, but that would assuredly be the end of an era and the beginning of everything.

Unfortunately, nothing remotely interesting appears to have happened in Gray’s childhood. In fact, this film is confirmation that Gray lived arguably the most common life imaginable. So, what’s with the synopsis? The only strength this family exhibits is the ability to begrudgingly tolerate each other while simultaneously bickering with each other. The family’s so-called American Dream is paying gobs of money to send Paul and his brother to an expensive, all-white private school for a chance at a “seat at the table,” except Paul’s dream is to be an artist and Paul doesn’t want to leave his current school. And don’t even bother trying to decipher that nonsensical tagline unless you enjoy brain bleeds.

The frustrating thing about the movie is that every attempt at making a point falls flat. We see the racism Johnny has to deal with, but the film just shrugs its shoulders with Johnny at the inevitability and inertia of it. There is an allusion to anti-Semitism, but the fact that the family is Jewish only seems to be noticed by the family itself. Gray tries to shine a spotlight on white privilege, but the film almost seems apologetic about the spotlight. There’s even an indictment of Reaganism, conservatism, and Trumpism (including a head-scratching cameo by Jessica Chastain as Maryanne Trump) that lands with the same impact as a fart in the wind, primarily because it’s almost all literal background noise.

If there’s anything to learn from Armageddon Time it’s that Gray is convinced his childhood has something insightful to say, but forgot what it was. This kind of seems like a theme with Gray, considering his last two films – The Lost City of Z and Ad Astra – were similarly flat and aimless. It kind of reminds me of a college roommate I had who insisted on listening to the same music over and over and eventually I had to tell him to stop. See what I mean?

Rating: Ask for all of your money back and the beginning of everything.