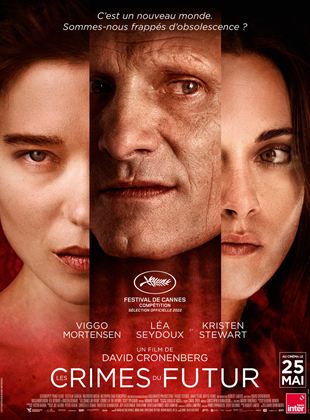 Crimes of the Future

Humans are evolving and David Cronenberg makes it gross

There are interesting concepts, but they never fall into a cohesive narrative. In this future, most humans have evolved to no longer feel pain or become infected by disease and many are growing new organs with undetermined functions, only to have them removed to comply with new laws banning the organs. Simultaneously, a new form of performance art has developed featuring people performing surgery on each other, often featuring the new organs. The ideas of surgery replacing sex and humans evolving to digest toxic waste emerge from those concepts, but are never explored to any real extent. The film is constantly interrupting itself, meandering between the performance art, an office for registering new organs, an undercover operation to break up a ring of plastic-eaters, surgery eliciting sexual pleasure, internal physical beauty, and human evolution providing the solution to humans destroying the Earth. Confused yet?

Viggo Mortensen and Lea Seydoux portray couple Saul and Caprice, a very popular art-tainment duo. Saul grows organs quickly and Caprice removes them. There is good chemistry between the two, though some might be off put by Saul’s constant hacking and coughing from his condition. Scott Speedman as a plastic-eater named Lang puts in a genuine attempt to bring depth, but his storyline is given too little attention for the performance to breathe. Conversely, Kristen Stewart is terrible as Timlin, another character with far too little development and one who mumbles every line as quickly as possible, though we can probably chalk this up to Cronenberg’s creative choices. The best performance comes from Lihi Kornowski, who has just two scenes playing Djuna, the mother of a plastic-eating child. Her horror at her son’s trait is palpable, eclipsed by her later certainty that killing him was justified. Nothing else in the film comes as close to hitting its mark the way Djuna does.

As both writer and director, Cronenberg focuses too much on the body horror rather than telling a good story. Cronenberg misses opportunities throughout the film to make it a compelling watch. Is it supposed to be a commentary on the destructiveness of human industry? The beauty of human physiology? The collective fear of change? Fetishes run amok? Government control? Pick a lane, man.

The score ratchets up the creepy vibe, enhancing the visuals, especially the surgical performances. The visual effects are a bit uneven, from really good makeup to bizarre set pieces that look like they are all made from intestines. The surgeries themselves aren’t particularly believable, but they look and sound squishy.

Seydoux deserves to be on an early list of potential best actresses, but likely not a top five choice. I’d throw Kornowski a supporting nod, but her role was just not significant enough. Nothing else sticks out, as the film is weighed down by too many half-baked ideas. Cronenberg should have spent more time fleshing out the story rather than physically fleshing out the movie.