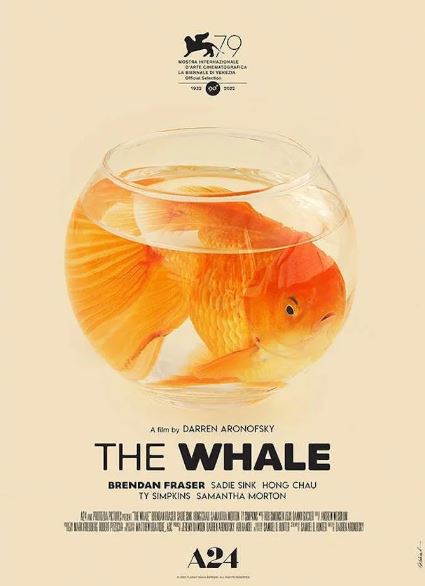 We are all chasing something

Going into Darren Aronofsky’s latest film The Whale, I prepared myself for at least one disturbing scene that would sear itself into my brain next to scenes from Requiem for a Dream and Black Swan. Like Stanley Kubrick, Aronofsky tends to make weird and dark movies, some of which feature scenes you cannot unsee. To this day, I can’t see Jennifer Connelly without my brain momentarily flashing to the end of Requiem for a Dream and my body doing an involuntary shudder. Yuck. It just happened again.

Charlie (Brendan Fraser) is a morbidly obese English professor who has issues. Not just that he is literally eating himself to congestive heart failure, but is grieving the death of a loved one, estranged from his daughter Ellie (Sadie Sink), divorced from his ex-wife Mary (Samantha Morton), and a gay man living in Idaho. He has become such a recluse that he teaches his course online with the camera disabled, never leaves his apartment, and has just one friend left – Liz (Hong Chau), a nurse who takes care of him.

We meet Charlie in the flesh when a missionary named Thomas (Ty Simpkins) knocks on Charlie’s door just as Charlie appears to be having a heart attack. Charlie beckons Thomas in, implores Thomas not to call 911, and insists Thomas read to Charlie an essay about Moby Dick. After a few minutes, Charlie’s heart decides not to kill him just yet. Thomas asks Charlie what was the point of reading the essay and Charlie responds, “it makes me feel better; it’s a really good essay.” By this time Liz makes her initial appearance, scolding Charlie and imploring him to go to the hospital and deal with his condition. Charlie refuses on the grounds of money and Liz resigns herself to comforting Charlie as they watch TV.

This scene gives us the stakes – is Charlie going to listen to his best friend or even a possible sign from God or is Charlie going to complete his suicide by food? The scene also establishes the main Moby Dick theme. Seems pretty straightforward, but Aronofsky doesn’t do straightforward. Besides the two obvious references – the essay and Charlie being a whale of a human – everyone in this movie is either Ahab, the whale, or both. This brings us to Ellie.

Charlie knows he is dying, so he chases the only whale left to him – reconciliation with Ellie. This is not going to be easy since Ellie hasn’t seen Charlie since she was eight, is well aware of why Charlie left them, and is now sixteen and her own mom calls her evil. This should be fun. Angry, hormonal teenagers who feel abandoned by their parents are historically rational, thoughtful human beings.

The remainder of the film takes place over the course of a week and it’s a hell of a week. The emotional beats hit often and hard, everyone revealing an anger at something or someone that has driven them to this point in their lives. Charlie’s health is deteriorating quickly, hammering home a sense of urgency that if Charlie dies, all of their personal whale hunts will fail. Every time he eats a sandwich or clutches at his chest, we tense up because nothing is resolved yet. This being an Aronofsky flick, there’s a good chance this film ends without those resolutions.

What makes this film so gripping is the combination of great performances and the choice to enclose the entire film in Charlie’s apartment. Like Charlie, we are trapped in his apartment with no way out. When the emotions start flying, many of the scenes feel like a live wire is exposed. Electricity emanates from all the raw nerves in Charlie’s apartment, none more than when Ellie and Charlie are alone together. With respect to Chau, Simpkins, and Morton, Sink and Fraser are on another level. The two of them are a force together, Ahab and Moby Dick doing their final dance. But who is whom?

Besides the stirring performances and great story, I appreciated Aronofsky resisting the temptation to go weird and dark. It would have been very easy given Charlie’s physical appearance. Several elements in the film could take scenes in visually and mentally disturbing directions, but Aronofsky wisely avoided them. Had he given into that temptation, much of the emotional impact would have been lost to spectacle. Instead, the movie and characters stay grounded in a reality that is much more relatable. Now, we have images seared into our brains that we won’t mind revisiting whenever we see Fraser or Sink again.

Rating: Worth every penny and, hey, no new shudders.