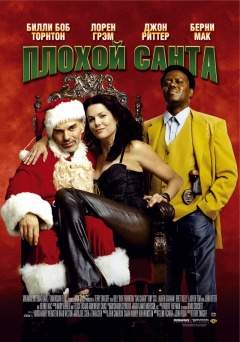 Depressive alcoholism, crime and Christmas converge in perhaps the best Christmas movie ever made.

Like few films this year, I was rooting for Terry Zwigoff’s Bad Santa to succeed. I hadn’t expected much at all, though, until reviews started pouring in about its hilarious meanness and uncompromising vision of a drunken, hateful mall Santa and his equally vicious elf, who also happens to be a real midget. And with gasbag Bill O’Reilly stepping up to condemn the “assault on Christmas,” I figured that at the very least, the film would slash and tear everything people held dear about what must be America’s silliest, most unconstitutional holiday. And yet, although the film has moments of mirth and wickedness, this is yet another example of inflated expectations that were not met with what I saw on the screen.

In fact, it could be argued that I laughed more at the reviews and the giddy anticipation of watching kids being assaulted, X-mas displays being destroyed, and holiday values being mocked without apology. Overall, Bad Santa is a joyous romp that deserves to be seen by anyone fed up with what seems to be a compulsory seasonal cheer (and don’t even get started on the commercialism of Christmas, lest you be branded a communist who collaborates with terrorists), but it won’t drive you to fits of jubilant laughter. I chuckled, even reared my head back on one occasion (when the late John Ritter referred to midgets’ digits as “sausage fingers,” a term I thought I had invented years ago), but I was not transported. 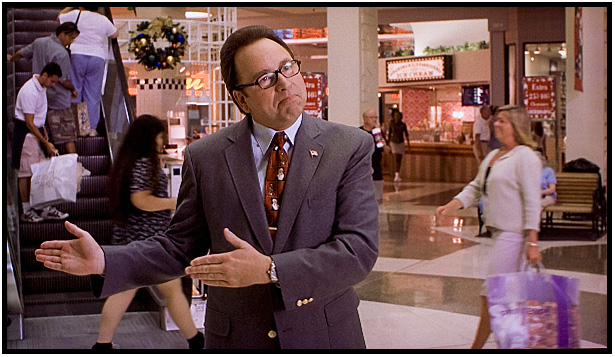 But I was endlessly charmed by Billy Bob Thornton as Willie T. Soke, a traveling mall Santa who works with his friend and partner Marcus (Tony Cox) in robberies of the stores where they work. They make enough money with their crimes to last the rest of the year, which for Willie entails nothing more than sleeping, eating, drunken rages, and endless rounds of nasty sex with both large women and those with Santa fetishes. As we meet up with Willie this time around, he and Marcus have settled in Phoenix, working for a large department store managed by Ritter and inhabited by chief of security Bernie Mac. Not much is done with these characters, except to have Ritter act appalled by Willie’s language and Mac threaten him with exposure unless he shares half of his take. The other central figure is a sad, overweight child named Thurman (Brett Kelly), who wants to believe Willie is the real Santa, but really just wants a friend. 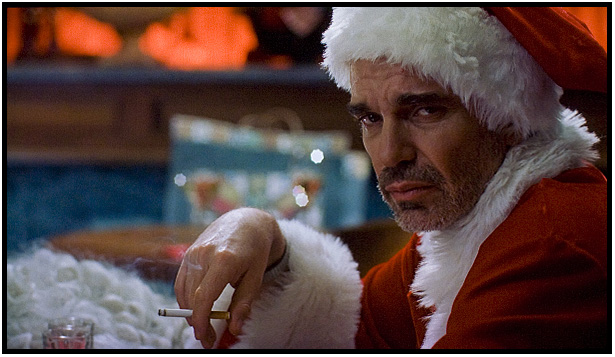 The best parts of the movie involve Thornton’s work as Willie. He is bored, usually drunk, wets himself often, and has no concern for the “fragile” psyches of the children. He screams at them, uses healthy amounts of vulgar language in their presence, and pushes them around without regard for their Christmas wishes. When asked if he has any children of his own, he responds, “No, thank the fuck Christ,” with a sneer that elicits applause. Thornton’s character is any cynic’s dream come true–he hates children, uses Christmas to line his own pockets, and has nothing but horrible memories of both the holidays and his own family.

In this way he acts as a martyr for all of us who have wanted to opt out of the holiday season altogether and cannot stand the thought of yet another extended period of carols, apple-cheeked (and snot-nosed) children, and overt displays of the world’s wackiest religion. And even with Willie’s overall disgust, he still doesn’t go far enough. Hating children is a good start and controversial enough in this country, but a truly revolutionary film would have blasted Christianity with an equal fervor. Thornton does refer to the Christmas tale as a “boring story,” but I wanted a level of invective that would have brought the full weight of the Religious Right on the film’s head. Until calls for a boycott are made and the “proper” people are offended (O’Reilly merely expressed his disapproval; without seeing the film of course), a film is not truly subversive.

The plot thrust involving Thurman the fat kid had the potential to become sentimental tripe, and it does “soften” the film to a certain extent, but the ending is not as gooey as it would have been in a film more concerned with box office appeal. Up until the last few moments, Willie treats Thurman with contempt, although their relationship eventually develops to the point where Willie becomes a mentor and father figure and helps Thurman stand up to some neighborhood bullies. This seemed inevitable, although it was a joy to watch Willie punch a teenager in the face over and over and over again. It was even more joyful to then listen to Willie explain to Marcus that he felt he really did something constructive by beating up the teenager.

Fatty Thurman even becomes creepy; the sort of kid who obsesses over trivial bullshit and in a way, warrants mistreatment from other children. As such, Thurman is not a sympathetic child because he is so clueless and so utterly pathetic in his willingness to accept the abuse thrust upon him by Willie and others. Yet the film doesn’t have any more imagination than to have Thurman get his revenge on the main bully by kicking him in the balls. If the film had wanted to be truly sick, it would have thrown in a murder plot in there somewhere rather than a cheap and obvious joke. How about knifing the bully in the neck? Or blasting him with a rifle from a rooftop? I understand that Thurman is a pussy, but he could have become more of a man than the film allows.

In the end, Willie and Marcus are caught in the act during their final robbery, immediately after Marcus turns on Willie and threatens to shoot him for being too stupid and drunk to care about his work any longer. Marcus had also murdered Bernie Mac’s character, which was a subplot (also involving Ritter’s character trying to find something in Willie’s background that would have served as grounds for dismissal) that didn’t really go anywhere. It was during these final moments (actually about the last 15-20 minutes or so) that the film ran out of gas. The premise was so rich with comic possibilities and the early scenes so refreshingly indecent that it simply could not sustain itself.

Hell, I would have been content to watch Willie hassle children and beat up reindeer for 90 minutes. Also, things seem to work out for Willie, as he lands in the hospital after being shot by the police and the subsequent publicity about an unarmed Santa being gunned down while delivering toys to a fatherless child helps him avoid prison. This is a compromise of sorts, because Willie seems to have “turned a corner” (a phrase he relates to Marcus after pummeling the bully) and just might change his slovenly ways. And that simply will not do. We need more Willies in American cinema; defiant, vicious, and iconoclastic until the bitter end. There’s no better antidote to the spirit of the season than a little old-fashioned depravity.

**UPDATE, October 2006: I hereby retract anything and everything negative I had to say about this movie, and declare for all to hear that it is now among my personal favorites. I love its cruelty, savagery, mean-spiritedness, and unending bitterness. I must have been drunk, stoned, and/or temporarily retarded to suggest that there was anything wrong with it. Thank you for your understanding.

The movie was so good, Goat was compelled chime in as well.

Bad Santa is a courageous effort and the Holy Grail of all Anti-Christmas movies. In this review, I’m not going to concentrate on the plot that much, so if you haven’t seen this dark comedy, please rent, buy or stream for a wonderful, uplifting experience. All I can say is that this movie is irreverent and convulsively hilarious. 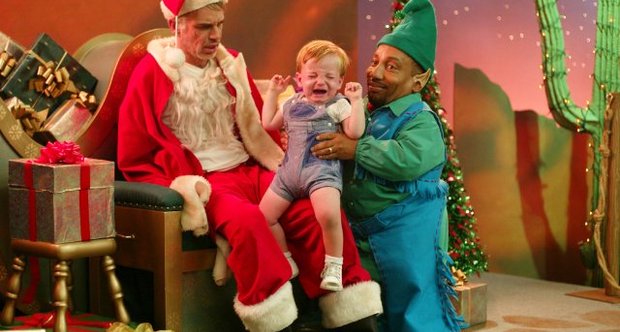 The character development in this movie is nothing short of amazing. No other actor in any universe could have pulled off this role so well and taking the part would have been career suicide for most. Billy Bob Thornton embraced and absorbed the character of Willie T. Stokes as second nature. Willie is a hopelessly depressed, suicidal, profane and a deeply misanthropic alcoholic shell of a human being, and that is Willie on his good days. Willie makes nihilists look like chirpy optimists as he cares about nothing in life, except for an endless stream of cigarettes, alcohol and broad-beamed women. There is total disdain for anything and everyone, especially himself, as Willie has no compunction about punching out one of Santa’s reindeer or an adolescent skate-boarding bully.

There are so many scenes that showcase Willie’s anti-social and vulgar disregard for all decency, but the scene in the bathroom with the turkey leg characterizes his world view all by itself. This department store, safe-cracking Santa, who affectionately refers to the product-whoring “little shits” who sit on his lap, is not even the darkest and most sinister character in this movie. That distinction belongs to his partner in crime, Marcus.

Marcus, played by Tony Cox, enhances the resume of this tandem of thieves, being a midget, and a Black midget to boot. Don’t let his stature or exterior demeanor fool you, Marcus is a ruthless and cold-blooded murderer and the scathing indictments that he hurls towards the unrepentant Willie could peel the very essence away from a normal human being. Taking no prisoners, he verbally eviscerates the much larger store security chief, played by the late Bernie Mac. In a vulgar, insult-laden torrent of vitriol and sexual innuendos, he demolishes Gin, who had referred to him as thigh-high. 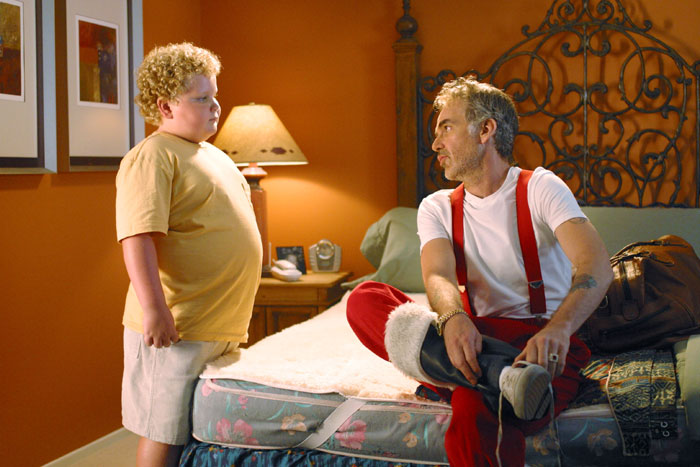 The supporting cast is superb and I will briefly touch on some of the highlights. The body language and the facial expressions of John Ritter, who played the floor manager of the department store, are alone worth the price of the DVD, as he displays his obvious consternation when discussing sexual matters. Brett Kelley played The Kid, Thurman Merman, who was a snot-nosed bully magnet and Santa stalker that gave all the appearances of being an incubating serial killer. Cloris Leachman, the cadaver-like guardian of The Kid, was a sammich making machine, and the scene where she appears to be near death is absolutely hilarious. The only normal character in the movie was Sue, played by Lauren Scott, that is if you consider normal to be an overly cute barmaid with a Santa fetish who picks up and fornicates loudly with Willie in the front seat of a stolen car. Yes, its just that kind of Family Values type of movie, and I loved it.

I’ll leave most of the spoilers alone, and the plot did become a little pedestrian at the end with the annoying attempt at redemption for Willie, but no mind, Bad Santa is Christmas Classic. If you take Christmas very seriously, this movie is probably not for you. For those who view nothing as sacred, this movie is an exquisitely delicious tour-de-force of a no holds barred Christmas movie.

Check out the review for Bad Santa 2 here.