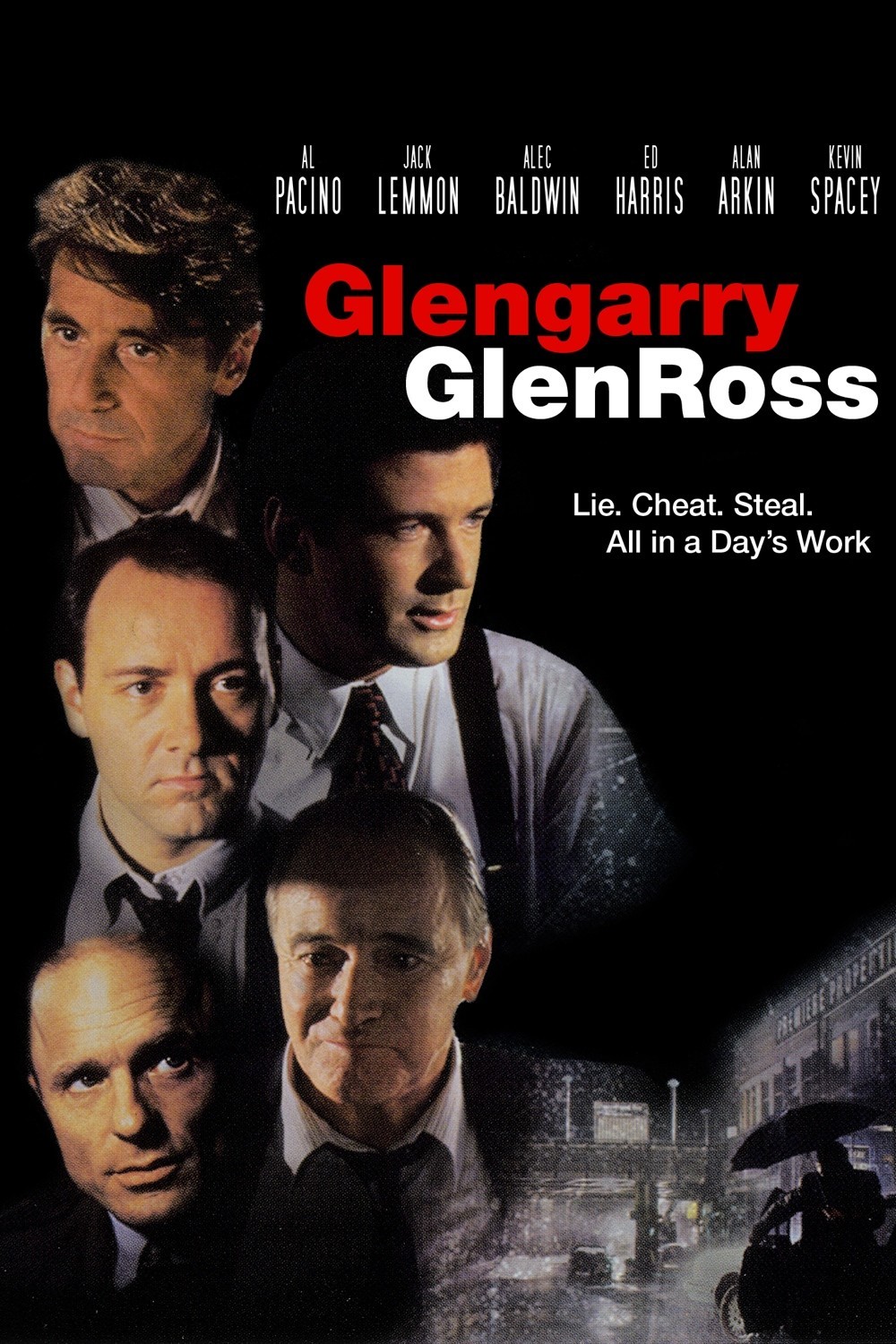 A wonderfully acted and scripted movie about the harsh world of sales.

Few films have been as woefully misunderstood as James Foley’s 1992 adaptation of the Pulitzer Prize-winning play by David Mamet. Some critics, fired by a loathing of all things Mamet, have blasted the play as an extravaganza of profanity and machismo; fevered mania that wallows in its self-conscious style and depraved one-liners. “Put that coffee down!” people cry, as if the essence of the play could be reduced to a catch phrase. Of course, there are memorable lines that drip off assorted acid tongues like the venomous gold that they are, but this is more than a shouting match between Oscar winners and other Hollywood heavyweights.

At its core, the schemes and plots of a few real estate salesmen round out what for me is the most sustained attack on the essence of the American character ever penned; Americanism itself, in fact. Perhaps Death of a Salesman is its looming father figure, but Mamet’s blast sustains a more stinging truth because its characters no longer believe in the bullshit they’re peddling; that is if they ever did. Willy Loman was deluded and pathetic — a discarded sap of heartless capitalism — but he remained a true believer. Roma, Levine, Williamson, et al are, in contrast, not only phony, but frightening in their chameleon-like ability to confuse, distort, and cater to the most grinding form of self-interest. These aren’t company men so much as islands unto themselves. They might work for others, but know no loyalty save the dollar-encrusted ego. As the company itself operates in the same manner, it’s a relationship that works to perfection.

These men attempt to sell worthless land to worthless customers, and what makes it so depressing is that everyone involved knows the score. Lonely fools fill out a card knowing full well that a pushy salesman will come to collect, and yet manage to act affronted by the suppertime phone call. The dance of the sale is a wonder to behold, even more so because the strings are always showing. The customer, smiling and even semi-interested, nods at the lies passing for truth, yet the glassy-eyed stares betray poverty and a lack for anything better to do. It’s a conversation; perhaps not one worth having, but the voice on the other end is an illusion of community and connection in a system that values only exploitation. Left-wing bullshit, you say? Not one person in this film — a perfect microcosm of our culture, if not the world — has a genuine attachment to anything. Even Shelley’s frantic calls to check on his daughter’s condition seem forced — not by Jack Lemmon as an actor, but by the man himself. After all, appearances are everything. What would people say if he didn’t pay his bills or act like a concerned father?

In many ways, Ricky Roma (Pacino) is the most authentic person in the film, largely because he’s so obviously (and joyfully) a complete fraud. Not one word escapes his lips that isn’t calculated for maximum effect. Despite the male-oriented nature of the environment, one longs to see Roma chat up a female or two, if only for comparison. One has little doubt that by the end of a few rounds of drinks, he would have her convinced that it would be to her advantage to take a load in the face without objection. There’s also a great deal of homoeroticism in the film, and not so buried that it needs to be considered subtext. After all, what is the sales game but a form of flattery and flirtation between two men? I remember a short film from years ago called Ray’s Male Heterosexual Dance Hall, that placed corporate suits in a room where they danced with each other while talking shop, offering favors, and cutting deals. Reduced to its essence, buying and selling is merely another form of sex, whereby one prostitutes a dream for what usually amounts to profit for someone else. We’d deny it, but as men — gay or straight — we’re all taking it up the ass. 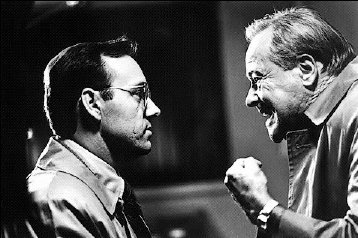 Moreover, the film — not as an endorsement but rather as an explanation — connects one’s manhood to one’s profession, which is the most obvious way we assess each other in the people’s marketplace. As Shelley says with utter conviction, “A man is his job,” but follows it up with “and you are fucked at yours.” The barb not only implies incompetence, but it questions that man’s ability to function as a human being. Why else do we cling with such childish tenacity to titles? We’d sooner accept castration than a reduction from CEO to a mere “manager,” because one implies a level of authority that may or may not translate into anything tangible. In such a world, we can only relate to others through these labels, and once they have been removed, we must actually scrub away the layer of bullshit and explore nuance and personality. And as we know, we’d rather not have to spend any more time with people than we have to — only enough time to, as it is said, “get them to sign on the line which is dotted.”

Fine, the acting is flawless, the outbursts a wonder to behold, and the desperation an insight into these lost souls, but this film is the sort of subversive art that used to get people blacklisted. No one wants to hear that America is a perverted whorehouse, where people come together only out of selfish need. No one wants to know that they too would lie, cheat, and steal in order to maximize their own bottom line, especially when so many want to believe in the benevolence of big business. Rio Rancho Properties is a corrupt, slimy organization from top to bottom, but let’s remember those who inhabit the bottom — those creeps who drive Hyundai’s rather than BMWs have also ingested the corporate wisdom that places decency on the doorstep with the rest of the outdated trash. For every prick that gives orders, there are less bulbous cocks that take such lies as gospel and carry them out, pausing only to inquire about their own percentage of the take.