So there was some killer stuff on the site this week, what with everyone justifiably going bananas over Blade Runner 2049, but did you get a look at Faststeady’s piece on Omaha Hi-Lo? I read it twice despite not being involved in a real competitive poker game against either man or machine since the heyday of [monosyllabic word] + [integer] mall punk. In fact I am more familiar with the city of Omaha that I am with the game that bears its name, as my mother grew up in nearby Council Bluffs, Iowa (Home of The Blue Power Ranger and Teen Mom but not Slipknot, we swear. That’s on you, Des Moines!).

As it happens, that led to an incredibly random but completely true occurrence during the Carter administration wherein your humble columnist once ate lunch with Berkshire Hathaway CEO Warren Buffett, who was friendly with my Aunt Roxy, an acclaimed stage actress and jazz singer in the region. I’m guessing the table conversation was either fascinating or replete with awkward pauses and polite disinterest.

I’d love to tell you that I schooled him on the dangers of hyper-capitalism and warned him that unchecked greed could someday lead us to electing one of his fellow Wharton alums who may well be motivated only by ego and corrupt power, but no dice. It would have been great to have linguistically taken him down a peg, Modest Proposal-style, but I was three at the time, just beginning to wrap my head around object permanence and shoe tying.

Water displacement was probably a rudimentary concept for you, dear reader, but at the time I couldn’t get into the tub without flooding every square inch of our (rented) bathroom floor, let alone figure out how to zing the second wealthiest person in the United States with major league retorts such as save some strained peas for the rest of us, All You Can Eat Buffett! Granted, Mr. Buffett has never been a particularly Falstaffian man, even in 1977, but in this particular historical alteration I figure that everyone would be so in awe of a toddler with such a rapier wit that they would be willing to overlook the flawed premise. 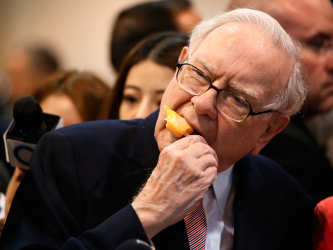 Actually, now that I think back, I did tend to slobber a lot as a kid. Still do, actually. So we can take some solace in the likelihood that at least a trace amount of my drool wound up in the preferred meal of a proto-venture capitalist. If I recall correctly, people who had money in the late 70s ate fondue, which would conceal toddler slobber quite nicely. Luckily the American fetishization of hilariously small portions of un-placeable French cuisine didn’t really go mainstream until the 80s, though by that point I could’ve probably come up with the All You Can Eat gag anyhow. After all, buffets and their attendant unambiguous policy statements also experienced a bit of a cultural renaissance in the 80s.

And that, ladies and gentlemen, is why you should read Mixing It Up at the Poker Tables: Swimming with Fish!

Actually, meandering rust belt casual dining digressions aside, I really did want to endorse and promote Faststeady’s article because I would like to think there exists a certain camaraderie among those of us assigned to the Degenerate Gambling Department here at Ruthless Americas Continental Global Universal headquarters (where, for some inexplicable reason, we share a conference room and a dorm fridge with the Drugs Department and the Alcohol Team; go figure!). As stated supra I’m not much of a poker player, though I do know how to spot idiots thanks to this very helpful series. When it comes to table games, Ive always been a fan of the bones. Then I married a left-brained type who can keep her head on straight while using Hi-Lo, Halves, and Zen counts, with or without the hindrance of well vodka. This has certainly made blackjack more interesting. 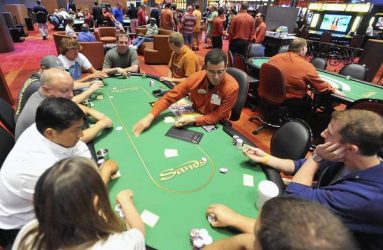 Believe it or not, I’m not as dumb as I look, sound, read, or test. Football season is already half over. Furthermore, as you may have noticed, the site is called Ruthless Reviews, not Ruthless Well-Reasoned If Not Always Successful Football Picks. And believe me when I tell you that I could watch movies all day every day for years on end and repeatedly take 1938: Motion Pictures Greatest Year quizzes until I got perfect scores, and I still wouldn’t be fit to lick the popcorn buckets of the folks who review films around here. So what good am I when the season is done?

Then it hit me. I spent last weekend at Mohegan Sun in order to catch Gegard Mousasi v. Alexander Schlemenko at Bellator 185 and there were idiots everywhere! Stereotypical MMA goons, elderly people who camped out in line for upwards of eight hours for Paul Anka tickets, bottle-service nightclub douchebags who didn’t know about the Paul Anka concert and figured they would hang around anyway so they could drink for free and take out their frustrations on the poor dealers. I’d never seen so much material gathered in one place. And the casino itself, sweet Jesus! I could talk about the eight-ounce domestic beers, or Connecticut’s laws about only having access to one drink at a time, or the 2:00 cutoff (in a casino?!?!?!) right down to the omelette lady, who oiled her skillets with the care and finesse of Captain Joseph Hazelwood. Think about it: Idiots of the Baccarat Table, Idiots of the Flip-It Machine, Idiots of Whatever The Hell They’ve Been Talking About Recently That Apparently Involves Gambling On Pac-Man. Maybe I could write here all year round! Lets cut to the live feed of Goat’s office to see what he thinks of this idea!

Perhaps now is not the time.

That live look-in of Goat’s office was brought to you by Jimmy Johns. Jimmy Johns: Because most college kids are too poor, hungry, and/or drunk to care about our owner being a total asshole. 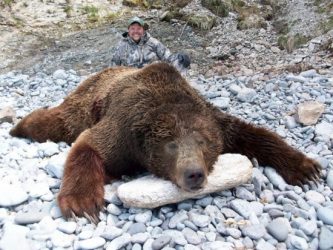 Look, I’m a Mets fan. Saying anything nice about Philadelphia, other than the soul (e.g. The Delfonics, not the arena football team) is anathema to me. But damn if the Eagles aren’t 6-1. I actually picked up a unit on them during the Monday night game, and despite double-clutching in the first quarter Carson Wentz threw for 268 and a 4:1 split against respectable division rivals who came into town with a winning record.

San Francisco hasn’t won a game all year, and now on top of that they have to play with heavy hearts after last weeks tragedy in Mountain View. In all honesty, I really do try not to judge younger people and youth culture, so as not to embrace the stereotypes associated with husky, white forty-somethings. So it was kind of frightening to read this sentence: Lil B had the sheer balls to suggest that either PnB Rock or A Boogie wit da Hoodie sounds like DeJ Loaf, and so both of them, along with maybe 10 other people, put a shoe on him backstage at a LCD rap festival in the Bay Area. Thank God I read enough music criticism to know who Lil B is, otherwise that may as well have been written in Urdu. Not recognizing the names of rappers is like a top five husky white forty-something stereotype! Next thing you know I’ll start to talk like Black comedians imitating white guys, and then its all over. Next time I’ll be one of those clowns in line to see Paul Anka! At least I’ll be able to afford good seats. Go where the Eagles dare, you Goddamn son of a bitch.

I don’t get this line at all, save for the fact that the Patriots aren’t quite the machine of destruction they were expected to be at the beginning of the season. Not yet, anyway. Part of the is due to them being the third most injured team in the NFL. Obviously, the most impactful loss was Julian Edelman (torn ACL) but the current Pats IR list also includes Danny Amendola (undefined knee issue), Donta Hightower (torn pectoral), Stephon Gilmore (concussion), Malcom Brown (received Red Ryder BB gun with compass in the stock and this thing which tells time for Christmas), Jacob Hollister (trampled by circus elephant), Cassius Marsh (trampled by wild elephant), and Lawrence Guy (trampled by Timothy Olyphant).

Still, New England is 5-2, though 3-4 ATS. Perhaps this line is an over-correction then. However, if Belichick is good at anything, its plugging holes, and I think its fair to think that their 16-point beat-down in last weeks Super Bowl rematch might be a return to form.

Yeah, I’m going there again. I don’t make excuses in this column, but I think its fair to point out that the Chiefs won that game twice before losing, as there were two un-timed downs brought about by defensive penalties on plays where Oakland failed to score, followed by the one time that they did. It was a hell of a game, too, with about seven lead changes and enough at stake due to the shared division that Jim Nantz and Tony Romo (who, God help me, is rapidly growing on me as a play-by-play guy) said that Oakland’s season was at stake. It wasn’t, of course (couldn’t they just win out beginning with this weekend?) but it made the broadcast feel important.

The Chiefs recent collapse has them at a pathetic 5-2, both straight up and ATS. Denver, meanwhile, finds themselves in the worst possible position, as the Chiefs can instantly double-up the rest of the AFC west with a win here. Trevor Siemian has thrown one more TD than his interception total for an 8:7 split thus-far, and his QB rating is actually lower than it was last year at 82.5. With an eye for talent like that, no wonder John Elway feels comfortable meddling in the Supreme Court nomination process.

Finally, Halloween is Tuesday. We’ve got Rangers tickets that night, so the wife and I are going as the Hanson Brothers. If for some reason you find yourself in the Garden that night, come buy me a beer. But if you’re at home, turn on your damn light and give people some candy. Yes, even teenagers, and even if they didn’t bother with a costume. Its supposed to be mischievous fun, not an art class project. And by the way, not that I anticipate this being a big problem with Ruthless readers, but if you give out Jack Chick tracts with your candy, you deserve every last egg that lands on your porch, and if you give out Jack Chick tracts instead of candy, I’m defending the kid pro bono on any charge this side of murder.