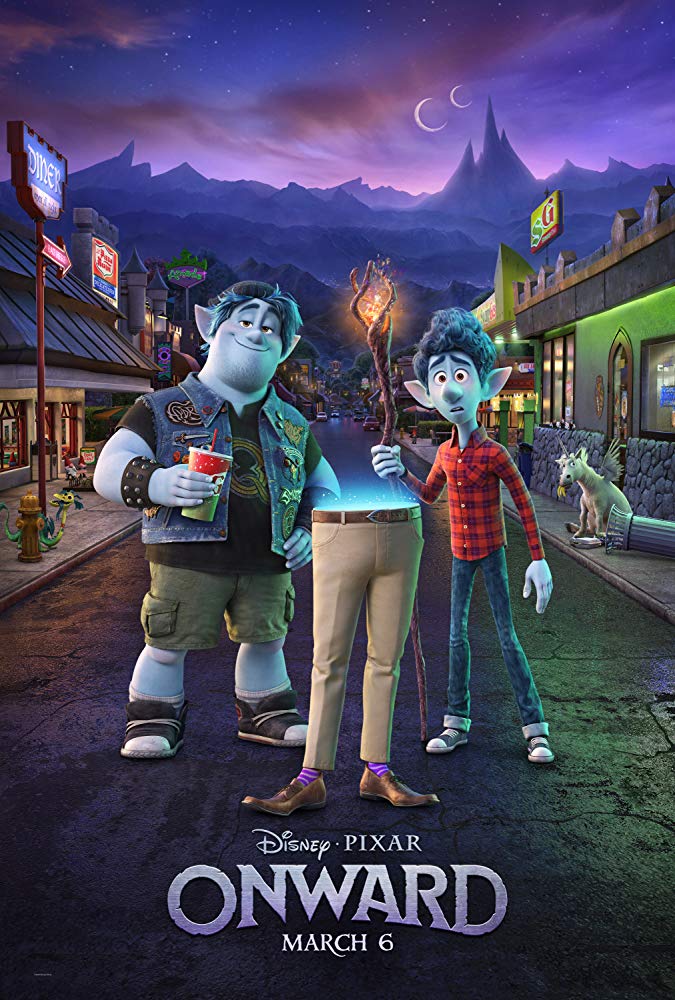 A young boy learns a lesson in fantasy. Plus, magic pants.

The thoughts of a seven-year old are amazing, especially that he is taking care not to spoil too much. Here are some of those thoughts about the latest Pixar movie, Onward.

What is Onward?
It’s a movie.

What is the movie Onward about?
These kids, they’re brothers. They’re like little alien things and they go on a quest to like bring their dad back, because their dad died right when the brothers were born. That’s what it’s about.

Are you familiar with the genre of fantasy?
Uhhhhh…no.

So, what did the aliens look like?
Um, blue elves.

They’re not aliens…they’re blue elves.
Well, one guy looked like a horse.

What do you mean he looked like a horse?
Like, his waist up is a human, and he’s an officer – a police officer. And the rest, like his butt and his legs, are a horse, and he’s weird.

So, he’s a centaur.
He’s a policeman that the brothers’ mom knows.

Her boyfriend? Her husband?
Yeaaaaah…no.

Elves and a centaur. What other kinds of characters were in the movie?
Flying tiny dwarfs. Like a whole army of them.

Who helps them on their quest?
No, [eats a French fry ponderingly] but their dad did send them a map. And a wand. And a phoenix gem. And no friends. Don’t type that, mom.

What are they looking for on the quest?
A phoenix gem.

To do what?
Bring their dad back?

If he’s dead, how do they bring him back?
They have this wand thing – hold on, let me get this bat. [picks up a whiffle bat] They point a wand and they say “ah, Fabrizio!” and they bring half his body back.

What do you mean they only bring half of his body back?
That was in the beginning. But at the end…I’m not gonna spoil it.

Good idea. So, tell me what is the part of his body that comes back?
Feet to waist.

Just his legs?
Yeah, and the brothers put a coat on him. [walks around zombie-esque, apparently evoking Weekend at Bernie’s] …Tom Holland, slash, the younger brother.

Tom Holland was the younger brother and who was the older brother?
No. …Emmett. …Emmett from The Lego Movie.

Did their mom help them with the quest?
Uh, kinda. Not really…?

What do you mean?
She didn’t help ’em. ‘Cause their mom was okay bringing back their dad because they wanted to meet their dad.

What was their mom doing the whole time?
I don’t know …okay, what was the question?

What was their mom doing while they were on the quest?
Their mom was doing…something during the quest. Driving on the expressway, [does air quotes] for help with the Manticore, which is a dragon-scorpion-gorilla-thing.

What was your favorite part of the movie?
The end, where “Tom Holland’s” [does air quotes again] college was tearing apart and became a dragon, because that was the curse, and the Manticore forgot to tell them about the curse. Because there’s always a curse.

There’s always a curse on a quest?
Yes.

Noted. Who was your favorite character?
The fairies. The leader fairy.

Why?
He had a weird voice. And he was like hahahahh-ahah-ahahaha. [waves arms crazily in the air]

Was there anything in the movie that you would change?
[Nibbles on a French fry] Ehhh…nothing I would change.

Do you think parents will like the movie?
‘Cuz it’s good…? [thinks for another minutes, then says more decidedly] ‘Cuz it’s good.

Do you think any kids will be scared by the movie?
Um, no.

Rating:
Should anyone ask for any money back?
Meh…maybe like 5 cents back.