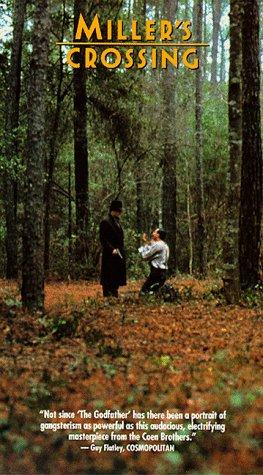 Gangsters, Prohibition and a guy with a gambling problem trying to play both sides

I had trouble finding a hook for a critique of the excellent Coen Brother’s film, Miller’s Crossing. I read several reviews, even going so far as to read Roger Ebert’s pedestrian analysis. As to be expected, Ebert, who seemingly offers reviews from beyond the grave like a Dracula with press credentials, the piece was about him. Roger Ebert! : if he were Leo O’Bannon, as played by Albert Finney, crime boss, in his fine office, was the take.

Miller’s Crossing involves gangsters from several ethnic backgrounds, a melting pot of crime; Irish, Italian and Jewish, maneuvering for control in a prohibition era medium size and unnamed city. The central character is a fedora wearing eminence grise to the Irish crime/political boss, Leo. The fedora (my hook) is the standing metaphor for Tom Reagan’s (Gabriel Byrne) unstated ethical code; unstated and obscure even to the man himself. The fedora is blown by a breeze on a forrest floor that does not disturbs the leaves it rests on.The outstanding feature of the code is loyalty, loyalty above all else; a loyalty that makes Reagan a hostage to fortune.

A fortune to a degree controlled by the unseen presence of the bookie, Lazar, the only completely ethical character in the story. There is much talk of ethics by Italian mob boss and professional psychopath, Johnny Casper. His ethics concerned the integrity of fixed prize fights.

Ned Beaumont of Dashiell Hammett’s Glass Key and Tom Reagan may not be spiritual brothers, but they are certainly spiritual cousins. Beaumont and Reagan both work for political/crime bosses in an unnamed medium sized city. Both are gamblers on a losing streak.

Reagan soon comes to have much in common with Hammett’s Continental Op from Red Harvest, when Johnny Casper challenges Leo’s clear title as the city’s mob/political boss. The mayor and police chief in Leo’s pocket belong in his as he sees it. Casper aspires to have Reagan as his eminence grise.

Leo, however, is a true artist is a Thompson sub-machine gun, firing over 500 rounds from a 100 round magazine.

The drama begins as Leo breaks the rules by not allow Casper to kill (“for starters” growls Casper’s gunsel, The Dane, played with high brutal menace by F..E. Freeman) Bernie “the schmatte” Burnbalm, a master grifter ( John Turturro) Leo is taking long carriage rides in the park with Bernie’s fetching sister, Verna (Marcia Gay Hardin). Reagan betrays Leo with Verna, prompting Reagan to defect to the other side. Or, appear to.

An undercurrent of despair permeates the narrative. Reagan’s loyalty will never lead to happiness. But, he may pay off his gambling debts, which is a close second.

Barry Sonnenfeld’s cinematography not only adds to the drama of the story, but also provides beautiful images, in contrast to the the dark undercurrent. Carter Burwell has provided a music score that sings, Erin go Bragh.

Miller’s Crossing is a woodland intersection where the fates of Irish, Italian and Jewish mobsters meet, the place when business is settled and the final resting place of intentions, good, and bad.