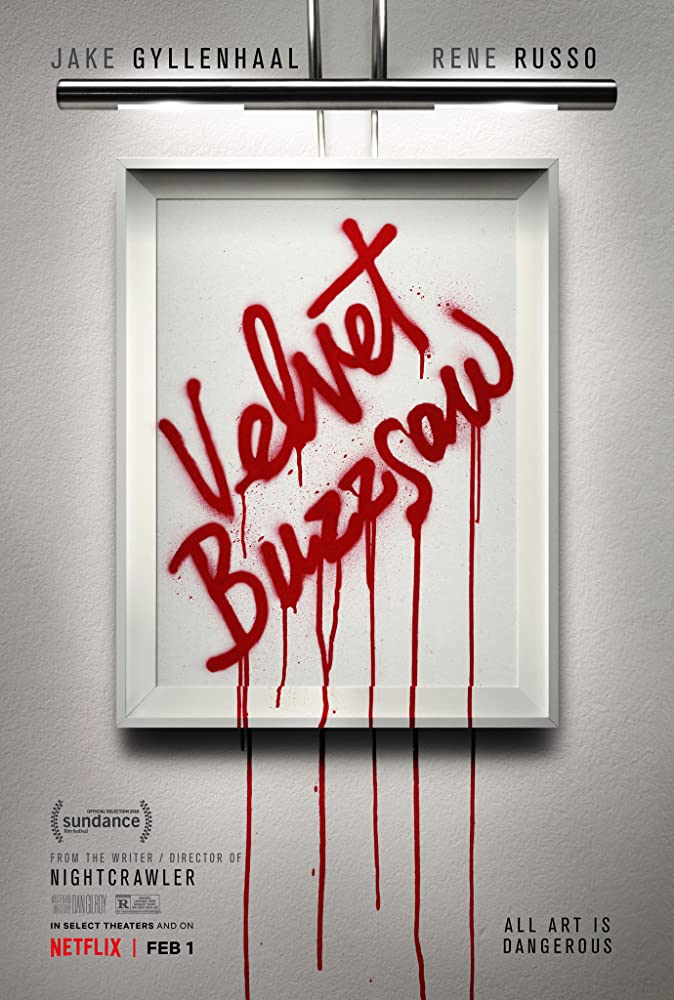 A satire set in the contemporary art world scene of Los Angeles, where big money artists and mega-collectors pay a high price when art collides with commerce.

When not engaged in auto-fellatio, one can imagine high brow, hoity-toity circles—art, fashion, and I shudder to think cinema is a third possibility—to instead partake in a close alternative; self-fucking. Sure, many a casting couch allegation attests to the coercive Weinstein Way, but I speak of complementary players being in bed with one another for the advancement of mutual benefit. The latter is what one art critic, Morf Vandewalt (Jake Gyllenhaal), and gallery assistant Josephina (Zawe Ashton) exhibit inside the “supply chain” of the Los Angeles fine arts scene when they start an opportune fling. Presented as spontaneous, and, with hindsight, incidental to the plot, their affair arrives with the scorched earth invective of a military offensive from director Dan Gilroy, his first of numerous such comic assaults.

The film is a decidedly satirical turn from Gilroy this time, more so than Nightcrawler, and its take on a snobbish milieu is a sweeping, take-no-prisoners critique. Whereas he trained his muzzle on the news networks as a whole in his previous movie, the targets of his scorn were embodied in an intimate setting of two characters. Rene Russo returns as Rhodora Haze, owner of a gallery bearing her name, with second billing on top, but with a slew of characters in tow for Gilroy to vilify. The minimalist framework is now an ensemble crew of critics, artists, gallery owners, interns, and brokers and all the politics that twines their materialistic pursuits and, well, limbs and torsos.

John Malkovich and Toni Collette feature as Piers and Gretchen, respectively, a revered painter and former headliner at Rhodora’s, and a freelance dealer. This community of gatekeepers are a wordy bunch, and resort to charged expressions reserved for erotica when discussing their wares to imbue meaning and grandiosity. Descriptives like ‘ravishing’ and ‘mesmeric’, in truth, are a subterfuge preserving commercial interests at heart, and would not be out of place on the pages of a tantric guide. In short, precise innuendo. But all is presented in jest.

The dramatic thread follows the posthumous discovery of a hobbyist painter’s portfolio as it becomes an instant hit, first with appraisers then the public. Vetril Dease. The art is so potent and profound it reverberates to life with the venom of its maker’s troubled past still coursing in the brushstrokes. This catalog, an abounding find, is a treasure trove ordered destroyed as a dying wish by its creator. What ensues is a mad dash to claim rights to the abandoned bounty and control the supply to inflate its value. Meanwhile everyone has effectively sold their soul to a dead devil at a bargain and without a receipt. There is a side plot that delves into Dease’s past not unlike the legend of a horror villain’s origin which I will not expound on for brevity and spoilers.

Addendum: “A Six Degrees of” was something that crossed my mind while watching Velvet Buzzsaw. Ever since End of Watch, Jake-G has been on something of a roll, with minor bumps to be expected during that span. Here, his character has a Warholian resonance and amalgamation, if not relevance; in the movie, he is not gay, bi, or fluid… just “confused,” as Josephina accuses. Apart from starring alongside Russo in her husband’s debut, Nightcrawler, Jake Gyllenhaal, Amy Adam an Zawe Ashton all feature in Ford’s Nocturnal Animals. Amy Adam’s character runs an art studio but the highlight of this “soft revenge” movie was Ford’s meta-textual treatment of past, present, fiction and the projected visions of the written word. The Neon Demon is an interesting antithesis—and a companion piece—to Velvet Buzzsaw, if one liked their actors inanimate and mannequin-like or liked Refn. That one was a takedown of both LA and the fashion scene. Toni Colette had a lead role in a divisive, recent movie (detailed here and here) known as Hereditary, whose supernatural tropes are spoofed here in today’s subject. That last one was a reach. Oh, and we miss Bill Paxton.