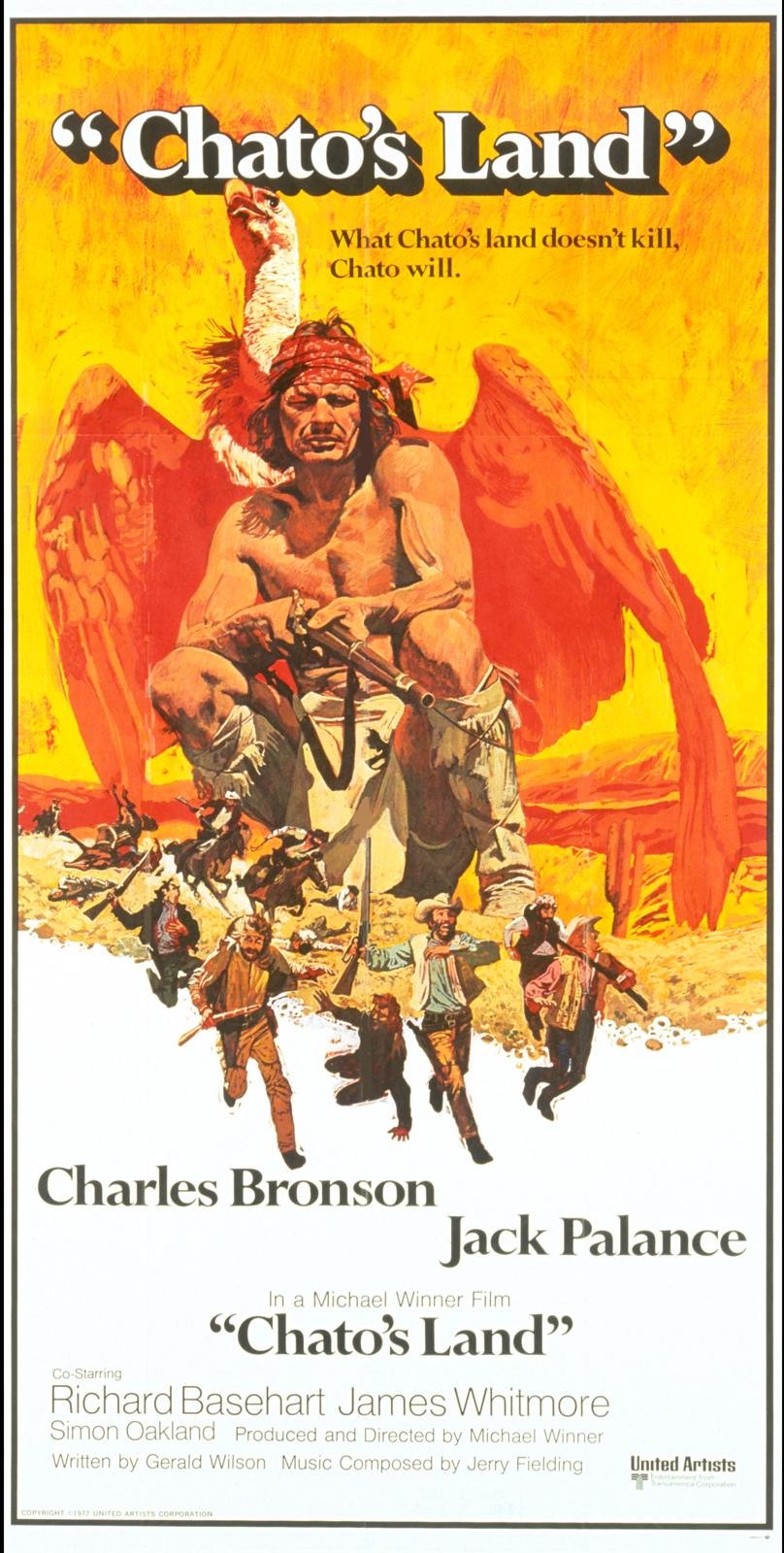 A posse of bigots tries to hunt down a half-breed who has just killed the sheriff.

Chato’s Land is not a happy movie or your usual Western. It is not a funny film, or one for viewers who cannot tolerate vile bigotry and brutal and explicit rape. However, it is a movie that showcases the laconic Charles Bronson at his most ripped and bad-assed best. If you thought the villains in the great film Hombre showed disdain for the wagon-burners, wait until you get a load of the crew that makes up the posse in Chato’s Land.

This Western gets off to a hot start as we see Pardon Chato (Bronson) at a saloon, merely asking to buy a shot of whiskey. Things get ugly in a hurry as the sheriff enters, tells Chato that “this is a white man’s saloon, that serves white man’s whiskey” and for him to get his ass out or be killed. The lawman draws, and Chato guns him down in self-defense.

A “breed” is a half white, half “injun”, and the lowest of humans according to the redneck bigots that inhabit this territory. A posse is formed to hunt down and hang this breed, no due process necessary for this “red nigger”. Chato’s Land is not your typical action packed Western. There is plenty of action, but the main focus is on the character development of the villains, the men who are poisoned by unbelievable hate and bigotry. As the movie progresses, it gets uglier; The hunters become the hunted, and turn against each other as the hatred reaches a crescendo.

Chato’s Land is not a movie for everyone, and parts of it are difficult to watch. The relentless bigotry of the worst of the posse, three unhinged brothers (Richard Jordan , Simon Oakland, and Ralph Waite) is shocking. The brutal and graphic rape of Chato’s woman is especially cringe-worthy and Michael Winner probably lost a good portion of his audience with that scene. The cast of this movie is its greatest asset. As well as the aforementioned Hooker Brothers, we have the always brooding Charles Bronson, the iconic Jack Palance, William Watson, Richard Basehart, James Whitmore and Victor French.

The sheer number of great actors and their character development slows the film down quite a bit and for this reason many critics marked the film down. It is also a gritty, graphic and violent movie that is definitely not for the feint of heart. We cannot, however, ignore the splendid dialogue and plot development as the posse ventures deeper and deeper into Indian territory.

The acting and dialogue was superior with this cast, but as you might expect, Bronson and Palance were standouts. Jack Palance was Captain Quincey Whitmore, a Confederate veteran of a bitter War Between The States. Now Quincey certainly harbored a well-entrenched bigotry for all men of color, but he also had developed the wisdom of knowing when to pick his battles and when to admit defeat. Charles Bronson barely said a word the entire film. He didn’t have to as his mere presence and stealth amid the stark landscape spoke volumes for him. He was ripped, brooding, focused and struck his foes with a quiet and deadly intensity.

Chato’s Land was a slow-burn of a movie driven by relentless hate, bigotry and ultimately by the consummation of revenge. Chato was fired up enough by being disrespected, threatened and drawn on at the saloon. It must have been more than annoying to be stalked by a dozen of the worst bigots since the 1954 Convention of the KKK after schools were desegregated. He didn’t need much incentive to be fired up any more, but when this group of redneck cutthroats raped his woman and killed his family, you know there was going to be absolute Hell to pay. Chato’s methodology was brutally efficient, letting the land, its inhabitants (rattlesnake to the redneck face, anyone?), and the unforgiving environment do much of the work for him.

Like I said before, this movie is not for everyone. It is brutal, vile racism and bigotry is the order of the day, and there is a sickening and explicit rape scene. If you are a fan of the great Michael Winner, Charles Bronson and the Death Wish series, this movie is a must watch. Available FREE on YouTube.

7.5/10.0 With The Goatesian Rating Of Quite A Brutal And Racist Western