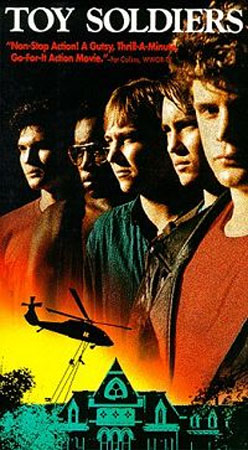 “Misfits. Underachievers. Rebels. The boys of The Regis School have been kicked out of the best prep schools in America. Terrorists just took over the campus. Now years of bad behavior are about to pay off.”

Are you fucking kidding me? This film is practically Tiger Beat writ large. And think about it — we have Sean Astin and Wil Wheaton aboard, two strapping young lads who came to prominence in Lord of the Rings and Star Trek. What teenage boy isn’t jerking off to this flesh feast? I would imagine that because of Astin, DVD sales for this long-forgotten film have skyrocketed in recent months. As for specific examples of male-on-male lust, there is that time Astin runs from the shower with only a towel, giving us several shots of ass cheek on the way. If your cock isn’t at full attention with that little nugget, consider the bonding experiences in the dorm rooms, where several young gentlemen plot to take back their school, all while lounging in their underwear. And when Wheaton is plugged by a terrorist, his death rattle is strikingly similar to a shattering orgasm. It makes sense when you understand that he was being cradled by Astin at the time. Standing above them all is Mr. Iron Eagle himself, Chocolate Thunder badass Lou Gossett Jr., a butt-kicking stud of a man who at one point crashes through a window with enough force to send any young man’s heart a-fluttering. And let me repeat — it’s a boy’s school! There are no women! The toy soldiers all but circle jerked for the camera.

At least a dozen, although none as fine as Wheaton’s ballet of death, a la Willem Dafoe in Platoon. But again, this is less an action movie than a soft-core romp through the bedrooms of the young and the masculine

I was laughing my ass off both times (ahem…) I saw it, which I strongly doubt was the desired reaction. Still, it always strikes me as silly that young punks are always able to outwit savvy, disciplined terrorist bands. The recycled plot is merely the same “hostages-are-taken-so-that-a-political-prisoner-can-be-freed” nonsense that seemed to hit the theaters every other week during the 1980s (and early 90s).

None that I can recall, although one dude says, “Um, guys? Can we change the subject? I’d like to go to bed without wetting my pants.” We all know he meant “creaming my jeans.”

The terrorist angle was a staple of the decade, much more than the cinema of the post-9/11 era. Interestingly enough, we did even less about it then, although to hear it discussed in right-wing circles, the lone bombing that killed Qadafi’s baby nearly finalized a Middle East peace accord. In fact, Reagan turned tail and ran after the Beirut Marine barracks bombing, an act that has been twisted into defiant bravery in subsequent years. As for the movie, the political subtext really goes no further than the 80s standard — young boys reach manhood when they kill lesser, browner human beings — although a few white faces are gunned down in the process. And there’s a Boys’ Town message here that would please Newt Gingrich. Even bad boys — especially bad, bad, wicked boys in need of a good spanking — can be brought into the fold if we allow them to exact bloody revenge.