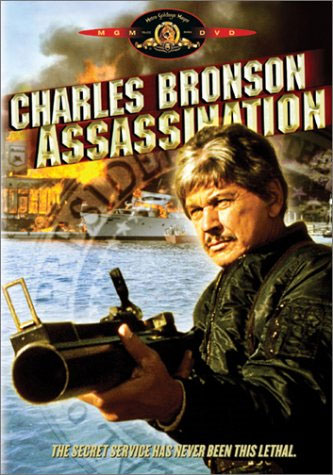 “The Secret Service Has Never Been This Lethal.”

We all know that Charles Bronson is one of the most heterosexual human beings in the history of the cinema and this planet, so overtly gay scenes are few and far between. He might take off his shirt now and again, but he’s so old and saggy that what we’re seeing isn’t the sheen of baby oil, but awkwardly applied Ben-Gay. He seems to avoid women, but that might be due to a withered member rather than a preference for male-ass adventures. Here, a hot young Asian chick named Charlie pressures him to give up the sausage, but he refuses for most of the film. Consider this early exchange:

Asian Chick: “Are those pants going on or coming off?”

But as solidly indifferent as he first appears, he finally relents. “You’re place or mine?”, he shrugs, as if it’s better to shut the broad up than continue playing games. There are big guns that are clearly cock substitutes, but this stands as one of the least homoerotic films of the 1980s. Women are largely discounted as bitches and pains in the ass, but I’ll be damned if I saw any skin at all, let alone a chiseled back or washboard stomach.

After a slow start, nine lives ended with great force, including several that were shot in the face at point blank range. Unfortunately, everyone who died was either a hitman or a slimeball, so no pleasure could be extracted from watching civilians get blasted merely for being in the wrong place at the wrong time.

Folks, I love Charles Bronson. His films are garbage, but he usually makes me smile with little effort. Sadly, Assassination is arguably the worst film of his career; it’s certainly the most poorly acted. Jan Gan Boyd (as Charlie) reads lines like she just learned English the previous evening, and her wooden delivery is so painful to endure that I nearly stopped the movie and made a dash for the steel wool. The inept, chicken-scratch script surely didn’t help matters, especially when we’re treated to lines like this nugget from “One Mama” (the First Lady) Jill Ireland, after she’s roughed up by Bronson (who is her bodyguard): “I wouldn’t miss the Inauguration if my eye turned red, white, and blue.” And to think that the director of this fiasco once helmed On Her Majesty’s Secret Service! Moreover, the stock footage of the Inauguration is clearly Reagan’s, and the head of the Secret Service has sinus problems for no reasons that are visibly relevant. About the time a cyclist tore from an exploding barn without a scratch, I was completely fed up. Still, had I packed up early, I would have missed Bronson emerge from a lake more perfectly coiffed than Michael Caine’s infamous drip-dry event in Jaws: The Revenge.

Nothing so clever as that, but groaners as far as the eye can see:

Bronson: “Charlie! Get some clothes on!”

Asian Chick: “That’s not what you said last night!”

Asian Chick: “Why don’t you move in permanently?”

Bronson: “I don’t want to die from a terminal orgasm.”

Asian Chick (to Bronson): “Are your salmon swimming upstream?”

For a Golan/Globus enterprise, this has very little right-wing fodder, although the villain is a Senator from Hawaii, arguably America’s most Democratic state. Speaking of the bad guy, he wants the First Lady dead because he knows that she’s prepared to divorce the President because he’s impotent. A divorce would kill his re-election chances and the Senator wants to make sure he remains the President’s right-hand man. Quite reasonably, the Senator enlists the aid of Libyan terrorists to murder the First Lady so that, as a widower, the President sweeps his way into a second term. Oh, and the assassination attempts literally begin during the Inaugural parade. I’m not sure how political that is, but it’s pretty goddamn stupid. Other than that, there is the angle that those who support the ERA and women’s rights are cunts and rug-munching man-haters, but that’s a sentiment that transcends the Reagan years. Last of all, there’s a used car lot named Indian Joe’s, where the loudspeakers play war cries and assorted stereotypical chants. Clearly racist, it belongs as an 80s Action staple.

A truck on the train tracks barely avoids a head-on collision, and is forced down a hill, where it lands upside down in shallow water. A few moments pass, and for no reason, the truck explodes with the force of Fat Man and Little Boy. And when the evil Senator is caught, he makes a run for it, only to be pushed through the glass window of an elevator, where he plummets several dozen stories to his death. Hardly novel, but pretty righteous.

Bronson and Ireland sure as hell ain’t Astaire and Rogers.