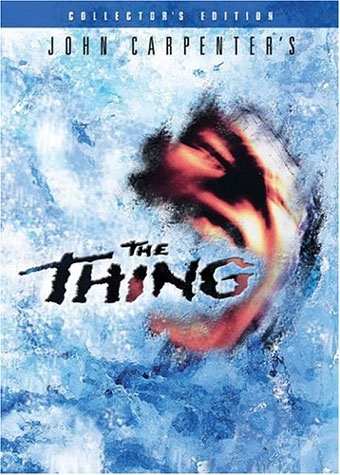 Man is The Warmest Place to Hide.

Besides the Tagline, none, especially when you consider the fact that you have twelve men living together several thousand miles from the nearest woman. This is sort of understandable, because with the exception of Russell and Keith David, the most attractive man in the base is Wilford Brimley.

Counting the five dogs that get it, 17 deaths happen on screen. Which is very low. However, when you realize that out of twelve characters, ten die, the Corpse Count Percentage is through the roof! Even higher when you factor in the two Norwegians who get killed. So, out of fourteen humans, two live, giving us a kill rate of 86%, Not too shabby. Factoring in the dogs, that figure rises to 89%. Plus, only two people die by the gun. Everyone else is either burned to death, or eaten by an alien. Awesome.

Not bad whatsoever in any way, shape or form. Twenty-three-years on, it still holds up as one of the creepiest and most involving alien/action/horror/snow movies ever made. In fact, I had my doubts about putting it in the Ruthless Guide to 80s Action at all. It is basically here only because when they take the alien corpses outside to burn them, they douse them with gasoline and then hit them with a flamethrower! Just dropping a match would be pretentious, cinema verite shit. Seriously, the almost constant use of flamethrowers is the equivalent of Peckinpah’s double blood pack philosophy. Plus I feel that Carpenter would want to be included in the Guide rather than get some fancy-pants “normal” review.

It’s always stunning to me just how good John Carpenter was in the 80s. Not even counting this film, he had Escape From New York, Big Trouble in Little China and of course the great They Live. All these films can not only fit into our Action Guide, but stand up as good films on their own. Quite a feat. Love it or beat off to it furiously every day (guilty!), even Commando is a bit silly once removed from the confines and protocols (and hot man-on-man loving) of 80s Action.

The Thing manages to be both creepy and funny, which is hard to do. Especially since the creepy parts were intended to be creepy and the funny parts meant to be funny. Plus, the general descent towards madness was very cool, with lots of guys just going crazy and accusing everyone else of being the alien. As much as I liked the creature effects (man… make up and stop motion was so cool!), I think The Thing would have worked even better with no aliens, or at least very few. The aliens in this film are shape-shifters, taking on the form of whatever life form they come in contact with. If they had gotten to Kurt Russell, then we would have Alien Kurt Russell (sweet zombie Jesus…) Anyhow, how cool would it have been if people just started wasting each other because they think everyone else is an alien? OK, fine, that basically happens anyhow. I’ll just shut up. Good movie. I need to mention that the Thing is a beautifully filmed movie. Carpenter’s best camera work. And when Blair (Brimley) goes apeshit with the axe, well, I’m still smiling.

Wow. So many to choose from. The dog getting attacked by the alien’s silly-string is pretty good, but the best has to be when Dr. Cooper is trying to resuscitate Norris with those electro-chest shocker things (you know, “clear!”) and Norris’s chest turns into a giant saber-toothed mouth and bites his arms off. That was fucking inspired.

To the untrained ear, it would seem that Kurt Russell gets all the good ones. He does, mostly, but, well, just hang on a minute. Some of the better Russell ones are when he’s playing computer chess (a stretch for him, I know) and loses, he dumps his whisky into the computer, muttering, “Cheatin’ bitch.” Also, when the Norwegians show up he yells, “Hey, Sweden!” And I bet you thought that the 80s Action inside joke that all Scandinavians look the same originated with Die Hard. Wrong. My favorite Russell one liner though, a Pre-Mortem one, is when just before he throws the stick of dynamite that not only kills the alien but blows the fuck out of the base is, “Yeah, fuck you too!” Ooh! Also, when Norris’s severed head grows spider legs and tries to sneak off, the stoner Palmer moans in resignation, “You’ve got to be fucking kidding.” The perfect line to say. None are classics, but they work well within the film.

However, the best One-Liner comes from Blair; he gets locked up in a tool shed because he destroyed all the computers and the helicopter (with an axe!). Russell and crew go to check on him. There is (conveniently) a little slot in the door. Russell peaks in and not only is Blair eating food from cans in an odd way, but he’s got a noose hanging from the ceiling. Blair states, “I’d like to come back inside now.” Fucking sublime.

None. Well, I’m sure Kurt Russell’s snow-sombrero is offensive to Mexicans in some way, but I’m just not sure how.

Pretty much. As mentioned above, Russell simply blows the fuck out of the base. Just before the alien killed almost everybody, they had been busy rigging the base with gasoline and dynamite. Man, it would almost be worth getting killed by an alien if you got to play with that much dynamite.

As he has displayed elsewhere, Kurt Russell can be a fucking joy to watch. More writers should hand Carpenter good scripts, because he really can shine from time to time. Like in the Firm, Wilford Brimley can almost steal the show with a minor part. Computers were funny things back in the early 80s. Especially the whisky drinking kind.