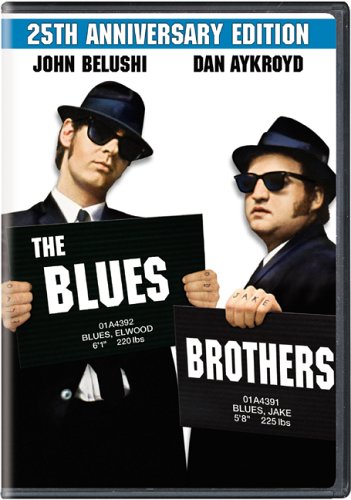 Tagline: They’ll never get caught. They are on a mission from God.

The Blues Brothers, starring Saturday Night Live legends Dan Aykroyd and John Belushi, is not the best movie ever made, but it may be the most fun to watch film ever released. I am reviewing the 25th Anniversary DVD Version which includes one disc. An Extended Version of the movie is on Side A, while Side B has the Theatrical Version. The Extended Version is 15 minutes longer than the Theatrical Version.

The Blues Brothers was no mere hybrid, but a kaleidoscope: a crazy mixture of a comedy, musical, action movie, urban documentary and love story that worked so well that it should be one of the all time favorites of anyone who loves cinema. The plot by Landis was simple: Jake is released from prison and reunited with his brother Elwood. After visiting the Orphanage where they were raised and learning of a looming tax lien, they visit a Baptist Church, experience redemption and inspiration to reform their band, raise the money to pay the taxes, and save the Orphanage.

During their quest, the felonies and sheet metal damages pile up as Jake and Elwood dodge the authorities, Illinois Nazis and a jilted lover. All of this occurs between numerous musical and dance numbers that are without peer. In addition to having killer music, this movie is also drop-dead hilarious in the spirit of another comedy classic, Animal House. How was it possible for two milquetoast white guys from SNL to bring The Blues alive? They did it, and boy how did they do it. 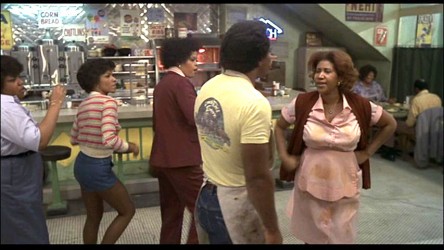 I cannot even think about doing a review of this movie without highlighting the greatest scene in the movie, if not one of the greatest performances in musical history. I have hereby turned in my Race Card and my Evil Atheist Conspiracy Card and will dance down the aisle to join the Triple Rock Baptist Church. The scene with The Penguin drove the simple plot, but the inspiration at the Triple Rock Baptist Church was just one of the greatest musical movie scenes ever.

The Church scene was unforgettable, but unbelievably not alone in its quality, as every musical number had a joyous life of its own. Seriously, as great as the entire movie was, no other scene matters in regards to putting this movie into its historical glory. I will challenge anyone to find a movie scene with more life, more vigor and joy, than the Road to Damascus revelation at that rocking ass Church. 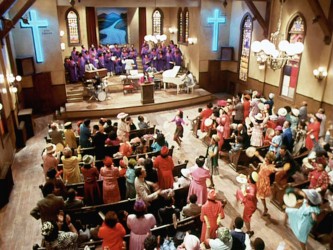 As an important aside, this movie was already an unlikely prospect, to say the least, but joining with the incredible talent of Aykroyd and Belushi, they settled for no less than the best musical soundtrack ever + the real deal as cameos and participants for their musical joy. How about James Brown, Aretha Franklin, Ray Charles, Cab Calloway, John Lee Hooker and Donald Duck Dunn for starters? The Band itself was comprised of Steve `The Colonel’ Cropper, Donald `Duck’ Dunn, Murphy Dunne, Willie Hall, Tom `Bones’ Malone, Lou `Blue Lou’ Marini, Matt `Guitar’ Murphy and `Mr. Fabulous’ himself, Alan Rubin, all there to back up the fabulous Blues Brothers and their quirky but lovable act. Yes, and the big guy himself, God. Like Young Frankenstein, The Blues Brothers had an outstanding supporting cast. 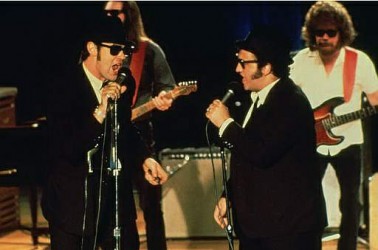 80s Action: Carrie Fisher was wonderful as the focused, nonplussed and mysterious woman who tried to turn The Blues Brothers into Commando II. Not only were there weapons and women who knew how to wield them, but there were car chases that were some of the best in movie history. I mean, a mall was totally demolished. Hundreds of Police Cars were destroyed. Millions of hut-huts were uttered. There were even cameos from Twiggy, Spielberg and Pee Wee Herman.What else could you possibly want? (Editor: How about Henry Gibson as the Head Nazi?) 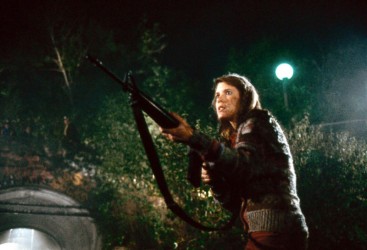 Musical Score: Unbeatable. Undeniable. Over the top and over the line, Smoky. Simply the best. The movie was one long celebration,and what about the participation of the locals in this totally rollicking good time of a movie treat? From “She Caught the Katy” and the theme from Peter Gunn and tributes to the two kinds of music, “Country” and “Western”, and ultimately to “Jailhouse Rock”, the music was toe-tapping and relentless. Sign here for The Blues Brothers: you will never regret giving yourself to this movie.

The 25th Anniversary Edition is a two-sided disc that contains both the original and extended versions of the film. “The Stories Behind the Making of The Blues Brothers” is an hour long documentary that is rich with insight on how this great musical/comedy came into being. There is a also a tribute to John Belushi and extensive production notes as well as a large still picture gallery. It is somewhat disappointing that there is no movie commentary with this DVD, but all in all the DVD Anniversary Edition is superior and a great value added package to the movie itself.