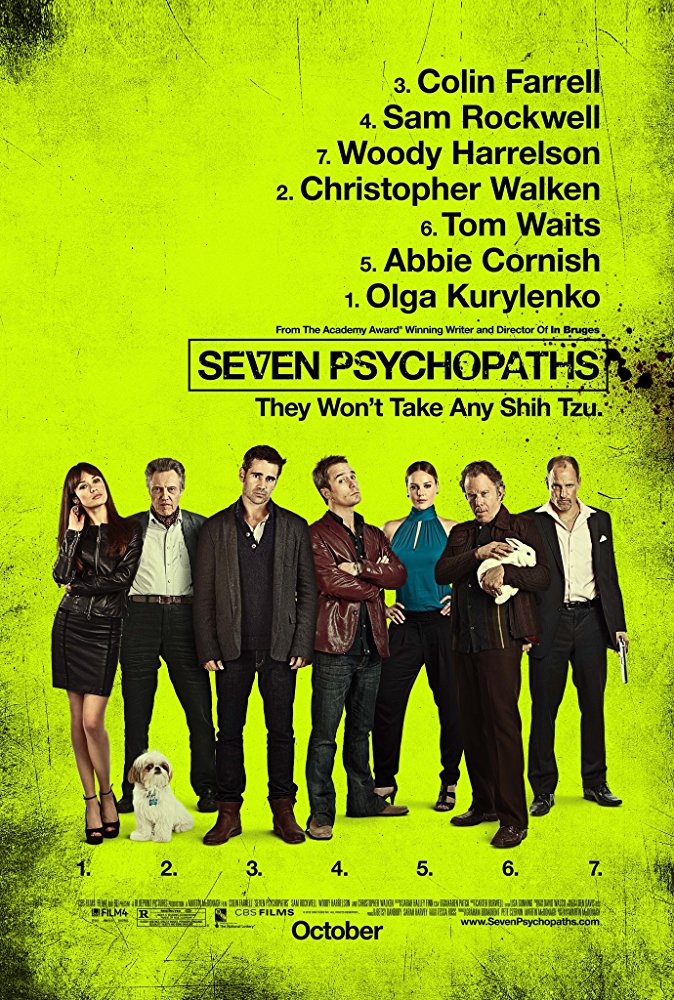 No, this is not Star Wars.

Two of the best movies that I’ve reviewed at Ruthless are In Bruges and Three Billboards Outside Ebbing, Missouri. Both movies were written and directed by Martin McDonagh, a very talented screen-writer and movie director. When I realized that this genius had another movie floating out there, I rushed to my amazon store and purchased a barely used copy of Seven Psychopaths. With a title like that, how can you go wrong? While not a masterpiece, Seven Psychopaths had its brilliant moments and like McDonagh’s other movies, there is no genre. This is a movie for movie lovers, and not for everyone.

The plot of Seven Psychopaths was as insane as was the load of great actors in this film. Marty (Colin Farrell) was an Irish writer who was struggling with alcoholism and writers block, while trying to write a screenplay called “Seven Psychopaths”. Billy Bickle (Sam Rockwell) was his best friend, whose occupation was dog-napping with his cohort Hans (Christopher Walken).

Unfortunately for everyone, one of the dogs that was kidnapped belonged to the vicious and violent crime boss named Charlie (Woody Harrelson). This time they kidnapped the wrong shih-ztu. In parallel pursuits, Marty tried to write his screenplay, and Charlie embarked on a bloody and relentless effort to get his precious dog back. What about the “Seven Psychopaths”? They were only superficial specters in this film, brought to life with disturbingly gory but hilarious flashbacks. There was one real life bunny-carrying psychopath, Zachariah (Tom Waits). Oh, and the Jack of Diamonds killer. More plot tidbits later.

Martin McDonagh delivered a film that was a blend of Tarantino, Guy Ritchie, and the most outrageous and violent Looney-Tunes cartoons ever created. As you might have expected, McDonagh gets the most out of his actors and with this group the acting was spectacular.

How about this cast?

Colin Farrell- Marty was a screenwriter with a great idea, but he had not gotten past the title. He also had problems with the bottle, which didn’t help his personal relationships either. Colin portrayed a sometimes brilliant, but often bewildered writer who was swept away by a huge problem created by this best buddy, Billy. You know the saying, “with friends like these, why do you need enemies?”. Marty was the voice of reason on this runaway freight train of a movie.

Sam Rockwell- Billy Bickle was just trying to help out his best friend who is struggling with his writing. Rockwell is a totally unique actor. He was outrageously believable in everything he did in this movie. I mean, who else would put an ad in the newspaper summoning genuine psychopaths to inspire Marty to write his script? Who else could actually get results from this outrageous ploy? You guessed it.

Christopher Walken- Holy shit, he was great in this movie. How is it possible for a caravat-wearing senior citizen with no physical presence at all to be so terrifying? Great acting skill is how. He showed absolutely no fear in this movie. When confronted with mob goons with shotguns, get a load of this exchange:

Paulo: Put your hands up!

Hans: Because I don’t want to.

Paulo: It doesn’t make any sense!

Hans was a character that was both infinitely versatile and immediately likeable. How is this possible for a dog kidnapper who wears an ascot? You have to see his performance to believe it. Other than The Deer Hunter, this was his best work. Even with all of the other great performances in this movie, he was conspicuously outstanding.

Tom Waits- Need a genuine psychopath who carries around a white bunny? Tom Waits as Zechariah is your guy. He, along with his black girlfriend were serial killers who hunted down and assassinated other serial killers. The flashback scenes of some of their handiwork were some of the most ruthless and violent that I have ever seen on the screen. He was so convincing that he immediately unblocked Marty and the words flew to the page. 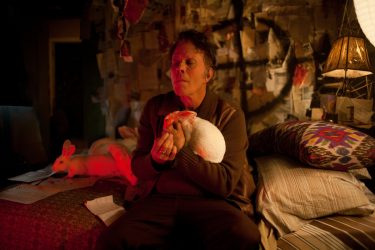 Woody Harrelson- I am hard pressed to recall any bad acting performance by Woody Harrelson, and this movie was no exception. He was a sadistic monster one moment and a goofy, sentimental oaf the other. He made the depravity of the character Charlie almost lovable and forgivable. I mean, he loved his dog more than his life…or the lives of anyone in the way of getting his pup back. Yet another brilliant performance from Harrelson.

Harry Dean Stanton- His character was only identified as Man in Hat. How about a film character who is on the screen maybe two minutes. How about one that never uttered a line, but stalked a hardened criminal so convincingly that the murderer ended up slitting his own throat? He did it just to end the image of that ghost of a man in that Amish hat. Chilling! 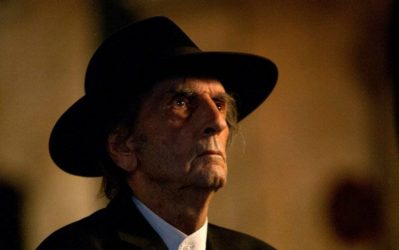 Like in his other movies, McDonagh has created a movie like none other. Seven Psychopaths was outrageously original and beautifully layered. The dialogue was to die for (see below) and McDonagh somehow made two low-life dog kidnappers dignified and lovable. This was a movie for cinephiles, but it did have its flaws. Those long periods of dialogue in the desert, as great as the dialogue was, were almost tedious at times, but no matter, I loved it.

This movie got favorable reviews, but was not to every reviewer’s taste. Rex Reed gave Seven Psychopaths a unbelievable 0/100 on Metacritic, (“Any cult it develops will be chewing gum and wearing Halloween costumes” -Rex Reed), but I suspect that was because of Hans’s hilarious reference to fags and homos. This frustrated Queen gave mother! a horrible review (Worst movie of the century he said) as well. Martin McDonagh is not one to let political correctness get in the way of his craft though, is he? I haven’t even mentioned the Buddhist burning monk connection to this movie. Maybe the director tried to do too much in this movie, but it is no matter. Even a marginal effort (if there is such a thing) from this director is light-years ahead of most. I loved it.

Quotes and One-Liners [The cup runneth over!]: