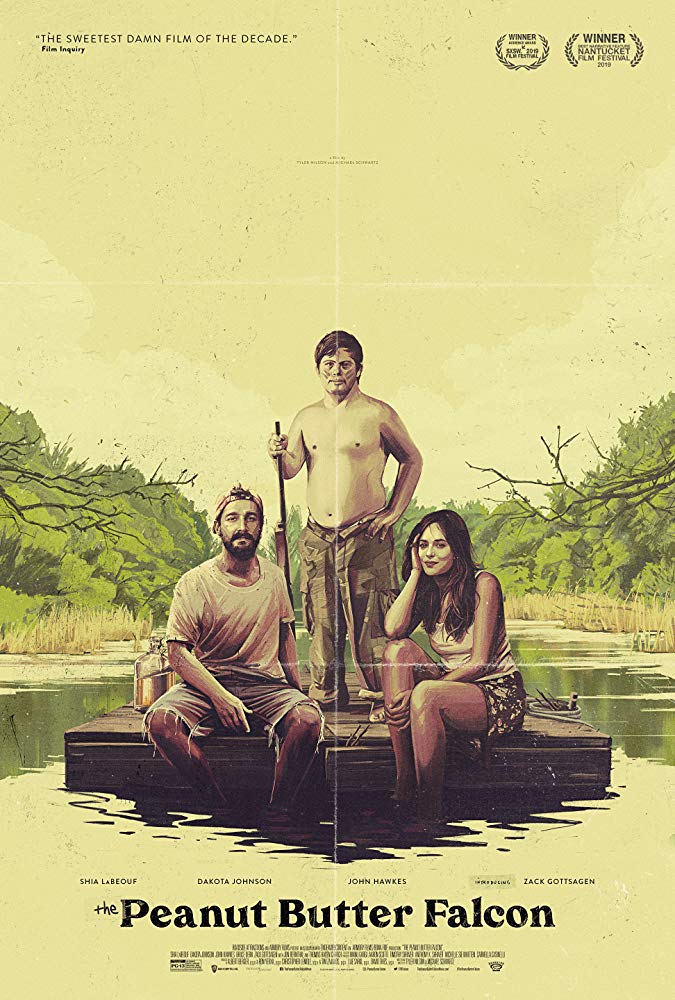 First, I would like to offer a sincere apology to Matt Cale for suggesting that he watch this movie, much less like it. In fact, if I ever had any reason to Clockwork Orange Matt Cale, this would be the movie. However, movie critics are tripping all over each other to gush over this derivative film. Fine, gush over it, but only at the danger of diabetes.

The Peanut Butter Falcon is Cuckoo’s Nest meets Huckleberry Finn while traveling to Jefftowne. Oh, and you have a barely breathing Bruce Dern + a romantic interest as well. Plus, there are Rednecks, a lot of Rednecks, and in all their stereotypical glory. To say that this screenplay was written by a 6 week old fuzzy kitten is to do a disservice to fuzzy kittens. “It’s just a sweet story”, one nameless reviewer coos. So, without further ado, let’s get into the review.

Spoilers Be Damned! (This is too good not to share immediately)

Here is the plot. Zak was stuck in a nursing home, but he had a dream. He wanted to be trained to be a ‘rassler by The Saltwater Redneck. So, with the help of Carl, he broke out of the nursing home, wearing only his undies. He stowed away on Redneck #1’s boat, who was running away from Redneck #2 because of fire. They bonded. Elanor hunted for Zak and found him in a drunken orgy with Redneck #1. They all eventually bonded and floated down the river on a raft, looking for The Saltwater Redneck. Redneck #2 found them, but Zak saved the day (what else!)

It’s ‘rasslin time. It’s The Peanut Butter Falcon time, who Redneck #3 and Redneck #1 have now convinced is a good ‘rassler. But…OH NOSE…PBF has to ‘rassle Jake The Snake Roberts! (villain #2), who does not like newcomers or Downies. What could possibly go wrong? This is the end of the Spoilers. If you want to see what happens, you’ll just have to suffer through this mess like I did.

Oh, and this guy is in the movie as well. Thank Goat for tiny cameos. The Peanut Butter Falcon is not quite as soul-crushing as Radio, but it is close.