Network: A Look At A Classic 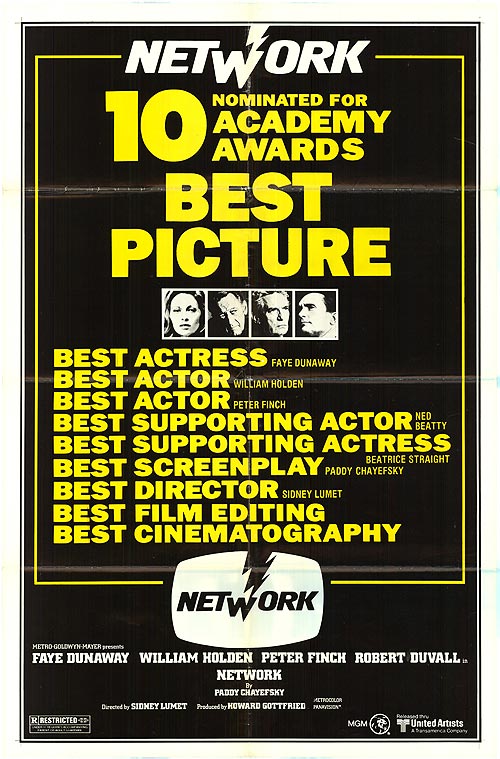 We are mad as Hell, and not going to take it anymore

Network is certainly not the greatest movie ever made, and I would never argue that it achieves any lasting impact as a work of art. Its style is flat (like most television programs, appropriately enough), and you’ll hardly remember any of the visuals. Still, it remains my favorite films because I don’t believe a better script has ever been penned. Network is, of course, nothing but a series of monologues all either yelled, screamed, or bellowed — but the words themselves capture every dimension of the human experience, from the fear of death to the “corrupt comedy” of modern life.

Some have argued that despite the prescience of the film (it certainly predicts the rise of tabloid television), it is a dated curiosity that no longer holds any relevance. But more — much more — is at work here than a bombastic satire of the decay of television programming. At bottom, Network is the angry, uncompromising blast against the decline of the individual. In the face of corporate hegemony and the commodification of everything from abstract ideas (freedom, justice, rebellion) to human sexuality, the vibrant, vital, dangerous lone man in the wilderness is nearing extinction, if he hasn’t already met his end.

And while some have also snickered at the hyperbolic, almost operatic style of acting on display, I would put this cast against any other in film history. Peter Finch gets most of the attention (and won Best Actor), but my money is on the “lesser” characters, including William Holden, Ned Beatty, and Robert Duvall. And of course, Faye Dunaway burns most of her fellow cast members alive with the portrait of female ambition. Is it misogynistic to suggest that in order for a woman to become a corporate player she must reduce sex to a clinical act (when it performed at all), borrow, if not permanently adopt, a set of balls, and banish the mere hint of humanity unless it serves a higher, more “profitable” goal? Perhaps, but also true, my friends.

If Dunaway’s Diana is anything, it is a 1970s version of Condi Rice — brilliant, focused, successful, while also lacking all interests unrelated to work and, frankly, a functioning vagina. And yes, we perfectly understand why Holden’s Max falls for such a woman, even though his own fierce intelligence can assess the inevitable doom. Network reveals the terrible secret about most men, in that they crave power and influence while simultaneously longing to be humiliated, brutalized, and reduced to tatters. If you don’t believe me, check the roster of those who are big S&M freaks. To a man, they are CEOs, Wall Street types, and baton-wielding cops. And the occasional critic for movie websites.

Screenwriter Paddy Chayefsky (The Hospital) shoots high, low, and with a manic intensity, which makes for a wild ride of pointed social commentary. He not only fears for mankind in a dehumanized age, but eviscerates American credulity, the decline of empire, cynical opportunism in the counterculture, youth posturing, and the very idea that we could ever inhabit a true democracy. “We no longer live a world of nations and ideologies,” Beatty’s terrifyingly real corporate chieftain shouts. “There is only ITT, AT&T, Dow, and Union Carbide; these are the nations of the world today.” His “the world is a business, Mr. Beale, and has been since man crawled out of the slime,” is the most depressing statement ever uttered in a film, largely because, despite our resisting such a notion, it is unavoidably, irrefutably true.

It is telling that Beale’s “Angry Prophet of the Airwaves” is immensely popular once he invites viewers to channel their rage at something (or someone), only to be ignored and eventually murdered when he strikes a more somber, powerless note. The conclusion, therefore, is obvious to all truth, real, hard-nosed truth, will get you killed. Or at the very least kicked off the air.

Again, as a film that could be read in book form without losing much of its power, it is fair to argue that cinema should avoid the “talky” in favor of more conventional cinematic presentations of drama. And yes, nothing on display here is very subtle, nor does it achieve high poetry. Characters are articulate to be sure, but we are not left in the dark as to their intended meaning. The dialogue is fun, playful, and coarse, but admittedly sanctimonious, while often adopting the tone of a stern (but much-needed) lecture. But I’m fine with all that, largely because I agree with the film’s pessimistic worldview, but also because the characters — larger than life and pissing with rage — work as living, breathing people and as symbols of large societal issues, which allows them to avoid caricature. After all, we are bought and sold automatons; spinning and whirling with the self-deception of those still clinging to the values inculcated at birth. We long ago ceased to be a free people, yet never rest in our fanatical need to spread around the world that which we lack at home.

And what is “free,” after all? Network doesn’t give any clues, but it sure as hell knows what it isn’t. The packaged rage of Howard Beale is not, contrary to what many have taken from the film, a genuine call to arms. Instead, it is Chayefsky’s way of saying how easily we are led to slaughter by assorted charlatans, especially those with the assumed credibility of being on television. If he has his own show, we argue, maybe there’s something to what he says. But Beale is a nut, and we are even nuttier for taking his words as gospel. The famous “mad as hell” scene where people open their windows and yell is, again, not an endorsement by Chayefsky, but rather the portrayal of a pathetic stab at legitimacy by a people who long ago lost the ability to change their surroundings. Slogans and catch phrases, in sum, have come to substitute for action. It’s no different than George W. Bush talking about his administration’s environmental “accomplishments” while producing nothing of substance to back up such claims. Still, the claim is all most people need and with our self-imposed busy lives, we accept the illusion and move on. It’s what Daniel Boorstin called the “pseudo-event,” where the public acts as if (or genuinely believes) they can’t see the strings.

Network, then, is an apocalyptic work, full of a snarling wit, but content with the end of the road. We’ve done our best, it seems, and still we are a silly, adulterous, dishonest, superstitious people. Any efforts to improve our lot (or the lot of others) are met with suspicion, scorn, and the disapproving gaze of industry’s kings. Howard Beale wasn’t the only one shot for bad ratings; all men are similarly targeted as they fail to measure up. And of course, we’ll always have our Howard Beales, and as quickly as they rise to verbalize our hopes and fears, they will be destroyed by the same impulse that gave them their initial prominence. So long as man needs a savior, then, he will be lost.