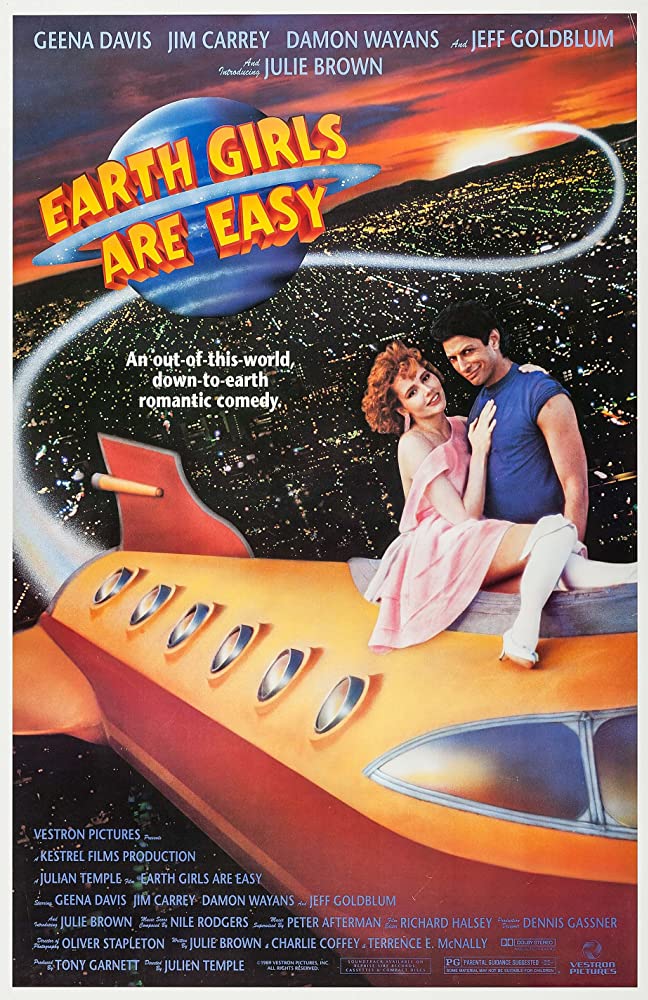 Aliens and Furries in SoCal

A few years after enacting a disgustingly doomed romance in The Fly, real-life husband-and-wife Jeff Goldblum and Geena Davis went on to play a similarly weird but much less doomed couple in Julien Temple’s 1988 cult classic Earth Girls Are Easy. Unlike The Fly, which was dark and deep enough to warrant speculation about its hidden subtext even at the time of its release, Earth Girls is not the type of movie that generally gets a lot of heavy scholarly analysis, but it is not very hard to see that, for all its sci-fi kitsch weirdness and sex-comedy misunderstandings, Earth Girls is full of clever subtext about the not-so-good but definitely old-fashioned fear of interracial coupling. Oh, yeah, and also bestiality.

Let’s get into that second one first. Much like Asian stereotypes (Sixteen Candles, The Goonies, Gremlins), bestiality was a weirdly prevalent theme in a lot of popular 80s movies, such as The Howling, Howard the Duck, Splash, and Silver Bullet, which features a bizarre woman-werewolf tryst, though the sexual nature of it is even more apparent in Cycle of the Werewolf, the novella which inspired the movie. In a way, it can all be traced back to King Kong, which got a big, star-studded remake in 1976, right around the same time a few other notable films (Dirty Harry, Death Wish, First Blood) were paving the way for the vigilante and one-man army tropes in 80s Action cinema.

Earth Girls is especially interesting, though, in the way it explores bestiality as just one facet of a sexual fetishization of the Other. It’s right there in the title: the aliens of the film are following their space-boners to a completely foreign world, with no reservations whatsoever. The red alien, Wiploc (Jim Carrey), gives voice to their reason for visiting Earth: “I want a woman!” Lest there be any doubt, this is a sex comedy, right from the start. But as a sex comedy involving intercourse between furry alien beings and ordinary Earth women, it requires no stretch of the imagination to see it as a bestiality comedy.

The Other, as repeatedly referenced herein, can be applied to a lot of things, nearly all of which are present in Earth Girls. The traditional and most immediately apparent interpretation of the alien invasion movie is as a metaphor for xenophobia, which was certainly a major concern in Reagan’s America. Actually, though, what Earth Girls presents throughout its running time is something of a reverse xenophobia in its characters’ sexual attractions to the Other, something that is known, simply enough, as “xenophilia.” This is, for example, the still extremely common “Asian persuasion” that so many white guys in America profess to have, a fetishization of women from another culture that they see not as racist in its own perverse way, but merely a harmless sexual preference.

Xenophilia is all over Earth Girls Are Easy. The aliens, of course, are the main representation of the Other in the film; one of them, Zeebo (Damon Wayans), is even, as he himself says in Candy’s voice after they are shaved and therefore made to look human, “totally black!” And human women (sorry, Earth girls) are the same exciting Other to the aliens. Wiploc, for example, drools over “Finland babes,” which, as he’s learned from TV, is what any blonde woman is called.

However, the dominant perspective of the movie is, obviously, an Earth-based, human one, so let’s focus on the aliens and how they come to represent foreign cultures and races, as well as the generally shabby way those cultures and races are treated in America, especially when we fear they might be coming for “our” women.

When Valerie’s fiancee, Ted, aka “Dr. Dude” (Charles Rocket), finds the three aliens crashing at the house he and Valerie shared before she kicked him out for attempting to cheat on her, he tells her, “You have no business being with people like that! These guys are too weird, Val.” In other words, when Ted cheats with a blonde nurse in their shared home, that’s one thing, but for Val to suddenly shack up with a bunch of alien weirdos, one of whom is even “totally black,” well, that’s obviously out of bounds.

Mac (Goldblum) shows why he’s the leader of the little alien explorer party when he uses his Otherness to get into Val’s pants. “What is sex?” he asks. Valerie replies, “When a man and woman like each other, they take off their clothes,” and before she can elaborate further, Mac says, “Okay,” and immediately begins to disrobe. Smooth, Mac. Smooth.

Valerie is, at first, worried that they might not be anatomically correct for each other because “you’re an alien and I’m from the Valley,” but before long, she succumbs to Mac’s “love touch” and we get to the first and only full-on alien-human sex scene in the movie. Valerie’s anxiety about this social transgression manifests in a surreal nightmare in which everyone in the Valley has become an alien. Her inter-species coupling has literally ruined the neighborhood. When she awakes, she takes five extra birth control pills, demonstrating two things: Valerie is terrified of the idea of having a mixed “race” baby, and she has no idea how birth control pills work.

Much like Alien preyed on other sexual fears, Earth Girls Are Easy slyly taps into the sort of Cold War paranoia and xenophobia so prevalent in Reagan’s America, the time of its release, as well as 1950s America, when the sci-fi films by which it is so clearly influenced were released, films like Invasion of the Body Snatchers and The Day the Earth Stood Still in particular. Earth Girls is a loving spoof of these paranoid classics, but with a much more modern, progressive take on sexual politics at its core, rather than the anti-communist paranoia and other societal factors inherent to those films.

Though it has a lot of fun with the metaphor, the heart of Earth Girls Are Easy is clearly in the right place. Near the end, when Ted discovers that Valerie has slept with an alien, he is horrified (“You’ve been contaminated!”), and this bigotry seems to be a major reason she decides to leave him in the empty swimming pool with her cat, which he always hated until Mac puts the “love touch” on him.

And we find ourselves back at bestiality again, because Dr. Dude is definitely balls-deep in that poor cat the second the credits start rolling.