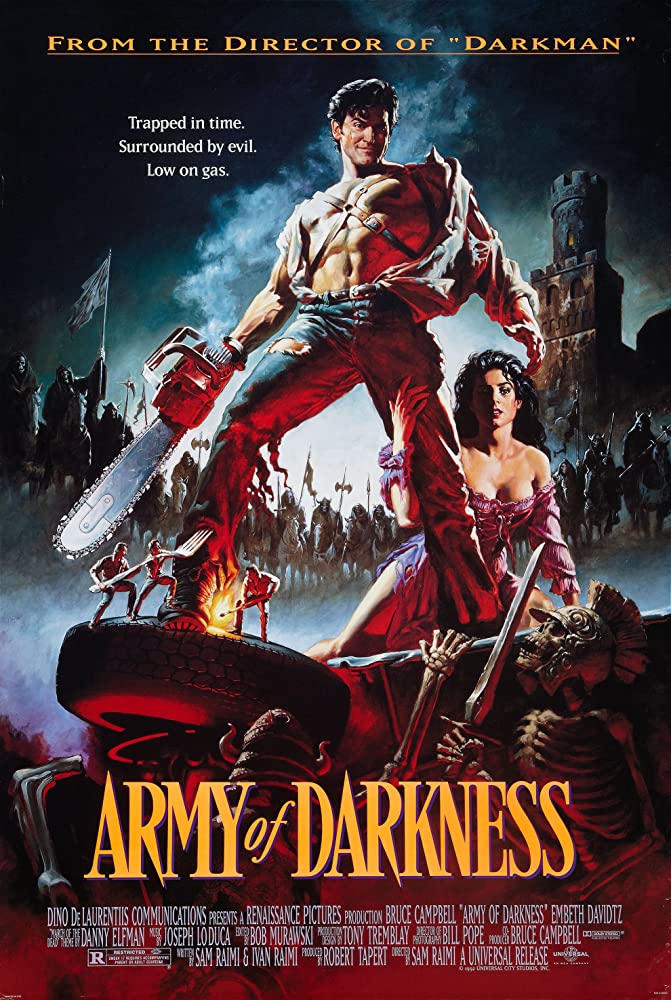 Ash is back in time to go medieval on an army of deadites.

One hour 21 minutes, R for copious fountains of blood

Fair Value of Army of Darkness: $20.00. If you asked me to name a film that was the perfect embodiment of the charm of midnight movies, it would be Army of Darkness. Perfectly fun, endlessly quotable, and never dull. More cheesy goodness than a Wisconsin casserole.

Listen Up You Primitive Screwheads! With Army of Darkness, Raimi and Campbell ironed out all of the flaws of the earlier films, jettisoning the horror in favor of Yankee in King Arthur’s Court style fantasy. It’s a spiritual sequel to Monty Python’s Holy Grail and Return of the Living Dead at the same time. That ‘renaissance faire’ attitude displaces the audience onto a raft of suspended disbelief- from the first hokey shot of a cardboard model castle, we know we’re dealing with pure fantasy.

Plot Summary: Ash is back in time to go medieval on an army of deadites.

Nothing but 8th Grader: A synopsis of the windmill scene will explain what makes this film work: Ash runs into a windmill. There, he sees a mirror, and he breaks the mirror. A horde of tiny evil Ashes scurry out from the broken shards of the mirror. They ambush and tie Ash up, Gulliver & Lilliput style. One of the evil mini-Ashes jumps into Ash’s mouth. Ash then drinks boiling water to kill it.

It’s pure Kindergarten “AND THEN HE” storytelling. And it’s that kind of lazy-afternoon with your friends energy that saturates the film and makes Army of Darkness satisfying on a primal level.

Skeleton Reaction Shots: There’s a lot of close-up shots of plastic skeletons ostensibly reacting to catapults, gunpowder arrows, or just the latest sweet combat move that Ash is pulling. That peanut gallery of plastic is a part of the formula: Army of Darkness is at once a cheap renaissance faire and a haunted house at Halloween, the perfect ideal of the kind of costumed chaos that those events are supposed to be.

The sets are cheap, the makeup is on the level of an episode of Xena: Warrior Princess, there’s only the tiniest thread of continuity and logic. But the pure commitment of the cast and the cinematography to chewing every line of dialogue, to placing ever shot and take into the most over-the-top, is what makes films like this and Robert Rodriguez’s films (a comparable auteur) work.

Chins can kill, as can boomsticks: And the other part of this is Bruce Campbell’s physical comedy, easily on the level of Rowan Atkinson or Buster Keaton. Here, he gets a double billing: both as Ash and as Evil Ash, protagonist and antagonist at once. The heroic Ash is hyper-masculinized to a level of Matrix from Commando- nothing but one liners; the evil un-dead Ash is all snarls and threats. Both have a wide-eyed manic intensity. It’s a career high act.

Hail to the King, Baby!: This is what Evil Dead and Evil Dead 2 were trying to be. It’s an eighty minute cartoon that never stops being fun. It stands alongside Hausu and Dead Alive as unvarnished grand guignol pleasure.