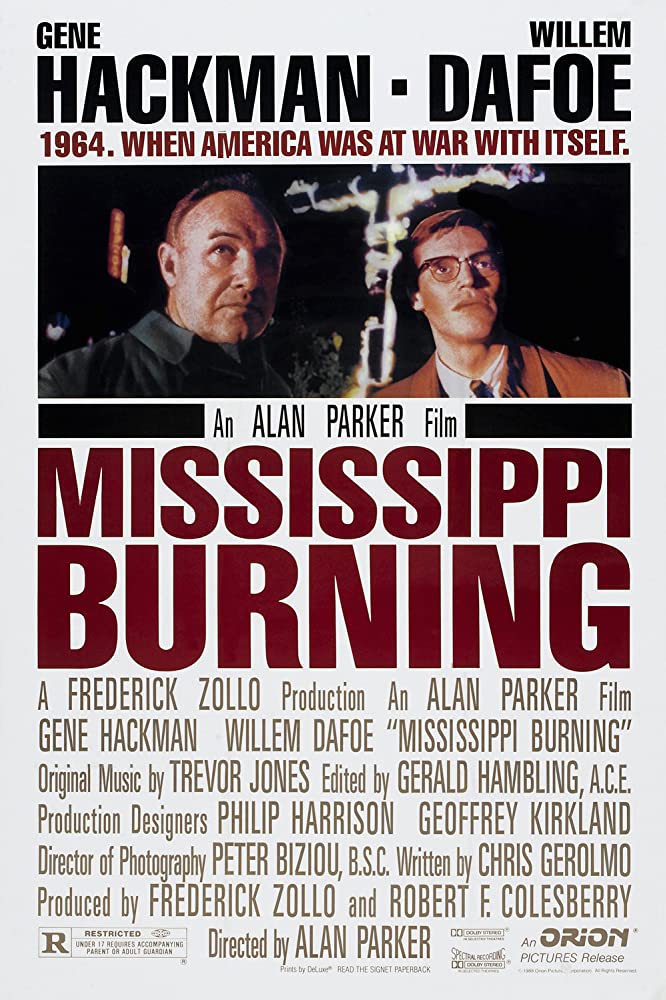 Two FBI agents visit Mississippi to investigate the disappearance and murder of 3 civil rights workers. They find the very scum of the earth.

After reviewing 3 of the funniest movies ever made, I thought I would review a movie about ancient history. Yeah, I wish; Things may be better, but the racism is alive and well in this country. Mississippi Burning is about as far from humor as you get, especially for people of color who had the misfortune of living in probably the most sickeningly racist state in the nation, The Magnolia State of Mississippi.

Mississippi Burning was based on the actual events starting May 1964 when 3 civil rights activists were missing after they were arrested and released in Neshoba Co. Mississippi. They were working with the Freedom Summer campaign which was attempting to register African Americans to vote. The movie vividly portrayed the events that happened when the FBI arrived in force to investigate what had become the brutal murders of Chaney, Goodman and Schwerner, whose bodies were later found in a nearby swamp. These murders and the national outrage helped President Lyndon Johnson get the Civil Rights Act of 1964 passed.

This movie is headed up by a magnificent cast, as both the good guys and bad guys are starkly convincing in their roles. The two FBI agents, Anderson (Gene Hackman) and Ward (Willem DaFoe) differ greatly in their philosophy and methodology of law enforcement, but both share the white-hot passion for justice. Anderson has walked the walk as a native of Mississippi and was once a County Sheriff near Memphis. Ward is a by the book liberal who thinks that “some things are worth dying for”. Anderson, who knows the Mississippi ropes, replies that “people down here think that some things are worth killing for”. We see plenty of the latter with beatings, lynchings, brutal intimidation, burning of churches, all courtesy of a well-entrenched KKK.

As you might imagine, the local law enforcement authorities are less than helpful, and are downright hostile to the FBI crew. It is not hard to guess why this is the case. The law, the politicians, the business community and the general public all are in the same racist, putrid company. Again, the cast of villains and racists included the great R. Lee Ermey, Michael Rooker and the creepy sociopath Deputy Pell (Wormtongue!) played by Brad Dourif. The news interviews with the locals were as brutally racist as they are sickening. “Colored People” are viewed as no more than self-propelled garbage, and not even human beings.

As the investigation progresses, things get uglier as the local black population is terrorized, beaten and burned out of their homes and churches, the terror ensuring their silence. Anyone who the Klan even suspected of cooperation with the Feds was left burned out and/or hanging from a tree. Anderson had had enough and tossed procedure out the window to fight fire with fire. The bodies were eventually found, and the general public and the local officials dug in their heels to try to preserve their “way of life” and cover up their hideous crimes. As one critical witness finally reveals the truth, the case is broken and there is Hell to pay.

I won’t spoil the details, but after yet another assault on our sensibilities and justice, both Anderson and Ward have had enough and decide to go after everyone with all the power and fury that the situation deserves. “It is time for the rattlesnakes to start committing suicide”, Anderson snarls. What is the cure for intimidation and terror? A good healthy dose of their own medicine. Bullies are almost always cowards, and the cowardice of the KKK goons was exposed with much of their same, and in spades. The culprits were tried and convicted in federal court for their crimes. No one got more than 10 years though, despite the heinous nature of their crimes.

One question that was echoed throughout the movie was “Where does this hatred come from?” A better question today, over 55 years later might be “How does this hatred persist”? There are many answers and theories as to why this obvious injustice and hatred does persist. It is easy to blame religion, especially Christianity with its intolerance, bigotry and built-in misogyny. Another culprit is the failure of our educational system to actually teach history, and not a sanitized version of it. Glaring examples are the treatment of the War Between The States, and the genocide of the Native Americans. Myths about civil rights live on and thrive to this day. The concept that giving one group rights does not diminish the rights of the privileged, is a concept that persists as a virtual fact today.

I think that it may be time, especially with what we are facing in 2020, to confront the unsavory prospect that the American experiment may be on its last legs of failure. We are spoiled, we are selfish and we, as Americans have not realized that until/unless we get money out of politics, nothing will ever change. The rich get richer, and the privileged Whites in Mississippi and all over this nation, as poor and pathetic as they may be, are fed a diet of racism that the politicians gleefully harvest for their own gain. White America clearly does not realize who their real enemies are.

Mississippi Burning is a great movie. It is not a happy movie or one that when watched leaves us with anything more than shame, considering that it is not 1964 anymore…but 2020. The more things change, the more they stay the same, is a tired phrase, but it describes our dilemma. It is heart-breaking for Blacks to have to re-claim such hard fought and won basic rights, but the challenge today is real and frightening. Watching this movie is a real realization as to how far we still have to go.

8.0/10.0 with the Goatesians Rating of Why Have We Not Gotten Better Than This?

The Only Quote That Really Matters:

“It’s ugly. This whole thing is so ugly. Have you any idea what it’s like to live with all this? People look at us and only see bigots and racists. Hatred isn’t something you’re born with. It gets taught. At school, they said segregation what’s said in the Bible… Genesis 9, Verse 27. At 7 years of age, you get told it enough times, you believe it. You believe the hatred. You live it… you breathe it. You marry it.” – Mrs. Pell