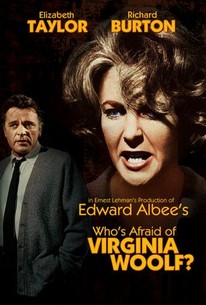 Who's Afraid Of Virginia Woolf?

Marital bliss has been described in many ways. “Death by 1,000 cuts” (Matt Cale) or “The state or condition of a community consisting of a master, a mistress and two slaves, making in all, two”(Ambrose Bierce). There are also many stages, the first being Disillusionment, which is the stage of marriage following Romance and before Misery. The marriage of John and Martha had apparently gone well beyond that final stage. This is Mike Nichol’s masterful adaptation of Who’s Afraid Of Virginia Woolf? Fueled by copious amounts of alcohol and catalyzed by an after party visit by a new young professor and his mousey wife, we are treated to 2 hours and 11 minutes of the pain and anguish of a rocky marriage.

After a welcoming party for new University faculty, a young professor and his wife (George Segal and Sandy Dennis) are invited over to George and Martha’s home for a late nightcap. As drinks are poured and consumed, Martha grows more vicious, making no secret of her disappointment in George’s status as a mere Professor, and not The Chairman of the History Department. To make matters worse for George, her father is the University President. Her tongue is her weapon, and she cuts to the bone. Seemingly timid and weak at first, George rises to the challenge like a wounded pit bull. Soon he matches her malice and contempt with dizzying word-smithing, designed for maximum damage.

Nick and Honey are shocked by the exchanges, caught in the crossfire of a full-blown war between Martha and George. They try to beg their leave, but their hosts will have none of that, and as the night wanes and bottles are emptied, they are pulled into an ever escalating maelstrom of vicious words, complete with a brandished shotgun. Curious kibitzers at first, Nick and Honey become active participants later in an unbridled melee of words, insults and even a scuffle at a late night bar.

The shotgun is a prop, and the fight at the bar is half-hearted, but the battle of wits and words raged on with ever-increasing collateral damage. Honey gets sick from too much brandy, and George and Nick retire to the back yard swing for same male bonding, ‘splaining and verbal archery… archery that George slings from a bottomless quiver. There are numerous reveals, including a colossal one towards the end that I will not spoil. Loose lips can sink ships, and also escalate dangerous marital games.

Who’s Afraid Of Virginia Woolf? is an Ernest Lehman screenplay that was based on Edward Albee’s Tony Award winning Broadway play. The audience is never really privy to the inside joke on which the movie title is based. There are only 4 characters in this masterpiece, and most of the movie takes place at George and Martha’s house, in the living room.

Who’s Afraid Of Virginia Woolf? showcases some of the greatest acting and scathing dialogue ever put on the big screen. It won 5 Academy Awards and was nominated for 8 more. It was a ground-breaking film for the time period because of the profanity and the violent assault on the institution of marriage. Richard Burton was in his usual form, but Elizabeth Taylor as Martha has never been better. She transformed herself from regal beauty in Cleopatra and a ravishing sex-pot in Butterfield-8, to a vile and foul-mouthed hussy in Virginia Woolf. Martha laughed, bellowed, brayed, snarked, jabbed, flirted, but most of all, eviscerated with an acerbic tongue stoked with alcohol. Taylor and Burton are magnificent in this classic masterpiece.