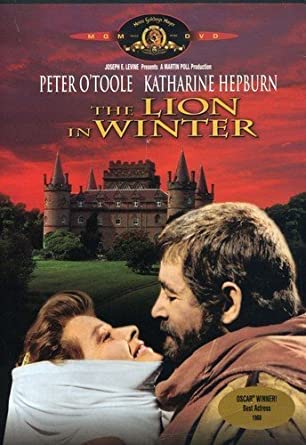 The Lion In Winter

King Henry II has 3 sons that want to inherit the throne, but none is worthy and this will be no King Lear

In Prussian folklore, there were 2 Lords with adjacent kingdoms. They had feuded for decades and absolutely loathed each other. Their hate had made for continuous misery for the people they lorded over and the Gods in the sky decided to do something that might bring peace. They wanted to be fair to both Lords, so they dispatched an angel emissary to the first Lord. “I will grant you ONE wish. You can wish for anything, gold, land or any other form of personal pleasure or riches. The only stipulation is that the second Lord will get DOUBLE what you are granted“, she said.

Without hesitation, he replied: “I want to be blind in one eye”

The Lion In Winter is the greatest movie ever to only win 3 Oscars, with another Academy slap in the face to Peter O’Toole. I guess that the Academy reveres retards the mentally and emotionally challenged (Charly and Forrest Gump) more than Saving Private Ryan and Peter O’Toole. I will never understand, but I will let nothing take away from one of the greatest scripts, casts and dialogue ever presented in cinema.

The shelves at Blockbuster were full of films about family values, family challenges, and dysfunctional families, but the mold was pretty much smashed with this masterpiece created in 1968. With headliners like Peter O’Toole and Katherine Hepburn, we are guaranteed a colossally good movie, but how about Anthony Hopkins in his maiden voyage of cinema?

As far as a battle of wills, wits, words and ruthless action, King Henry II and Queen Eleanor of Aquitaine have no peer, and had been after each other’s jugulars long before the MGM Lion makes his opening roar. Eleanor and Richard had once loved one another, but they loved territory and power more, and the King was more powerful than his Queen. He had had enough of her ambition, so he had her exiled for treason, ten years prior.

Kings were always thinking about lineage and heirs, especially in 1183, where things like insulin, antiseptics and antibiotics were centuries away. At the age of 50, Richard had already jettisoned his Queen for a sweet, young thing named Alais, who happened to be the sister of Phillip II (The young King of France). Unfortunately, with dowry already in hand, Alais was to be betrothed to one of Henry’s 3 sons, all who had significant flaws. Henry was also nuts about Alais himself and had no intention of giving her up. It was complicated, but about to get a lot worse for everyone.

As was holiday tradition, Henry let Eleanor out of her exile on Christmas Eve for a joyous family reunion with himself and their 3 sons. This happy family included the eldest, Richard, Geoffrey and the dim-witted John, Henry’s reluctant favorite to be heir to the throne upon his demise. King Phillip of France also joined the Yuletide celebration, so an epic two days of scheming, back-stabbing, betrayal, greed, lust and whodunit was about to commence with vigor.

Eleanor of Aquitaine, Henry’s estranged Queen, still had considerable clout, even in exile. She owned The Aquitaine, a province in France, that was of great political and strategic importance. So, the stage was set for a Christmas Eve donnybrook of words, promises, broken-promises, plots and schemes, with extreme emotional blackmail and manipulation. You get the picture, no one trusted anyone.

In one particularly ruthless scene, all 3 of Henry’s sons visit the chambers of Phillip II, at separate times, and unbeknownst to the other two. With each knock on the chamber door, the previous visitor was hidden behind a curtain. Deals were made, with subsequent betrayals. By the time we had our final knock, it was King Henry II himself. With all 4 Henrys in tow, Phillip II again betrayed all 3 of Henry’s heirs with devastating reveals of treachery and rape. In a fit of fury, Henry disowned all 3 of his sons and had them tossed into the dungeon.

Henry 2 was not having a good night, but it was to get worse. Here is where the spoilers end. Henry 2 simultaneously had the problem of too many sons and not enough sons. Henry was not King for nothing, and his solution to his dilemma was brilliant.

I have mentioned many ruthless players so far, but by far the most cold-blooded of the bunch was Eleanor of Aquitaine. She had been physically exiled, which was bad enough, but nothing was as pernicious as her emotional exile from the man she loved. Love and Hate are very close on the spinning wheel of life, so if she could not have Henry, she made it her mission in life to wound him as grievously as possible. No stoop was too low and no horrific and devastating lie was too outrageous for Eleanor to use. She owned the Crown Jewels, so she might as well use them. Lady Kaede in Ran had nothing on Katherine Hepburn.

The Lion In Winter was cinematic story telling at its best. The story was adapted from James Goodman’s Broadway play, and he won an Oscar for his effort. Peter O’Toole was a robust and raging King Henry and was born for this role. Again, him losing Best Actor Awards in subsequent years to oafs like Cliff Robertson and John Wayne remains one of the biggest travesties in The Academy’s dubious history. Equally the powerhouse was the banished Queen Aquitaine played by the indubitable Katherine Hepburn. Every masterful line was designed to deliver maximum pain or almost irresistible manipulation. Never have a tandem of actors been better in any film.

10.0+/10.0 With The Goatesian Rating of The Greatest Medieval Movie Ever Made