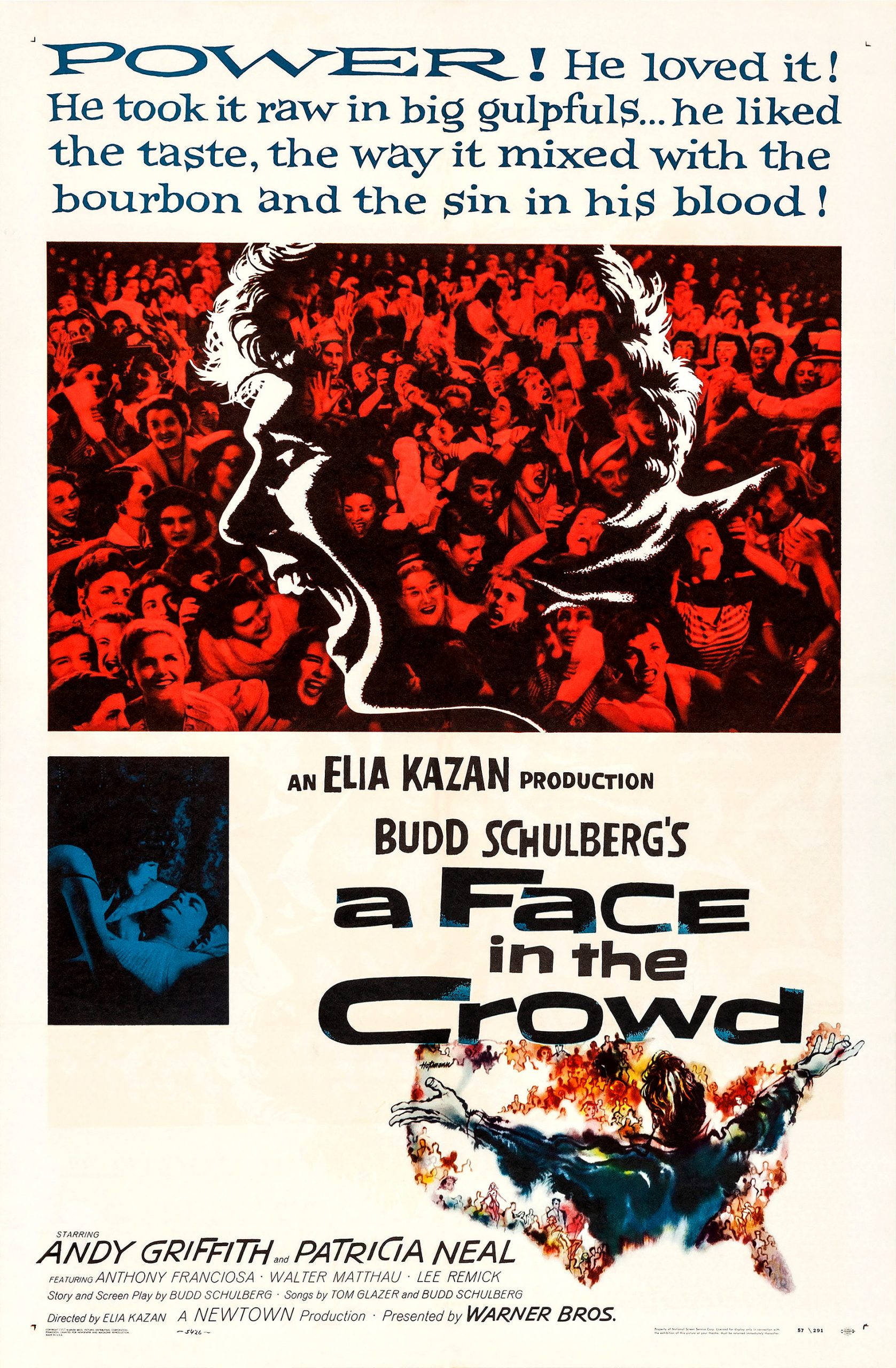 A Face In The Crowd

An Arkansas drunk and drifter becomes an overnight sensation and obsession. Will he be exposed for what he really is?

A Face In The Crowd made me sick. I hated everything about it. I wanted to reach through the flatscreen and punch Andy Griffith’s grinning mug. Why? Because every minute of this movie reminded me of our sitting Idiot In Chief, Donald Trump. This movie was made in 1957 and was as white as Wonder Bread…Oh, except for the darkies serving the big shots drinks, late at night, and characterized as “monkeys” by Donald Trump…Uh, I mean Lonesome Rhodes.

This movie was a satirical cautionary tale starring Andy Griffith as Lonesome Rhodes. Rhodes was discovered at rock bottom in jail by Marcia Jefferies (Patricia Neal) who transformed him into a radio star. He was brash, opinionated and immediately embraced by the public. “A guitar beats a woman any time” was an early quote by Lonesome Rhodes, and this quote was a stunning and sobering reflection of this movie and his charismatic rise to fame. The guitar is a symbol of his instrument to control, to manipulate, to twist, be it truth or pure bullshit.

This movie was the very foreshadowing of Donald Trump, over 60 years ago. This movie, with its glaring reality, shows that we, as Americans, have always been pretty gullible and stupid. Not much recently has infuriated me as much as this movie, but let me compose myself if I can, and get on with the review. I have just now read of the death of Ruth Ginsburg. This is not helping me love this movie’s main character one bit.

Andy Griffith is magnificent as the “Aw, Shucks” homeboy with a never-ending gift of gab and charisma. His charm knows no boundaries as he pushes every button to attract the avarice of the mighty and powerful, as well as the gullible minions. His rise is meteoric, through radio, television, business and merchandising, to the most exploitable of them all, politics. The warning sirens are blaring, but there seemed to be no stopping this sociopath, who had no regard for anything but his own ego.

Equally magnificent in this movie was Patricia Neal, the one who discovered Lonesome Rhodes. She too was smitten and swept away by his swag and charisma, until she finally woke up and exposed his awful hypocrisy. Her whirlwind ride with Lonesome was particularly painful as she was deeply in love with this ruthless grifter. His comeuppance was bitter-sweet for her, and everyone else, as no one could feel good after watching this movie. Walter Matthau also starred as a supporting actor in this movie, and was never fooled by Lonesome’s facade. He was a rather meek player at first, but his performance was predictably powerful towards the end of this movie.

I had never heard of this movie until it was recently recommended to me by a couple of friends. Considering today’s political situation, this movie is a devastating example of what could happen…and more importantly, what DID happen. This powerful movie depicts America as being greedy, racist, paranoid, gullible and star-struck. This was 1957. It is now 2020 and I can confidently state that not much has changed.