The Christmas That Almost Wasn’t 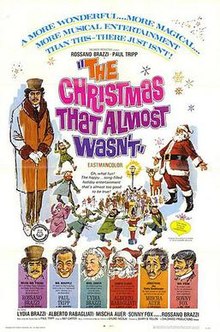 The Christmas That Almost Wasn't

Christmas is fast approaching and another year of watching and reviewing Christmas movies is winding down. This movie is yet another recommendation from one of our fine readers. The Christmas That Almost Wasn’t should have been named The Christmas Movie That Wasn’t. So, what went wrong with this wonderful Santa Save Christmas Movie? The short answer is EVERYTHING.

The opening cartoon animation and music should have been a big enough red flag to turn this thing off and forget that it even existed. Trust me, if you are going to try to endure this Christmas crap-fest, have fresh batteries in your remote and the mute button handy.

Here’s the skinny. Santa, who looks like a unhappy derelict encounters Mr. Whipple, an attorney who like outdoor Christmas decorating. We soon learn that the sad-sack Santa is about to be evicted from the North Pole because of unpaid rent to the villain, Mr. Prune. Prune hates Christmas and little kids, but by George, Christmas must be saved! So, Mr. Whipple, like a good meddler, takes Santa’s case pro-bono and promises to influence the evil Mr. Prune, but without success.

Then, in a brilliant brainstorm, Whipple convinces Santa to raise the money by getting a job playing Santa at the local upscale department store! Brilliant! Of course, Mr. Prune and his evil henchman Blossom must undermine Santa so Christmas will not come. But, Christmas must be saved! That’s enough plot. I think everyone knows where this is going.

This movie was drab, depressing and downright creepy. Santa’s palatial edifice at the North Pole was a tiny, dirty cottage, and his elves looked like something out of the movie Freaks. Santa was weird enough, but the opulent Ms. Claus was downright terrifying she was so bad. Brazzi made the brilliant decision to cast his own wife as Ms. Claus. Not good.

This Christmas gem reminded me of the awful movie Santa Claus (1959), creepy reindeer and all. I don’t know who was responsible for the score in this movie, but even if everything else was competently done (it wasn’t), the attempt at making this mess a musical was a total failure. My words cannot adequately describe how very bad it was. Like I mentioned, the mute button is your friend with this one.

.5/10.0 With The Goatesians Rating of There Is Not Enough Alcohol To Make This One Watchable