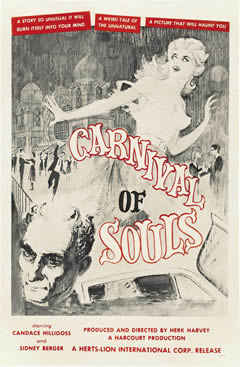 A woman’s life becomes disturbingly bizarre after she walks away from a horrific car accident.

Carnival of Souls is one of the 50 horror movies included in the Amazon movie bundle (still available!) that I purchased years ago. Most of those movies were more laughable than horror, and really cheesy affairs, like The Beast Of Yucca Flats. Others were well made and effective, even if they were low budget. The set of 50 contained many horror classics, like Romero’s Night of the Living Dead and The Last Man On Earth, with Vincent Price. Carnival Of Souls is one of the best of the bunch, a very creepy and disturbing film.

After a drag race that goes horribly wrong, Mary Henry emerges muddy, shaken but apparently unscathed from the vehicle that goes off a bridge into the river. Her companions are not as fortunate. After this devastating and life-changing experience, Mary understandably wants a fresh start and applies for a job as the organist at a church in Utah. Her drive to Utah is very reminiscent of the movie Psycho as she hallucinates on the lonely road, probably an after-effect from her traumatic wreck. I must say from the start, the music in this film more than sets the mood of apprehension and dread. It is the driving force that makes this horror film what it is.

Mary checks into her boarding house and visits the church where she will be employed to play the organ. Into a new life away from her tragedy, things don’t seem to be quite right. She is obsessed with an old carnival pavilion that she passed on the way to the town. She also meets a really boorish and somewhat repulsive neighbor at the boarding house, a real nuisance of a creep. He will turn out to be the least of her worries. Her very existence seems to be on tilt, and she cannot grasp exactly why.

After a long evening of nightmares, hallucinations, visions and other dread, Mary is glad to see another human, even her stalking neighbor, who brings her coffee. She is detached and unhinged, and still strangely fascinated and drawn to that large abandon pavilion on the edge of town. She even talks her pastor into driving her out there, unable to get it off her mind. And then there is that pasty face, that apparition that comes again and again. Her interaction with the towns-people becomes more strained and tilted as the days go on, and Mary is slowing losing her mind.

We never heard much from director Herk Harvey (who also played the haunting face), or Candice Hilligoss after this disturbing film. That is a shame, as this black and white horror film is a classic. The persistent wide-angle shots, the “dead”-pan demeanor of all the actors, and boy howdy, that relentlessly haunting music really set the tone for squirming horror. There are no real special effects, this was 1962, but there was a never-ending pall that was draped over this horror film like a chilling fog.

What really happened to that poor, tortured woman? I’m sure not going to spoil this great watch that is available on Prime Video and also free in the public domain at YouTube. Be sure to watch it alone for maximum effect.

8.0/10.0 With The Goatesians Rating Of Better Than The Twilight Zone