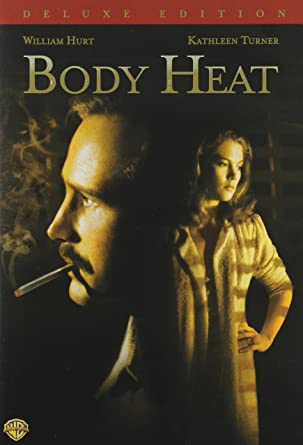 Lust, murder and the sound of wind chimes during a Floridan heat wave

Now this is my idea of a Strong Female Role.

Kathleen Turner’s performance in Body Heat hasn’t quite carved itself into pop culture as unmistakably as Louise Fletcher in Cuckoo’s Nest, Judy Garland in Wizard of Oz or Gloria Swanson in Sunset Boulevard, but it’s hard to think of any woman who’s made a better starring debut.

Does she stare down guys a foot taller? Can she do a roundhouse kick? Is she armed to the teeth?

Instead her character Matty Walker utilizes a sphincter-trembling arsenal of feminine wiles, searing intelligence and fearsome verve to grab Ned Racine’s sweaty dick and lure him to his doom while skipping away with a fortune.

He first spots her at an outdoor concert by the beach. As he stands at the back, she gets up to leave. Dressed in dazzling white with her split knee-length dress fluttering in the breeze, this Machiavellian vixen sure knows how to saunter.

In The Godfather Michael Corleone got hit by a ‘thunderbolt’ when he clapped eyes upon the Sicilian beauty Apollonia and Racine’s no different here. However, it’s not until Matty gets a few feet away that she plays her trump card.

She doesn’t even look at him.

As any guy will tell you, an attractive female’s obliviousness to our existence is an unforgivable snub to the male ego. Racine can only forlornly stare at her receding figure, but it’s all there in his cunt-struck eyes. Matty has expertly sunk her pussy-scented hook into his malleable flesh without even saying a word.

The poor sod and his silly little tash have to follow.

He finds her leaning against a fence staring out at the darkened sea. An attempt to strike up conversation results in a concise rebuttal: “I’m a married woman.” It’s the first blast of Turner’s wonderfully husky voice and by now I doubt there’s a man in the audience who wouldn’t also be willing to gamble everything on trying to burrow between those silky smooth thighs.

Matty is a sensational creature. Sure, she’s got the body and the walk, but did I mention the shoulder-length chestnut mane, the gorgeous smile and the confidence oozing out of every pore?

This is no girl. This is an elegant, bullshit-free, verbally-combative woman who smokes and drinks and knows what she wants.

And she’s terrifying. If I ever met her, I’d fall at her feet and weep.

Mind you, Racine deserves a fair amount of credit for managing to play it pretty cool in the early stages. Not once does he drool. He even makes her laugh, a moment of levity that causes her to spill cherry ice onto her top. He offers to get a paper towel from a nearby washhouse to wipe it off, prompting her to call after him: “You don’t wanna lick it off?”

And, of course, when he hurries back out with the towel, she’s gone.

Wow. What an unforgettable introduction.

Racine, of course, prowls bars looking for her, blithely smothering any instinct he might be biting off more than he can chew. It’s of no consequence that she’s already made troubling remarks such as “Most men are little boys” and “You’re not too smart, are you? I like that in a man.”

The overt sexiness of Turner’s full-blooded performance is only matched by her naked greed. However, she never slips into the caricature of an evil puppet master controlling every aspect of the spiraling events. She remains believably human, even if her body temperature does run a couple of degrees above normal.

Perhaps her best scene arrives when the hapless Racine comes to her home, ostensibly to check out her wind chimes. She later asks him to leave but when he goes to his car he can’t drive away. As she’s already told him: “Some men, once they get a whiff of it, they trail you like a hound.” Racine simply has to return, breaking off his agitated pacing to stare at the temptress through the window of the locked door.

Matty, knowing she’s prepared the groundwork, doesn’t need to do a thing. She just stares at him, an implicit dare in her eyes, waiting for his brute, animalistic nature to surface. He smashes his way in and takes her on the carpeted floor. His violent decisiveness makes a wimp like me want to cheer, but I also know the poor sap is little more than an oversexed fly wandering upon the womanly leaf of a Venus flytrap.

Matty’s no dud lay, either, and before long the combination of the sweltering heat and Racine’s near-constant ejaculation has almost desiccated him. He can’t think straight, especially as Matty’s always whispering sexed-up stuff in his ear, such as “I’ve never wanted it like this before.”

She really is the master manipulator, giving him presents, taking it up the ass and lounging around in an ice cube-filled bath with him. Sometimes she’s girly, needy and vulnerable. At others she’s decisive, level headed and cool. Patiently she waits for her lover to come up with the plan to murder her rich bastard of a husband, even appearing squeamish when he voices what they both want.

And unlike Lady Macbeth, she only gets stronger once the deed is done.

Turner would never be this good again, employing her intelligence to good use immediately after Body Heat’s runaway success by sending herself up with the portrayal of a gold-digging femme fatale in the excellent comedy, The Man with Two Brains.