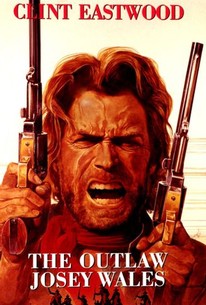 Josey Wales joins a Confederate guerrilla unit for revenge of the murder of his family. The ensuing bloodshed leaves him as an outlaw on the run.

The Outlaw Josey Wales is not just another Clint Eastwood revenge movie, but a unique Western that focuses on the continuing violence, hate and treachery following the American Civil War. Josey Wales is minding his own business as a sod-buster when a bevy of Yankee Redlegs unexpectedly show up to torch his spread and kill his family, leaving him to die in the mud. Well, if you know Clint Eastwood, you know that this outrage is not going to stand.

Josey joins a renegade Confederate gang who harass the Union soldiers across Missouri until the gas runs out, and their leader Fletcher (John Vernon) has had enough. He arranges a truce and surrender. Wales smells a rat, does not surrender and his suspicions were confirmed as the double-cross fulminates and his former comrades are gunned down. In typical Eastwood fashion, he rushes in, commandeers a Gatling Gun, and mows down a bunch of Yanks. Josey Wales is now a hunted man and a rogue outlaw.

The balance of the 2:15 run time is devoted to Josey Wales running into trouble, from trouble and sometimes brutally dispatching that trouble in typical Eastwood style. Spit!-Blam!-Blam. Josey Wales also encounters and rescues from grave danger many unusual characters along his journey. Josey and his new extended family includes two “redskins” and the remnants of an unfortunate family that was sacked by Comancheros. More about the characters later.

I didn’t realize that Clint Eastwood also directed this great Western, but he took over the reins after Phillip Kaufman was fired or left. Even though this film is a Western, it had its roots firmly in the Civil War, but with a unique slant on the Confederacy. There was plenty of villainy to go around in The War Between the States, but The Outlaw Josey Wales focuses on some of the unsavory fringe elements that specializes in terrorizing the civilian population. Josey Wales and his crew face savagery from all sides, Indians, Comancheros, Redleg Union renegades, not to mention the bounty hunters on the trail of the outlaw Josey Wales.

The Outlaw Josey Wales is much more than just a Western, as Eastwood successfully melds together all the diverse elements of this great film. He not only gives us a believable portrait of a man and a character that we really care about, but also incorporates many top-drawer performances from the supporting cast. It is not perfection, as we see too little of John Vernon, John Russell, Will Sampson and Sam Bottoms (Lance, the surfer!), and too much of Sondra Locke.

Standout performances other than Eastwood’s are the unforgettable Chief Dan George as Lone Watie and the always reliable John Vernon. A shout out too for the feisty Paula Trueman as Grandma Sarah and Geraldine Keams as Little Moonlight. I think that Grandma Sarah would have put up a much more memorable fight against the rapist Comanchero than the doey-eyed and passive Sondra Locke, but that is not important now.

What is important is that The Outlaw Josey Wales is just a great film that hits all the buttons. I don’t think it measures up to the high standards of Eastwood’s masterpiece, Unforgiven, but what else does? This movie is a Western that again reflects on the often-unsavory history of the United States and the savagery that humans inflict on other members of their species.

The Outlaw Josey Wales is just a beautiful film to watch and enjoy. The characters are believable and loveable, and the dialogue and one-liners are right up there with the best of the best 80’s Action movies.

10.0/10.0 With The Goatesians Rating of A Must Watch Iconic Western