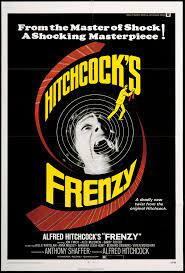 Necktie party has new meaning in this Hitchcock thriller

Well, there’s a bit more to this blackly comic, London-based thriller than bare breasts, but they’re the most obvious sign the legendary director had embraced the early seventies’ newfound freedoms.

Frenzy is graphic at times, much more so than other serial killer efforts such as Shadow of a Doubt and Psycho, but it’s not quite up to their high standards. Saying that, when the Master of Suspense’s penultimate flick is good, it’s very good.

Dark humor runs throughout, best illustrated by its opening beside the River Thames in which a government minister tells an assembled crowd about the ‘ravishing sights’ a regeneration project is about to bring only for a nude female corpse to float into view. A ligature is wrapped around her neck, indicating she’s the latest victim of the so-called Necktie Murderer.

Unlikable barman Dick Blaney (Finch) immediately comes under our suspicion by getting himself fired for stealing, drinking too much, and generally being a resentful, sullen loser on the verge of violence. He’s a self-confessed ‘bad penny’ with a string of failed businesses behind him. “Life can be very unfair,” his ex-missus Brenda (Leigh-Hunt) tells him, a woman who recently divorced him on the grounds of extreme cruelty.

Meanwhile, his chipper mate Bob Rusk (Foster), who runs a fruit stall in the West End, seems to be a standup guy with plenty of helpful suggestions about what to do next.

Well, it doesn’t take long for Hitch to reveal things aren’t as they seem. Rusk pops along to see Brenda, a visit that results in his mask of jovial normality somewhat slipping when he tells her she’s his ‘type of woman’. Moments later he’s thrown her onto the sofa, climbed on top and ripped her dress open to expose her bra. Then, as if in a drunken stupor, he mutters “Lovely… lovely… lovely…” He starts grunting the refrain and almost shouting it as his frenzy builds. By now his face has turned sweaty, he’s panting and there’s a look in his eyes that suggests a complete lack of comprehension at the depths of his own depravity. Whatever the case, he’s at the mercy of these dark, swirling forces, no more able to stop them than Brenda can prevent her asphyxiation. It’s a lengthy, marvelous depiction of murder, showing such a crime to be a pathetic, achingly unfair business.

Another standout sequence includes Rusk taking his next victim to his apartment and closing the door before Hitchcock’s camera silently retreats down the stairs and out into the bustling street to leave the sex killer to his sordid private ritual. It’s a bravura piece of directing because it suggests murder can be just a stone’s throw away as we go about our lives.

As you can tell, Frenzy’s strength lies with the killer because it does tend to wobble when following some of the other characters. In particular, things grow self-indulgent and superfluous when the lead detective recounts the facts of his case at home while his wife serves inedible gourmet food. Indeed, all the authority figures feel like they’re only a step or two away from appearing in a Monty Python sketch. For every character that works (Bernard Cribbins as a judgmental, mean-spirited pub landlord) we also get a semi-hysterical, one-note waste of space such as Billie Whitelaw. At least London itself with its markets, red double-decker buses, tea rooms, doss houses, black taxis, miniskirts and pigeons is vividly portrayed, especially the sweeping opening shot along the Thames.

So, although Frenzy could have done with more ruthless editing, it does feature salty dialogue (“Half the time he’s pulling your tits instead of pints”), some nice directorial touches, a gripping scene with an uncooperative corpse on the back of a potato-filled truck, and a withering condemnation of instinctual finger pointers.

Most of all, its excellent depiction of an experienced serial killer gets it over the line.