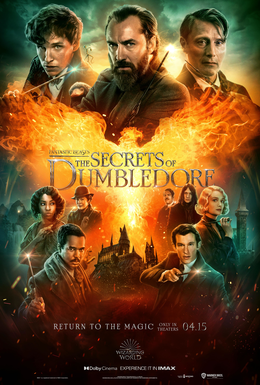 How to make magic boring

We are often faced with choices in life that we wish we could go back and choose again. While walking into the screening of Fantastic Beasts: The Secrets of Dumbledore, I was presented with a choice of schwag for the film – would I like a movie poster or a reusable, cloth grocery bag? As a fan of movie posters, I took the poster offered to me. After watching the film, I realize I made a terrible error. As much fun as it would be to poke a thousand thumbtacks through the poster to express my opinion of this movie, I could at least have made use of the grocery bag. I would have turned it inside out to avoid the shame of carrying around an advertisement for the film, but at least its sole purpose wouldn’t have been to rot in a landfill for its entire existence.

(SPOILER ALERT – Despite there being very little plot to speak of, I’m going to speak of it anyway.)

It’s been three and a half years since the last Fantastic Beasts film – The Crimes of Grindelwald – and it’s safe to say quite a bit has happened in real life since then and is still happening. Suffice it to say, trying to remember anything that happened in Crimes after absorbing recent IRL events is a monumental task. It also doesn’t help that Crimes was so forgettable. In fact, it was so unmemorable that it didn’t even phase me when Mads Mikkelsen appeared in the new film as Gellert Grindelwald, in place of Grindelwald’s former portrayer, Johnny Depp. To be specific, my response was “well, I guess Depp is out.”

The film opens with Newt Scamander (Eddie Redmayne) tending to a magical beast called a qilin, underneath a rock arch on top of a mountain. That word is pronounced: chill-in, and, yes, it’s as dumb as it sounds. I chuckled every time it was uttered on screen. That aside, it was nice to see a new creature introduced, since the last film decided to all but abandon the concept of showing us fantastic beasts. This time, the film embraced this new beast by making the qilin the film’s MacGuffin. Newt is there to assist with the birth of a baby (maybe called a chill-y? eh?) but is attacked by a couple of Grindelwald’s hench-wizards, including Credence (Ezra Miller). They kill the mother and steal the baby, leaving Newt unconscious in a river. Newt wakes, returns to the dead mother, and is greeted by a second baby qilin.

Meanwhile, Albus Dumbledore (Jude Law) meets with Grindelwald at a cafe. They discuss the anti-muggle pact they made when they were young, which Albus chalks up as a mistake he made because he was blinded by his love for Grindelwald. If there is one through-line in all of the Potter-verse, ahem, Wizarding World (try as hard as you want WB, it’ll always be the Potter-verse), it’s that dark wizards are driven by racism as their sole motivation for everything they do. Grindelwald is no exception, as his plan continues to be the subjugation or extermination of muggles. One small problem – Grindelwald is an escaped fugitive and accused murderer being hunted by the wizard cops.

Those two paragraphs intersect to form the mess posing as a plot. As we learned in the previous film, Grindelwald can see bits of the future. This is how he was able to send people to capture the baby qilin. We eventually learn that qilins are used to select the leader of the entire wizarding world. Apparently, qilins can see into the hearts of all people and know who is pure and who is not. To those who are pure, they will bow in respect. In that case, why the hell is anyone campaigning and why are there people advocating for one wizard or another? On top of that, do wizard leaders not keep a qilin in some sort of protected sanctuary that is kept in the public eye, in order to prevent any shenanigans? Nobody is going to question the fact that the qilin being used in the selection isn’t glowing, despite that being a qilin’s defining physical feature? And what happens if the qilin doesn’t bow to anyone? And they say muggles are the inferior ones.

My friend summed up the movie quite nicely, saying “I didn’t care about anything or anyone at any time during this movie.” If any one scene is the epitome of that statement, it’s when we meet the group of people Albus has assembled who are going to try to stop Grindelwald. Returning is Newt’s muggle friend Jacob (Dan Fogler), Newt’s brother Theseus (Callum Turner), Lally (Jessica Williams), Yusuf (William Nadylam), and Newt’s assistant Bunty (Victoria Yates). Apparently, all of these characters appeared in the previous film, yet Jacob is the only one that I could remember. It didn’t help that they were all introduced to each other by name in the scene, as if the film is as unfamiliar with them as the audience. But, to my point, I didn’t care that any of them were there either.

Jacob’s charm was stomped on in the last film and is essentially there as trolling of Grindelwald by Dumbledore, if not trolling of the audience by J.K. Rowling. Yusuf is supposed to be a spy, but Grindelwald can see the future, plus Grindelwald has Queenie (Alison Sudol) reading the minds of anyone who comes near. The fact that Yusuf is a spy is literally the first conversation topic between Yusuf and Grindelwald, so what’s his job again? Theseus and Lally are the muscle known as aurors, though Lally should have been pushed from their train for whatever the fuck was the affectation she was going for with her dialogue delivery. Conspicuously missing are Tina (Katherine Waterston) and Albus, though Albus at least has an excuse – he can’t even think about fighting Grindelwald due to their blood pact. All in all, it’s a group that exudes nothing but shrugs throughout the film, mostly due to them barely mattering to the plot.

Speaking of not mattering to the plot, this won’t be the last time we see Grindelwald. Like every film in the Potter-verse, save The Deathly Hallows Part 2, the film ends without concluding anything important. We haven’t met any new, interesting characters and the ones we have met inspire little more than yawns. We haven’t gotten any new story arcs to follow and the main story – dark wizards hate muggles – is as uninteresting as ever. All we’ve seen is a couple of minor subplots conclude and an implicit To Be Continued…

In addition to the film not making us care about anything, it was straight boring. How the fuck do you make a movie about wizards and magical animals boring, J.K.?! All I wanted from this movie was to be entertained for a couple of hours and see a bunch of magic. What I got was a wand fight that might as well have been a laser gun fight (just different colored balls of light flying at each other), a few floating teacups (which we already saw in Beauty and the Beast, so not impressed), and Newt and his brother doing a goofy walk to avoid being attacked by some scorpion-crab things in a dungeon. The most boring movie I’ve ever seen used to have an easy answer. Now, I have to pause before I answer The Curious Case of Benjamin Button.

Rating: Ask for all of your money back for two movies worth of Potter-verse.