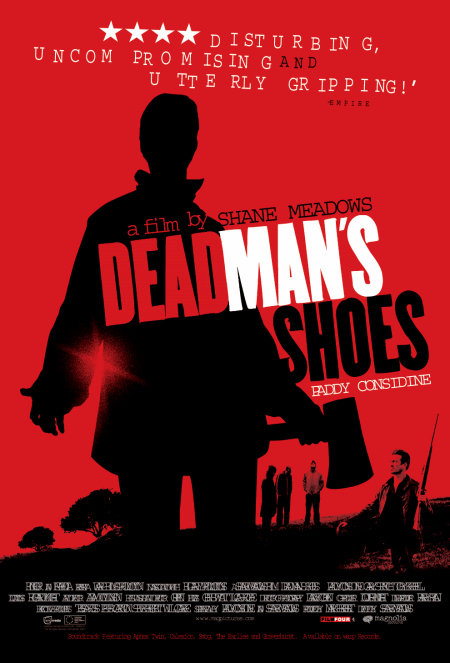 Bullies beware of a returning soldier.

So says our heartbroken, self-loathing main man in an ominous voiceover at the start of this revenger. And, of course, he finds ‘them’ and does a wee bit more than issue a stern telling off. Sounds like formulaic stuff, yes? And to a point it is, but Shoes is still a long way from the simple exploitative thrills of watching Bronson hunt down cocky, loudmouthed punks on the streets of L.A. Indeed, if you’ve tired of such stone-faced, trigger-pulling antics, you could do worse than give this British cult flick a whirl.

The story: Richard (Considine) is an ex-paratrooper back in town to set right the somewhat unsporting treatment meted out to his mentally disabled younger brother by a king bully called Sonny (Stretch) and his goons. Face-painting is just the start.

Why it works: The depiction of Sonny’s drug-dealing gang. This is one bunch of thick, incompetent chavs. Pranks, binge-drinking, acid trips and leeching form the basis of their useless days. “Janet loves al fresco fun so why not join her as she spreads herself wide in the open air,” one chav reads aloud from a porno mag before pausing to ask a mate the meaning of al fresco. “Al fresco…?” comes the reply. “That’s up your anus, isn’t it?” Perhaps the most telling symbol of their small-time ridiculousness is their main form of transport, a clapped-out, green and white Citroen 2CV. In essence, it’s a clown car, although at least they listen to gangsta rap in it. Bronson might manage a one-liner or two in his flicks to help lubricate the carnage, but Shoes prefers black comedy and queasy laughs.

Shoes’ rural flavor (it was filmed in England’s Peak District) also offers a less run-of-the-mill setting for a revenge thriller. Rolling green fields, a farm and a castle are just some of the locations used, often accompanied by a semi-acoustic, folksy or choral soundtrack. These atypical choices effectively contrast against the stabbings, expelled brains and occasional dismemberment served up by our deranged hero.

What works against it: The casting. Unfortunately, someone decided Considine should be the avenger and Stretch the abusive thug. Don’t think so. Considine is a decent actor but doesn’t convince as an army man on the warpath. He snarls, swears and threatens but I never really bought it. The way he carries himself also lacks that distinctive military bearing. On the other hand, Stretch is a former light middleweight boxing champion. Fourteen years after he won a WBC title he’s still clearly in shape. In particular, there’s an eyeball to eyeball confrontation on the street between the two during which the six-foot-two Stretch looks like he could kick the shit out of the shorter man without even breaking sweat.

Apart from the bungled central casting, plausibility also gets strained. Our ninja-like avenger shows his hand very early on, having decided on a campaign of psychological warfare first. This quickly sows the seeds of panic but it results in a case of six fully aware chavs against one little bearded guy. Somehow they fail to lay a glove on him, even after he tells them he’s living at an old farmhouse. They then rock up to his place with a telescopic rifle and one bullet. Now I know this lot are deliberately portrayed as thickies, but bringing such a severe lack of ammunition is… well, thick. After all, the guy has murdered one of them the night beforehand with an ax and left the phrase ‘One Down’ daubed in blood on the wall by the corpse. He fucking well means business, all right, so why don’t they rush him with pickaxe handles, flee town, tip off the cops or try to run him over in their clown car? Or better still buy a box of bullets.

In addition, I have no idea why our punisher is frequently wearing a gasmask.

Verdict: In some ways Shoes is as simplistic as the likes of Death Wish II, although it has a much quirkier feel and the odd surprise. The black humor probably undermines attempts to build tension, but is far and away the flick’s most memorable aspect, especially when drugs get ingested. Shoes also demonstrates that killing people left, right and center isn’t the most fulfilling of pastimes. Bronson would surely chafe at such a depiction; he’d most definitely tut and roll his eyes at the way things play out during the finale.