Why Liberals Will Never Win The Gun Control Debate

For many gun owners, gun control isn’t a debate. It’s a threat, yet the left insists upon having this conversation after every mass shooting. Gun control advocates need to understand how these people see themselves, what role guns play in their lives, and how they view the world. At times, they teeter between shrieking cowards governed by self-preservation who should be pitied and garbage people craving power who should be demonized. What needs to be understood is how every part of their existence and self-worth is tethered to firearms. Before we can even have a gun control debate, this must be understood, acknowledged, and addressed….anyway, I’m going to try and depress the shit out of you, enjoy. 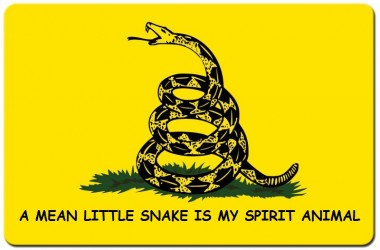 A gun is probably the most powerful thing there is. Every time my supple palm feels that ergo polymer Blackhawk grip, the memories of my bullies vanish. Poof. Gone. As the rail mount thumb rest brushes against my skin, I’m transformed. I can feel the freedom and power electrifying my hand. A sizzling churning of confidence tumbles through my mortal vessel. Am I holding this gun, or is this gun holding me?

I am George Washington. I am Chris Kyle. I have a warrior inside of me. I’m connected to my heroes via this constitutionally protected AR-15. I have freedom. I have power. I have to get up for work in the morning. Shit, what time is it? Better get some sleep. As my head hits the pillow, will the images come? Of course they will. They come every night. Armed men rush into my home. Everything from uniformed bringers of tyranny to wild masses of disorganized thugs bottleneck at my front door. They break. They enter. Here they come, single file, like ants. They begin firing and screaming. I roll out of bed between the muzzle flashes and gnashing of teeth. All goes quiet as I feel the cold, slender trigger against my fingertip. Then, I start squeezing out freedom one hollow-point at a time. I defend admirably, using tactical maneuvers fellow patriots have taught me on Youtube. I clear my house. I exterminate with extreme precision and prejudice. Sometimes I get hit, usually in the shoulder or somewhere minor. I have lived out another sick elaborate fantasy of being attacked. I am stronger for it, and now feel like I have earned my right to sleep. My constant fears force me into this warrior lifestyle, this warrior mentality. 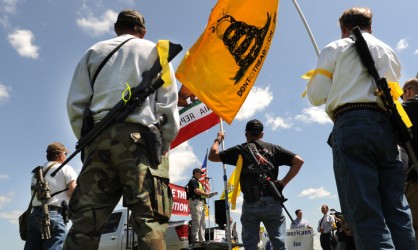 Owning guns makes me a warrior. Worshipping the troops makes me a warrior. Using the word warrior makes me a warrior. I am a walking manifestation of the principles that guns represent. I am a human gun. I am a warrior gun. I am practically one of the troops myself. I may have never served anything. I may have never protected anyone. But by owning and waving, I’ve kept this country a little bit safer, safer from being invaded, safer from having our rights stripped, safer from left-wing activists. I probably deserve to be formally recognized for this, but I won’t hold my breath. True heroes often go unnoticed. Me and my Facebook followers understand the important role I play in keeping guns legal. The government knows too. I am aware they are surveilling me on social media, but I just can’t stop revealing my location, weaponry, and ideas. My meme-sharing has made me a target, but my posts are just too valuable to society for me to delete my account. 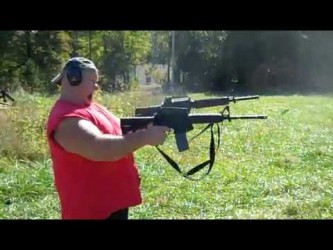 I imagine they view me as rugged. Individualistic. Self-reliant. I’m someone you wouldn’t want to piss off.

I may only go to the range once a month or so, but I go shooting on social media every day. When I antagonize the libtards with my posts, I see myself through their eyes. I imagine they view me as rugged. Individualistic. Self-reliant. I’m someone you wouldn’t want to piss off. I show no mercy for feminists, vegans, transgenders, or any other group whom I’m convinced would never physically harm me. They’re probably all too scared to even hold a gun. I’m not. I hold my gun and marvel at its power. I think about how I could kill the bullies from high school. I could even kill the liberals from the internet. Lucky for them, I’m a sane, responsible gun owner. They are so so so lucky. They don’t even know. 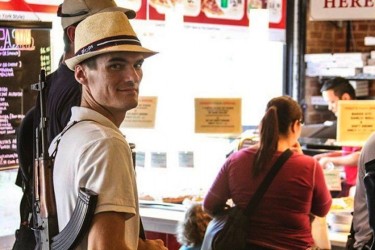 They don’t realize that pro-gun patriots actually feel safer after one of these mass shootings. We realize that we would have stopped it. We understand that we could never be victims because we own guns for almost every situation.

So now we have another mass shooting, and predictably, here comes the left whining for more gun regulations. They become more scared after these tragedies. They don’t realize that pro-gun patriots actually feel safer after these mass shootings. We realize that we would have stopped it. We understand that we could never be victims because we have guns for almost every situation. I have a Nighthawk AAC Recon with a laser sight. I call it my movie theater gun. I never watch a film without it. I can finally go to the movies and not have to worry about anyone kicking the back of my seat either. It just gives me that overwhelming feeling of safety and freedom. If you think I’ll give that up and go around living in fear all the time, you’re mistaken. I’m not saying the victims deserved to die, but if they would have been more like I am, they might be here to talk about how they stopped this terrible thing instead of me writing about how I would have. 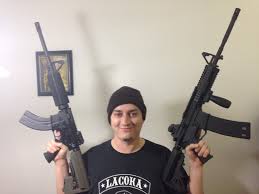 Asking me to give up my lifestyle would put this country in danger, and that would weaken America. I’m too important to have my guns taken away.

I know the statistics say I’m much more likely to be killed with my own gun than to use it to save my life. I don’t care that a civilian has never prevented a mass shooting, ever. I’m different. My training guarantees that I’ll never be killed with my own gun. My tactical abilities ensure that I would be able to stop a mass shooter. Asking me to give up my lifestyle would put this country in danger, and that would weaken America. I’m too important to have my guns taken away. This country needs men like me, now more than ever. Can you imagine if only criminals had guns? They’d be running around killing people and us gun owners wouldn’t be able to even stop them in our hypothetical fantasies anymore. That’s not an America I want to live in.

Sadly, Americans are getting too soft, and I fear it will kill us. Even these anti-bullying initiatives are secretly anti-gun campaigns. Without bullies and tough guys intimidating me, I would have never become the patriot that I am. If the youth of this great nation are never challenged, they might not feel the need to pick up arms and become real men. 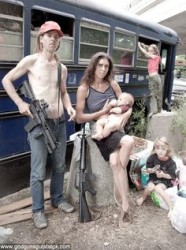 We cannot argue with my interpretation of the constitution.

But this entire debate is just another distraction blown out of proportion by the media. Scared people are focusing on the real life dead bodies right in front of them instead of valuable principles founded two hundred years ago that grant mentally unstable drifters the right to own semi-automatic handguns. We cannot argue with what I imagine the constitution to be. I won’t be distracted by these domestic acts of terror. I’m distracted by real threats like Jade Helm and the FEMA camps.

We have to be ready to kill now to protect our rights to be able to kill later.

This conversation is all part of the liberal agenda. They want to disarm us so that they can control us. I’m afraid if there is no revolution against this tyrannical government, guns will die out slowly. WE THE PEOPLE can’t let that happen; we have to be ready to kill now to protect our rights to be able to kill later. I’m a soldier in this war, and every time I hear about gun control I just become more entrenched in my position. That’s why I can’t understand why the left keeps wanting to have this conversation. This isn’t a conversation for me. Stop trying to have it. Stop treading on me. Can’t you see who you are dealing with?

Also check out: The ABCs of Gun Culture.