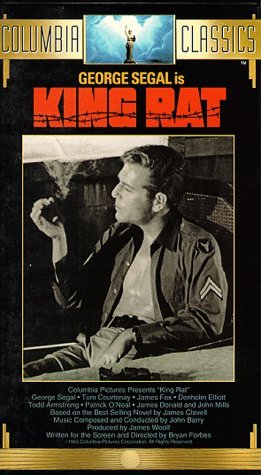 A resourceful Corporal King is stuck in a Malaysian P.O.W. camp during WW2. He makes the best of things , using brains, bribery and larceny.

In wartime, it is not always the highest ranked individuals that run the show. Oftentimes, like with Ex-PFC Wintergreen and Corporal Milo Minderbinder in Heller’s masterpiece Catch-22, it is the most cunning and resourceful who are in charge. George Segal stars in his best performance ever in writer/director Bryan Forbes’s 1965 adaptation of James Clavell’s WW2 novel.

King Rat is yet another unique movie about the horrors of a prisoner of war camp during WW2. Although this movie takes place wholly in the prisoner of war camp, it is not your typical war movie, or P.O.W. movie. It is a tale about suffering in horrific conditions, but also one about humanity and ingenuity. In The Great Escape, you had Hendley (James Garner) as the “Scrounger”, but he was a two-bit piker compared to Corporal King. Also, King Rat was a much superior movie to the star-studded and sanitized The Great Escape. If you’ve read the book, I’m sure you will agree.

Like all other Japanese managed camps, the Changi camp outside of Singapore was a grim hell-hole as vividly displayed in this black & white film. The prisoners are filthy, sweaty, emaciated and living in total squalor with the exception of one soldier, Corporal King. King was the ultimate wheeler-dealer entrepreneur, and did business with the locals, the Japanese, and the enlisted men and officers in the camp. He was well fed, had clean clothes, money and cigarettes, while the rest of the prisoners were one step away from the grave.

His suspected shenanigans did not go unnoticed, especially by the Provost Officer Grey (Tim Courtenay). He constantly tries to harass King, who was an American corporal, and to catch him in illegal activity or with contraband. King was the ultimate dealer and con-man, so he was way too slick for Grey. Besides, most of the camp, including the top officers were in cahoots with King, to one extent or another. Maybe King Rat is not a villain at all; to the contrary, perhaps he is actually responsible for the almost impossible camp conditions being better, not worse. You be the judge.

I am not going to delve into the plot of this movie much, if at all. This is just too splendid a movie for me to risk spoiling anything. The acting in this movie is top-rate, especially from George Segal and the British officer Marlowe (James Fox) who he befriends at the camp. Their relationship is central focus of the story, and since the movie was made in 1965, we can only conjecture the depth of this relationship. This was Fox’s debut and he is just incredible in his part of the British officer. Bryan Forbes is masterful in his use and development of the scores of minor players in this movie. His technique reminds me a lot of what the Coen Brothers pull off in many of their movies.

King Rat is a movie about war, morality, class division, ingenuity, corruption, as well as a stark view of a market economy vs. a strictly regulated one. I mean, what could possibly be more regulated than a P.O.W. camp, but as we well know, within prison economies, creativity flourishes. And with this creativity and power, corruption is inevitable.

King Rat ends up being much more than a war movie or even a prisoner of war video. It is a movie about relationships, morality and social order. King Rat’s character is a dazzling showcasing of greed, ruthlessness and incredible compassion and loyalty. At times the movie is ridiculously hilarious, and at other times it is heart-breathtakingly depressing and difficult to watch.

Many reviewers have expressed disappointment in the last 15 minutes of the movie. I could not disagree any more. With the war over and the liberation of the prisoners imminent, we experience a somber and starkly realistic “Lord of the Flies” moment as the prisoners are shocked and zombified by the appearance of “normal” soldiers. Nothing will ever be the same and the viewers are left to wonder the ultimate fate and judgment of King Rat. Was he a hero or a villain?

10.0/10.0 With The Goatesian Rating of Better Than The Great Escape

Quotes and One-Liners from King Rat: