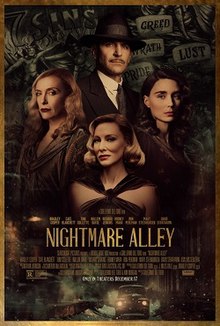 When you watch films by certain directors, you come to expect certain things. If you watch Quentin Tarantino, you expect the movie to explode into a curse-filled bloodbath. If you watch Roland Emmerich, you know the world is ending somehow. If you watch M. Night Shyamalan, you’re know you’re getting a twist and probably spending two hours of life your life that you’ll never get back. Then, there’s Guillermo del Toro – with him, you expect creatures or something supernatural. And with the title Nightmare Alley, this film has to be stuffed full of creatures that will haunt your dreams, right?

(SPOILER ALERT – Can you guess where this is going?)

Stan Carlisle (Bradley Cooper) has issues. It’s the middle of the Great Depression, he’s just dragged a body into a hole in the floor of a house and set it on fire, and he’s dressed like Indiana Jones. This last one is more an issue for the audience than for Stan because we see Stan for the first time in full, and this immediately suggests Stan is a hero about to tame some lions. Spoiler – neither of those things happens.

After Stan finishes smoking a cigarette, he makes his way to a carnival that is nine parts freak show and one part geek show. What is a geek you ask? Good question. Clem Hoately (Willem Dafoe), the carnival talker, will go into great detail explaining how a geek is actually made, but the short answer is a guy they’ve tortured to the point that he will bite the head off a chicken. This is what passes for entertainment in 1939 and whether or not customers believe the geek is a real chicken-vampire (or some other supernatural creature) is up for debate. Just kidding…they absolutely believe it.

In fact, the customers believe everything they see at the carnival despite everything at the carnival being a barely disguised con. There are mentalists Pete (David Strathairn) and Zeena (Toni Collette) convincing people they can read minds, there is big strongman Bruno (Ron Perlman) and little-strongman Brofo (Linden Proco) convincing people they can lift heavy stuff, there is a snake man and a bearded woman, there are games that clearly cannot be won, and there is even Molly (Rooney Mara) convincing people she can withstand being electrocuted by touching two Tesla balls. What catches the eye of Stan are Molly and all of the gullible idiots forking over what little money they have to be entertained. ‘Merica baby!

For the first few minutes of the film, Stan literally doesn’t speak a word. He wanders around the carnival when he first arrives, happens into the geek tent, leaves the tent before paying the chicken-head surcharge, is confronted by Bruno, Brofo, and Clem about what he’s doing there, is offered a job for the day, then offered a job staying on as a maintenance man. Eventually, Stan starts asking questions and learning more about the various carnies, including the geek (from Clem). At this point, we get the one instance of the entire film in which Stan is presented as worthy of sympathy – he offers the geek a cigarette. More on this in a minute.

When looking for a more civilized place for a bath, Stan goes into Zeena’s house where she is offering baths for a dime. Here he is introduced to mentalism and Pete’s debilitating drinking habit. Stan soon finds himself as an assistant to Zeema during her performances and convinces Pete to teach him their original act and how to cold-read people when the primary method (verbal cues from an assistant) is compromised. Everything we’ve seen up to this point is character building and setup for the second and third acts. More on this in a minute.

The final piece of this first act is Molly. Stan is clearly smitten with her and Molly is just a happy-go-lucky, innocent girl floating around the carnival with a dimpled smile on her face, occasionally letting electricity flow through her body. Stan woos her and convinces her to marry him, move to a big city, and become his assistant in a mentalist act.

This first act is exceptionally well done. It establishes the characters, develops an extremely interesting setting, and there are little details that seem to promise us that something supernatural is going to happen soon. It’s the kind of scene that should end with “if you liked that, you’re going to love what happens next.” Instead, it ends with “two years later in Buffalo.”

You know all those interesting characters at the carnival? Forget all them because they vanish from the film. You know the carnival? Not going back there again. You know how Stan seems kind of sympathetic, but definitely mysterious, and who did Stan set on fire at the beginning of the film and why? Well, he’s neither of those things and that person he burned doesn’t matter to the plot. That first act even featured an ominous warning to Stan from Pete not to believe his own con. Naturally, we expect this to happen, but not only does it not happen, the movie goes out of its way to make sure Stan reminds us time after time that it’s all a con. Worst of all, there’s no creature. There’s nothing supernatural.

The latter half of the film is essentially a completely new story. One night during their act, Stan is challenged by Dr. Lilith Ritter (Cate Blanchett) and Stan pulls off a cold-read to thwart her attempts to expose him as a fraud. He finds out she is a psychologist and that she has information on some very wealthy people (including characters played by Mary Steenburgen and Richard Jenkins). Stan hatches a plan to con these people by tricking them into thinking he can talk to dead people. The film completely turns the audience against Stan at this point, but forgets to turn the audience for anyone else.

And that is the crux of the problem with this film. Del Toro is so busy trying to subvert our expectations that he forgets to write a compelling story or give us someone to root for. Stan only has that one moment early in the film, but that is quickly overshadowed by other deeds. Molly never gains any depth as a character and remains little more than a set piece to Stan and Del Toro. The carnies are literally abandoned, showing up briefly once more just to say hi (wish I was being sarcastic there). And all of the people we meet post-carnival are terrible people. And none of the early things said or done come back to complete the story. It’s almost like Del Toro and co-writer Kim Morgan each wrote half the movie, but didn’t tell each other what they wrote.

In the end, Nightmare Alley is hollow (as one person put it), not something I’d watch again (as another person put it), and an unfulfilled promise of some supernatural creatures, dammit (as I put it)! It is a very beautiful movie for those of you who like noir, Cate Blanchett and Bradley Cooper are really good, and, if you want to feel really good about yourself, you should be able to predict how the movie ends very early in the film (you won’t find many movies that telegraph an ending so blatantly as this one). But expectations are important and this film should have been much more carnival and much less Buffalo.

Rating: Ask for half your money back and where Del Toro is hiding the creatures.