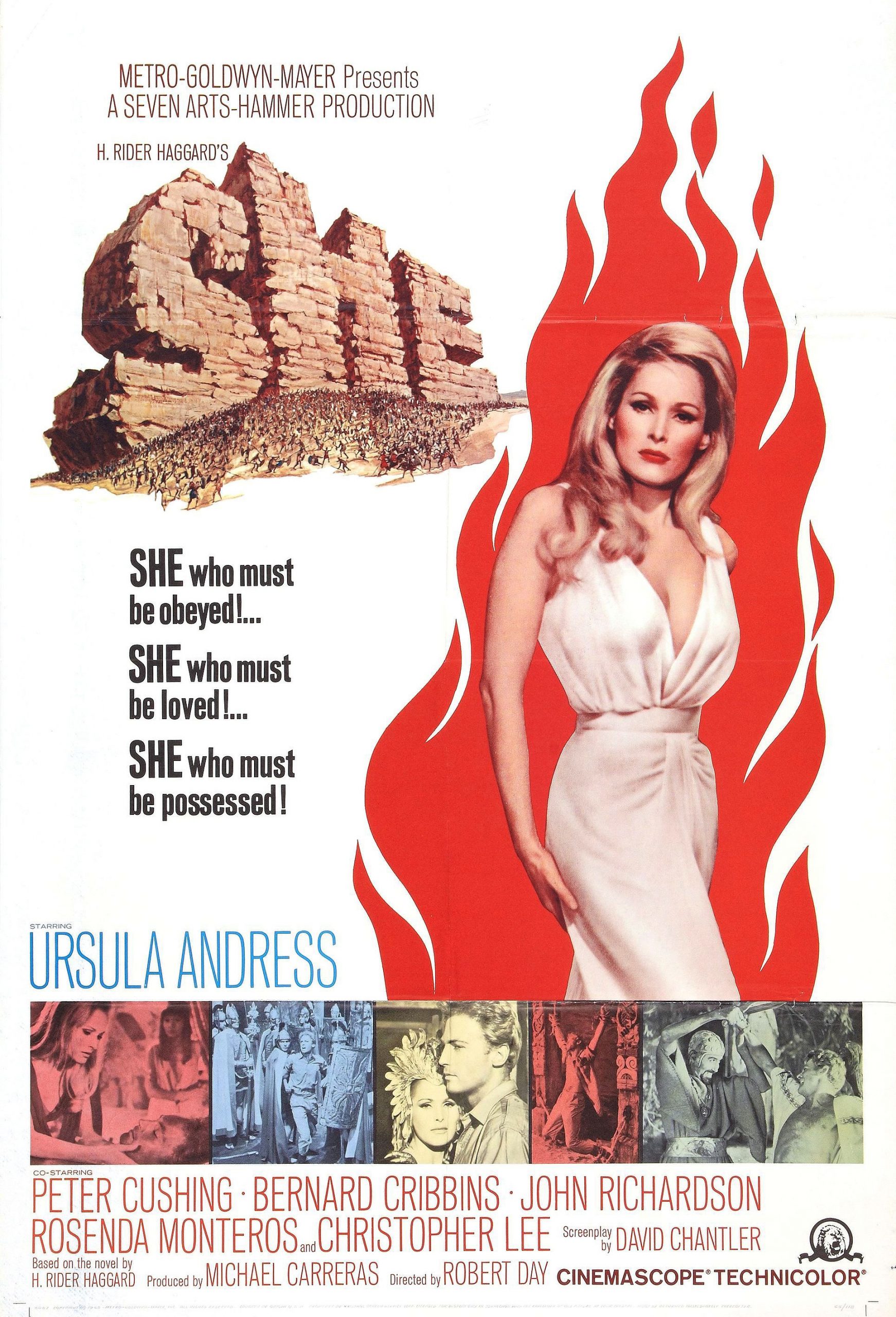 An English archaeologist and two companions stumble upon a lost city in East Africa. She is there.

Do you have a favorite little movie that somehow doesn’t get the recognition it deserves?

You know, a flick that’s pretty much always met with scorn, lukewarm reviews and general disdain.

Year after year you keep expecting the love to materialize, especially as there are so many filmgoers out there gushing over what can only be politely described as pieces of shit. Surely, one day, sooner or later, at least some of them will get round to taking an interest in your neglected gem.

Then it becomes a case of: What the fuck is wrong here? Why don’t these idiots get it? This movie is good. Not perfect or brilliant or epoch-defining, but good.

Perhaps your little fave is based on a thought-provoking idea. Maybe it’s charming or makes you laugh. Or perhaps you enjoy a couple of excellent sequences, a nice supporting turn, and some interesting camera angles.

Whatever the case, it provides a rewarding hundred minutes or so of entertainment as well as a comfortable sanctuary for you to snuggle into from time to time.

Well, folks, I’m putting forward Hammer’s She, a big international hit that somehow can’t even reach the lofty heights of 6 on IMDB.

I first came across this jewel during childhood and that might have something to do with the way its occasionally startling imagery has lodged in my head. Even so, this is more than a case of rose-tinted glasses. I’ve viewed it plenty of times since I’ve grown into a big, strong man and it never fails to hit the right spot.

For a start, it’s an uncompromising watch, managing to be both enchanting and brutal. This contradiction is captured in the clashing harmonies of James Bernard’s superb score. His lush, dreamy strings conjure up the exotic mystery and intense yearning at the heart of H. Rider Haggard’s legendary tale while the harsh, ominous horns brilliantly warn of the inherent dangers in pursuing such fantastic notions as lost cities and eternal life.

Three ex-army personnel sit in a Palestinian bar shortly after the First World War has ended, wondering what to do next. Leo (John Richardson) seems the most confused. “It’s a funny thing,” he says, “but during the desert fighting I was never more at peace.”

Moments later he’s been bopped over the head and wakes up to find himself face to face with the exotic, no, unearthly Ayesha (Ursula Andress). Clad in a flowing white gown with a loose mane of chestnut hair, she’s a ravishing picture of feminine beauty.

I mean (and I’ve thought long and hard about the following words) this is one classy bird.

She tells Leo he must embark on a long, dangerous journey across the Desert of the Lost Souls and the Mountains of the Moon if he ever wants to see her again. “At its end,” she says, “everything you desire will be yours. Power, riches, glory…”

Understandably, Leo’s up for it and it’s not long before he’s convinced Professor Holly (Peter Cushing), who senses a chance to write his name into archeological history, as well as his drily funny manservant Job (Bernard Cribbins).

The well-paced opening twenty minutes set everything up nicely. We understand it’s a quest movie so it’s no surprise their epic desert trek almost immediately goes awry. As things get tougher, Leo is tormented by shimmering visions of Ayesha’s open arms promising an eternal embrace, visions that take on an increasingly hallucinatory quality after their water runs out.

This is a lavish movie with a fair bit of outdoor filming, as well as excellent sets and costumes. One of its strengths is its ability to stage scenes of eye-catching spectacle, such as a writhing, straw-haired witch doctor getting ready to sacrifice Leo to the gods as he’s strung Kong-like between two wooden posts.

Then there’s the dramatic entrance to the fabled city of Kuma along a narrow cliff pathway that’s positioned between the feet of a gigantic statue of a spear-holding warrior. The city’s interior is also convincing, especially Ayesha’s ceremonial room in a gigantic cavern with its shadows flickering on the walls, echoing footsteps, graceful handmaidens, stern Roman guards and, of course, it’s terrifying, magma-filled execution pit. Put it all together and a sense of history and isolated, unbroken tradition is remarkably well conveyed.

Ayesha is a great character. She might be an immortal queen, but she’s also a colossal bitch, revealed to be a spiteful, two-thousand-year-old sexually jealous killer. Time hasn’t mellowed her one jot. In fact, her absolute power (and her fondness for public executions over the millennia) has only made her worse. I’d say she’s one of the most beautiful monsters in 20th Century cinema. Or as Job laconically observes when he gets a first glimpse of her: “Blimey, they just don’t make ’em like that anymore.”

Now no one’s going to argue Andress is a great actress, but she’s perfectly cast here and I do like the regal, slightly stiff quality she brings to her performance. (Apparently, it was the first time Hammer had built a movie around a female star). She also nails some of her lines, especially the moment fifteen erring slaves are brought before her.

“I am She Who Must Be Obeyed,” she tells them with a discernible trace of steel in her voice. “There is only one penalty for those who do not choose to obey. A lesson in obedience.”

Then they’re chucked into the pit of fire as she rises to her feet to get a better look at their last moments. Cripes, it must be her time of the month or something.

She also has a creepy quality. There’s the collective submissive moaning of the aforementioned doomed slaves, as well as the way Ayesha keeps her lover’s murdered corpse for two millennia in an oblong sarcophagus. Meanwhile, her ambitious High Priest Billali (Christopher Lee) is acutely aware of his mortal destiny, having to pray before his predecessors, a bunch of mummified skeletons kept in alcoves on taunting display.

Plus, the cast is great (I always love seeing a bearded Cushing and the bowler-hatted Cribbins letting it all hang out on the dance floor of a racy belly dancing bar). And apart from everything else, this sumptuous fantasy builds to an action-packed, haunting climax while tackling (with a Christ-like tinge) some meaty themes like reincarnation, the seductive possibility of immortality and the corrupting nature of power. It reaches for the stars with its tantalizing imagination yet doesn’t shy away from the heartbreaking ugliness of having your beautiful daughter turned into a handful of dust.

So why the hell don’t people like this movie?

Nearly sixty years after its release, it seems I’m among only a handful of sorry fuckers who rates it. Reviews remain uniformly unenthusiastic. For example, here’s The New York Times: “It lacks style, sophistication, humor, sense, and above all, a reason for being.”

Now I know the intrinsic quality of a piece of art can’t be proved and the next guy’s opinion is worth just as much as mine, but… but… people who don’t like She are just wrong.

Christ, why can’t every film critic in the world be me?

Then we might get some proper bloody consensus around here.