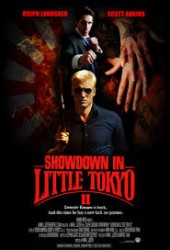 Ladies and Gentlemen, I would like to introduce you to the NEEEEWWW heavyweight, 80s Action, gayness champion of the woooorrrrrrld: Showdown in Little Tokyo!!!

Yes, it’s gayer than Red Heat… Where to begin? How about the bathhouse??? If someone out there doubts the gayness of these films, how to explain that this is the second one we’ve reviewed that has a bathhouse scene? No heterosexual genre should include bathhouses as key settings in 5% of it’s films. The bathhouse is where stars, Dolph and Brandon Lee choose to strike their Yakuza enemies, who are all wearing those thong/diaper things favored by sumo wrestlers. During the bathhouse brawl, one of the Yakuza breaks out, not a gun, not a sword, but a hose. Yes, a tube that squirts water, which he uses to soak Dolph. In case you missed the full gayness of what I’ve just described, I’ll reiterate. This is an “action film” in which buffed out men squirt each other with hoses, in a bathouse. Later Dolph kills a Yakuza by forcing the hose down his throat and drowning him. Paging Dr. Freud, Dr. Freud to the front desk please. Your patient is ready.

Over beer and food yesterday, Jonny and I discussed the fact that sometimes 80s Action films become so gay, they forget to include regular text to cover the gay subtext. This happens in Navy Seals when the commander asks Charlie Sheen if he’s close to the enemy. Sheen says, “If I was any closer, I’d be inside him.” What!? That doesn’t make any sense except as an expression of gay lust. But again, Showdown proves to be the champ. I almost don’t want to spoil the shock of this line by revealing it. Brandon Lee and Dolph are preparing for a shootout and Brandon says, “In case we don’t make it, I want to tell you, you have the biggest dick I’ve ever seen.” I swear to every imaginary man in the sky humanity has ever invented, I am not lying!

About ten minutes later, Dolph says of the bad guy, “I would like to cut off certain parts of his anatomy.” Then Brandon says, “Man, you’ve got a fixation.” Unfortunately, Dolph doesn’t respond with, “I’ve got a fixation?” I’ve got a fixation. You’re the one who decided that his last words should be about my cock! I was just gonna chop of his ears and his nose, man.” This might be the best time to mention that I only saw the last half hour of this film on HBO. The “fixation” may well have been a reference to earlier cock chat by Dolph. I’m considering buying the DVD online for $5 and then, possibly adding to the review, but even 30 minutes of Showdown out-gays any other 80s Action film.

Like the other Dolph film we reviewed, The Punisher, this one features Dolph being stripped down, stretched out and tortured by an evil Japanese torture doctor. Again, this can’t be an anomaly. Two Dolph films and two films in which Dolph is stripped, racked and tortured by an Asian man. I’d say that’s statistically significant.

This film has quite a bit of heterosexual content as well. Tia Carrere costars, is briefly nude (actually a body double) and has sex with Dolph. Not only that, in a serious breech of 80s Action protocol, she is not murdered as punishment for tainting Dolph’s giant cock with her vile, vaginal fluids. My theory is that this film is so secure in its homosexuality that it doesn’t need to be militantly anti-heterosexual, as are so many other 80s Action films. This is 1991 (still the 80s as far as this Guide is concerned.) Growing tolerance of homosexuality has allowed this film to set one foot out of the closet and to assume a less angry tone. Even so, the love scene between Tia and Dolph is almost as unconvincing as the one in Lucas’s pedo-epic, Attack of the Clones.

Again, I only saw about 1/3 of this film, but the tally still reached 38. Very nice.

Dolph and Brandon are being electrocuted by the Japanese torture doctor. Dolph breaks free and throws the doctor onto Brandon’s rack, which apparently has enough voltage to kill the doctor without harming Brandon. Anyway, the doctor. dies of electrocution and Dolph says, “well done.” Would have made much more sense for Brandon to say it, but still funny.

Earlier in the film, Dolph tells Tia to shoot anything she sees or hears while he’s gone. She says, “What about you?” He says, “You won’t hear me coming.” After they get it on, Tia says, “this time, I heard you coming.”

Dolph takes on the head Yakuza in a samurai sword fight, eventually impaling the bad guy on one of those wheels o’ fireworks. The bad guy screams and spins until catching fire, screaming and spinning some more and then dying.

Not much. Well, the whole drugs = Satan thing is pretty dumb, but it’s such a cliché and so ingrained that I barely noticed it. It’s worth turning the city of LA into a war zone and risking lives, both innocent and criminal, to keep drugs out of the hands of college kids, because if they take drugs, the might have S-E-X. It’s the one principle that is so retarded it can be unreservedly embraced by both Republicans and Democrats. OK, it’s one of many such principles, but I don’t want to go on a rant.

I just went ahead and ordered the DVD. I think this might be the last great 80s Action film. Apart from failing to espouse fascism, it’s a grand slam. As far as filmmaking, acting and so forth, it’s about 75th percentile for the genre. This is certainly a better cast than you’ll find in any Chuck Norris flick. I kept wondering why Lucy Lui is the famous Asian chick, rather than the far more attractive Tia. Anyway, I had a great time watching this film.

Dolph is fucking HUGE! Cock aside, I never realized how huge until I saw him on the rack next to Bradon Lee. Lee was ripped, but he looked like a little girl next to Dolph. I used to be convinced that Steven Segal would win the battle royal among 80s Action stars, but now I’m thinking Dolph.