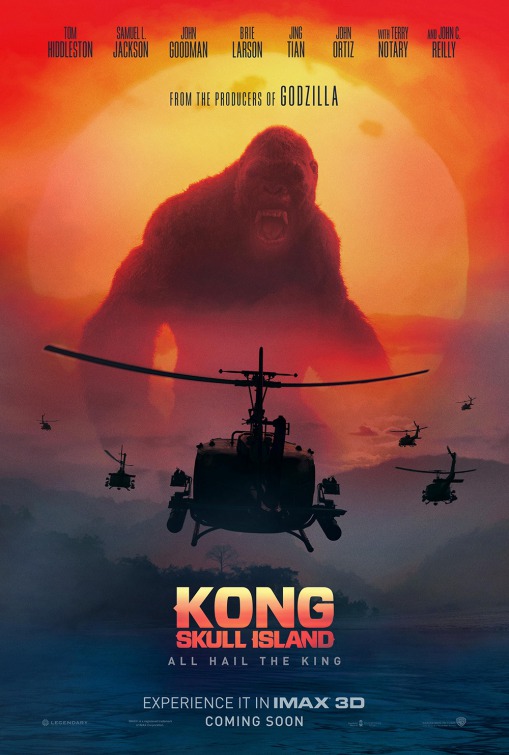 After nearly forty years living on Earth, it’s not often that movies surprise me, but when they do it’s like I’m eight years old at Christmas again. When you’re an adult opening presents, you almost always know what’s inside that wrapping paper, but when you’re eight, that package could contain anything from an action figure to a puppy to socks. I never said the surprise was always good, but the point is that you always expected something awesome. Three decades later, after life has pretty much stomped all over that innocent optimism, every present comes with a healthy dose of skepticism and you’re pretty sure it’s not going to be awesome. In fact, you might even be hoping for those socks. When a movie like Kong: Skull Island shows up, I can hear the eight-year old inside me screaming in delight and my thirty-eight year old brain has to put him in timeout. After watching Skull Island, all I can hear in my head now is “neener, neener – I told you so” and I couldn’t be more surprised.

I went into Skull Island with sub-basement level expectations, mostly because the trailer I saw for it featured John Goodman telling us how the nuclear tests in the 1950s weren’t tests, but that they were trying to kill something. On my Movie Fixers podcast, we covered the 2014 reboot of Godzilla last month, so it was fresh in my head that Godzilla featured this exact same exclamation. Sometimes I’m a little slow, so it didn’t occur to me before watching Skull Island that it wasn’t just ripping off Godzilla. My only thought was “this is going to be a bad movie.” And can you blame me? Godzilla was a disappointment, as was the last King Kong movie (2005). The only thing I wanted out of Skull Island was for the entire movie to take place on the island. Well, wish granted…and that’s not all.

How an eight-year old reacts to socks as presents.

As it turns out, Skull Island is a companion movie to Godzilla and exists in the same cinematic universe. That realization came when the term Massive Unidentified Terrestrial Object (MUTO) was uttered, which is the very same term used to describe the monsters in Godzilla. That’s also when I realized that nuke test line was actually referencing nuking Godzilla, not King Kong, as I had assumed. Yeah, I’m as surprised by you that someone actually put some real thought into tying these two movies. That realization allowed me to forget about my expectations and enjoy a movie that turned out to be everything that Godzilla should have been.

Besides the nuke and MUTO references, the other tie-in to Godzilla is the Monarch program, headed by Bill Randa (John Goodman). Randa wants to prove the existence of MUTOs and, with the help of his assistant Houston Brooks (Corey Hawkins), secures funding for an expedition to a recently discovered island. Also, its 1973, so we get plenty of Vietnam references as well as some great music. Then, like all quest movies, an expedition team is assembled featuring tracker and former SAS soldier James Conrad (Tom Hiddleston), war photojournalist Mason Weaver (Brie Larson), biologist San Lin (Jing Tian), random bureaucrat Victor Nieves (John Ortiz), and a whole lot of soldiers led by Lieutenant Colonel Preston Packard (Samuel L. Jackson). If you want to know any more about any of these characters, you will be disappointed because this movie isn’t about them, at least not directly. The only thing you need to worry about is who is going to survive and the method of death for those that don’t. I promise you will not guess most of that and you will not be disappointed.

This is what you came for.

Also, don’t worry about the plot because there really isn’t much of one. This is very much a survival movie, so the plot is “get to the chopper.” I’m not kidding, they actually have three days from the time they are dropped on the island to get to the extraction point where helicopters will pick them up. Unfortunately for them, Randa’s plan starts and ends with dropping a bunch of bombs on the island to flush out a MUTO and it’s literally the first thing they do when they get there. So, all three days are loaded with a variety of monsters, including Kong, chasing and murdering people and that’s why I had so much fun watching this movie.

Unlike Godzilla, Skull Island doesn’t try to hide its titular character. We see him right off the bat, then get oodles of screen time with Kong killing people and monsters. It’s glorious and is really the whole reason to see this movie. But there are two other components that make this film worth it. The first are the subtle and clever homages to classic King Kong. Aircraft swarming around Kong while he bats them from the sky, Kong escaping from chains, and even the damsel in distress, which somehow doesn’t come off as absurd. Brie Larson is smokin’ hot and you’d protect her too if you were Kong. The second is John C. Reilly, who steals this movie from everyone but Kong. Reilly plays Hank Marlow, a WWII pilot who crashed on the island in 1944 and inexplicably survived for twenty-nine years. He is the only character besides Kong with more than one dimension (seriously, Hiddleston and Larson are there to look hot, Jackson is doing a caricature of himself, and I’m not sure Tian said anything during the entire film) and is the one character you will be rooting for to survive the ordeal. He adds the entirety of the comic relief and saves the film from taking itself too seriously, which Godzilla really could have used.

What I’m really trying to say is that this movie is a movie for me. I would never defend it as being a good movie, but it’s an incredibly entertaining movie that delivers exactly what it needed to. Fantastic visuals, great fight scenes, and some monsters that will haunt your dreams (my favorite is the spider). And, as I eluded to earlier, Skull Island is the second entry in a franchise that will assuredly include more films featuring more monsters. For now, I’m just happy I was wrong about this movie because, in the end, I got a present I wasn’t expecting and it was awesome.

Rating: Do not ask for any money back as this film was everything you would want in a monster flick.