Home / Featured Posts / War for the Planet of the Apes

War for the Planet of the Apes War for the Planet of the Apes

There is no war, only the moral compass of the Monkeys

War for the Planet of the Apes. l’ll have to say that I looked forward to this movie with a fair amount of expectation. Why? Nothing else has really excited me this year since Get Out. Alien:Covenant was quite good, but the fanboy crying about it virtually ruined it for me. Free Fire was fun, but hardly a blockbuster, and Moonlight was a predictable yawner, stealing an Oscar from the rightful best movie, La La Land. Baby Driver? Kevin said it all in his review. I won’t mention the movies that I did not see, such as Logan and Wonder Woman. Oh, I mentioned them, didn’t I? Have I posted enough links? Good, maybe that will make up for the inexplicable product placement of the Coca’Cola truck in the movie.

Here we have the big hit of the summer, The War for the Planet of the Apes. The cinematography was breath-taking, the costumes magnificent and the landscape was almost too gorgeous. [EDIT: Yeah, Serkis, kiss, kiss, kiss, he was great] What could possibly be wrong with this movie that pulled in 56 million dollars the first weekend? Two words: Almost everything. Now, let me say this about that. First, I enjoyed the movie. It was beautiful and quite watchable, so what was the problem? For one thing, the good ole PG-13. More about this later. No, not later, lets talk about this now.

OMG, PG-13! Apes, chimps, and other primates (including humans) can be vicious and violent. I’ve seen documentaries on TV where a baboon nonchalantly shreds and eats a baby antelope ALIVE, like a piece of fruit, and in front of its mother. Chimps in the wild will execute gang-like rages (only worse) and terrorize, murder and rip to shreds other monkeys just for the sheer hell of it. Then they eat them, and like I said, sometimes alive. 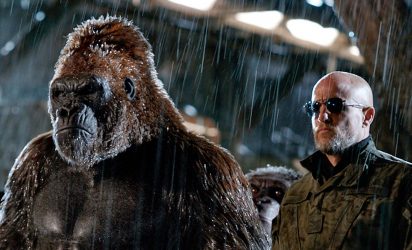 For being in a War Zone, the War for the Planet of the Apes monkeys were cruising down Leave It To Beaver Street. Yeah, I know, they evolved. These monkeys had the high-road and the high horse to the point of absurdity. Only Caesar makes a pretense of going medieval on the murderous and evil humans, personified by The Colonel Woody Harrelson, but he wimps out at the last moment. And yeah, the Magical Negro has been replaced by the Magical Monkey. I mean, really. Applause. Monkey good, Men, bad. Case closed.

War? What fucking war? This is what we didn’t see in the movie

From my perspective, this was the biggest shortfall in the movie. There was no war, there was barely a skirmish that was consummated by a totally random and massive avalanche. There were a couple of exploding helicopters and some missiles and shots fired, but hardly a war. A final showdown between the warring human factions was downright pathetic. The avalanche at the end was clearly interjected to show the superior scampering and flexibility of the monkeys, who scurried up the trees to avoid the deadly fall of snow and ice. What about The Girl? Oh, boy, that girl. For some unknown reason the small party of monkeys, who are dispatched on the most important and consequential mission of their monkey lives, seem compelled, for no apparent reason at all, to discover, adopt and let tag along this cute-mute kid [and her little doll, too], . This kid seems to exhibit no effects at all from the deadly human virus that immediately devastates the bad-assed Colonel Woody Harrelson. I don’t know why this kid was in the entire movie, wandering around, especially totally undetected in the middle of a war zone! I guess she was to represent the token human who was not totally evil. Who wants to even think about her role in preserving and upgrading humanity after the victorious monkeys descended into Monkey Valley at the end of the movie. Worst random character insertion ever! The Message? If you have a nose that looks like a deviated rectum, humans will probably hate you and try to kill you. Also, this guy (below) was really creepy, all I could think of was Pedo-Monkey. Caesar, the main character, was one big bore for 140 minutes. I thought that I enjoyed this movie, but the more I think about it, the more I think that I have been duped along with thousands of other people. It was like cotton-candy, looks good, tastes good, but ultimately all fluff and no substance.