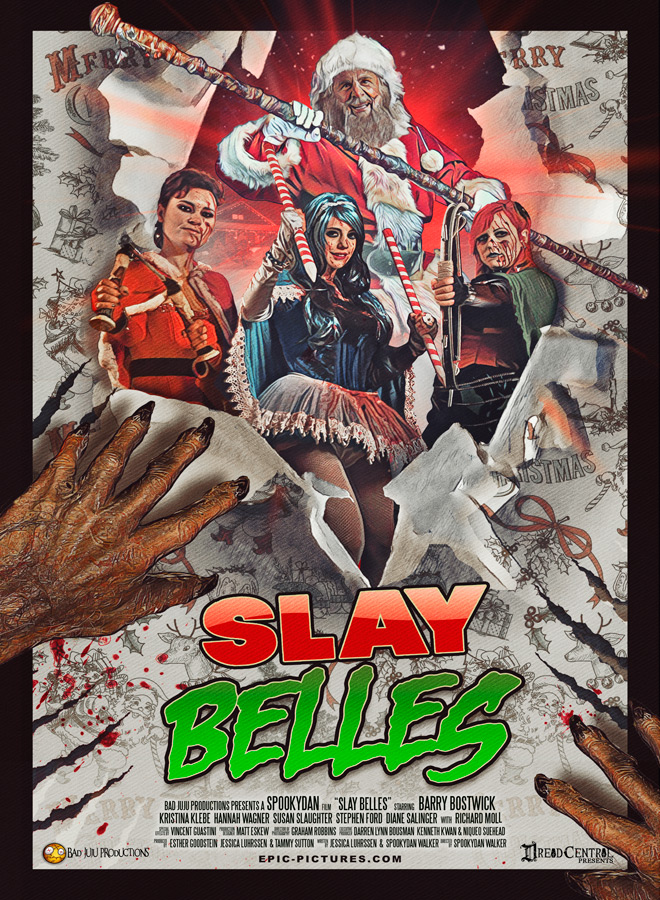 Three sexy cosplaying women battle the evil Krampus in order to save Christmas, and the world!

Slay Belles is a Christmas horror comedy that features three young women who are YouTubers. They are also a trio of ditzy cosplayers, anime freaks and free-spirited Listers. [EDITOR’S NOTE: A Lister can be defined as someone who is most likely on the list of the 10 biggest ho’s in high school] Don’t let that put you off, as these empowered women are sexy as hell and totally fearless.

On their YouTube channel these Urban Explorers are called The Adventure Girls and they explore abandoned malls or other Americana, make videos, and always take away a souvenir. Today’s target? A long closed and mostly abandoned place called Santa Land, which is a small theme park outside of a remote town in California. Quite uninvited, they invoke their YouTube Channel privilege and are willing trespassers at this creepy park. Plus, it’s Christmas Eve! What could possibly go wrong?

These fun-loving girls do their social media thing at Santa Land, but you just know something is coming. They had already received a subtle warning from Forest Ranger Officer Anderson about some bear attacks in the area. This happened when they made a pit stop at a seedy and scruffy bar run by an even scruffier Cherry (Diane Salinger). Something was not quite right with her as the first complete sentence out of Cherry’s mouth was “Fuck Christmas”.

Well, that is quite enough of a rambling backstory, let’s get on to the lore, the huge bouncing tits in tight costumes, and the killing and the gore. You see, Santa Land is more than a run-down relic of an earlier, happier time. Santa Land contains Santa himself, played perfectly by Barry Bostwick of Rocky Horror fame, and his evil brother, none other than Krampus!

Oh boy, and what a Krampus we have. There are many Krampus movies out there, which range from competently done films like Krampus, to totally horrible and unwatchable efforts like Krampus: The Christmas Devil. Fortunately, this is one of the better Krampus Christmas movies. Krampus is the anti-Santa, the inverse Santa and according to the legend, he bites the heads off of kidnapped kids before sending them to Hell. This Krampus is even worse. He and his mystery partner (No spoiling here!) are out not only to separate kid’s heads from their bodies, but to actually destroy Christmas forever. Christmas must be saved!

So what about this movie? It is fast-paced and the eye-candy, (human and otherwise), is great, plus the script is clever and crisp. There are one-liners and innuendos galore and the camera is never far from the cleavage. Even as silly as it is at times, it would be very difficult for any hard-core cheesy Christmas Movie lover to dislike this one. There is not any unnecessary gore, even as terrifying as the Krampus is, doing his very evil work.

Is it a near-masterpiece of Christmas slash and gore like Mercy Christmas? Oh, of course not, but how many of these horror/comedy movies are? What it is, is a lot of fun with brief, but very clever reveals and plot twists that will have you smiling, laughing and glad that you gave this one a look.

Some Naughty Quotes and One-Liners

7.5/10.0 With the Goatesians Seal of Approval for Christmas Krampus.