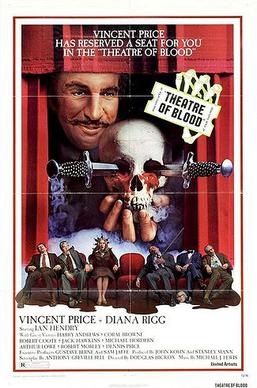 Do you have a mantra that helps you get through life’s darker moments?

You know, something that enables you to cope with the searing knowledge that dreams don’t come true and you’ll instead have to settle for second, third or fourth best as you crawl unfulfilled toward your grave.

I cling to the insight of that great philosopher Adam Ant: Ridicule is nothing to be scared of. For many a year it’s enabled me to bounce back from the myriad failures of my working life, to disregard all my creative ambitions turning into dust, and to quietly ignore the disappointed look in a lover’s eye whenever I’ve yet again delivered three thrusts and a squirt.

Ah, but some people can’t handle the merest whiff of criticism, let alone ridicule. Artists, for instance. Well-known for both their sensitive nature and monstrous need for praise, these frequently tortured souls often end up choking on their own resentment while drinking themselves to death.

Edward Lionheart (Price) is one such man, a Shakespeare-obsessed thespian who believes himself to be the world’s greatest living actor. But in the eyes of a smug group of influential London critics, a group he simply can’t win over, he’s little more than a ham sandwich. “You begin to resent an actor if you always have to give him bad notices,” one of them blithely says, perfectly capturing a critic’s self-important lack of empathy.

Lionheart can’t handle this denial of his genius, snapping after yet another snub for Best Actor at their annual awards ceremony. He confronts them at their cozy after party, an unwise move that results in more mockery and a dramatic swan dive into the Thames.

Except, of course, his body is never found…

In one of Theater of Blood’s many imaginative touches, Lionheart is rescued by a bunch of meth-swilling vagrants before setting up shop in an abandoned theater. The permanently pissed hobos become his willing executioners as he plots Bard-inspired revenge. To Lionheart, his critics are talentless fools who spew vitriol on the creative efforts of others because they lack the ability to create themselves. There might be some truth in this, but it’s also clear Lionheart lacks insight into his own actions. He never once questions why he so desperately needs their approval, deludes himself into thinking he’s ‘punishing’ rather than killing, and doesn’t hesitate when it comes to dispatching innocent life, such as the very funny demise of a pair of beloved dogs.

This is a fun romp, not quite in the same horror-comedy class as American Werewolf and Re-Animator, but immeasurably aided by a bunch of terrific British character actors who are drowned, electrocuted and decapitated at Lionheart’s whim. Price is obviously having a whale of a time, endlessly swapping disguises and spouting Shakespeare while going about his grisly business. At one point he’s even a gay hairdresser called Butch, although I’m not sure which play that’s from. It’s one of Price’s best performances, his rich, tremulous voice and camp humor perfectly suited to the hokey, tongue-in-cheek material.

Dave Franklin has also written a novel about murdering critics, a move that suggests he lacks originality. Oh well, ridicule is nothing to be scared of.