Home / Reviews / Movies / Classics / The Bridge On The River Kwai

The Bridge On The River Kwai 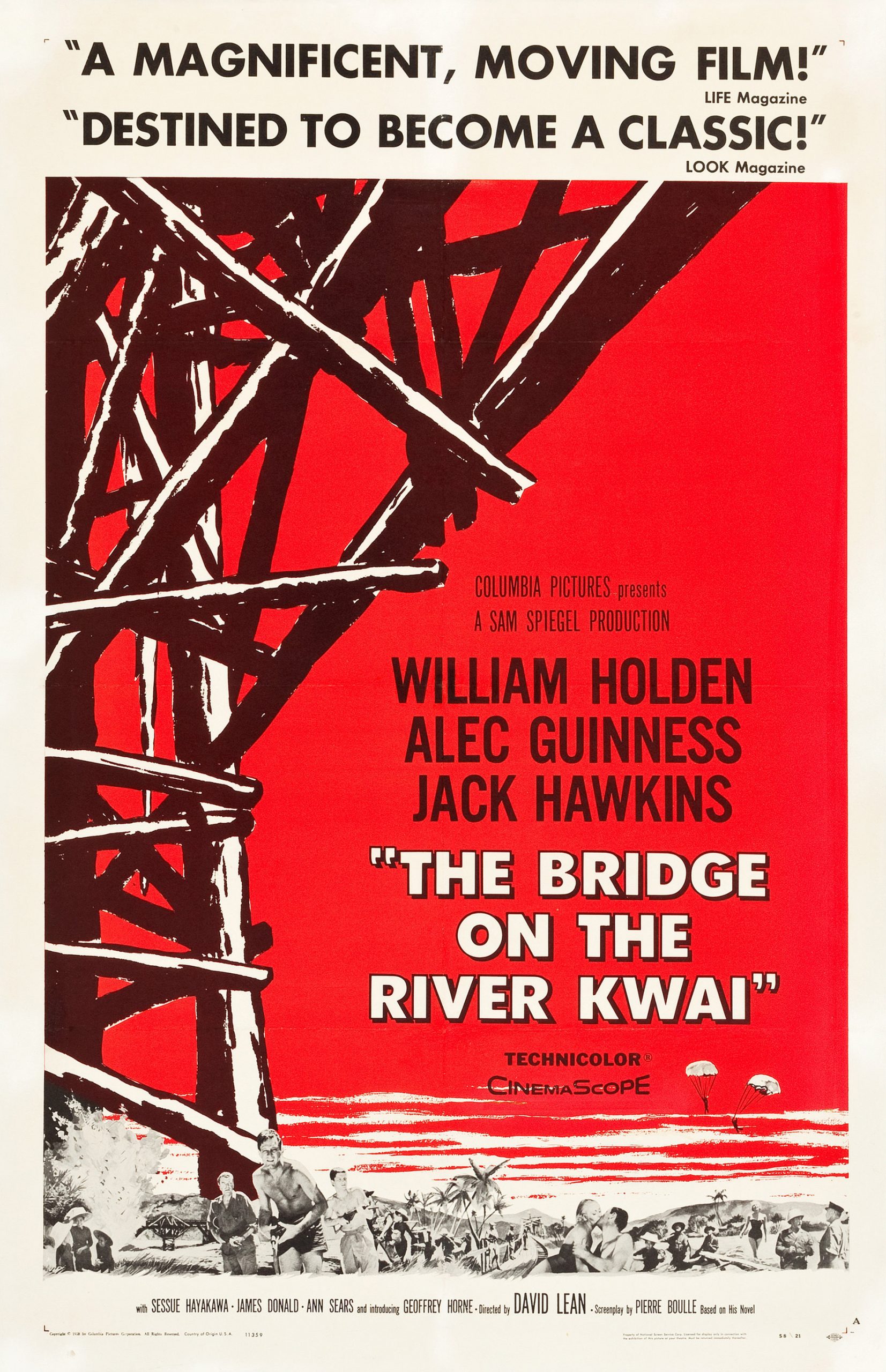 The Bridge On The River Kwai

British POW’s are forced to build a bridge for their Japanese captors.

There are war movies and there are more war movies, but I do not hesitate to state that The Bridge on the River Kwai is as unique as it is excellent. Within the huge category of war movies, we have many about prisoners of war, and the inevitable nightmares and madness of horrific situations brought on by the unpleasantness of war. These movies include Rambo, The Great Escape, The Deer Hunter and a myriad of others, but I really like off the track ones like Breaker Morant, King Rat (a magnificent and underrated film), and of course, the timeless classic The Bridge on the River Kwai.

This film was produced 5 years before the epic masterpiece Lawrence Of Arabia. This time David Lean takes us into WW2 and the sweltering and deadly Pacific Theater of war. The British company that enters the prison camp is sweaty, dirty, bloody and exhausted, but they march as smartly as if they were on parade in front of The Queen. Whistling in defiance the Colonel Bogey March, they enter the prison camp. In spite of their travails, this group of unbowed soldiers are disciplined and anything but demoralized. They are led by the great Alec Guinness as their commander, Colonel Nicholson.

Colonel Nicholson is strictly by the military book, and tensions rise immediately as he butts heads with Colonel Saito, who has a deadline and a bridge to build. The prisoners, of course, will be conscripted as slave labor to build a vital railway bridge, linking SE Asia to India. Failure is not an option in Japanese military culture, and the project is way behind. Everyone must work, but Nicholson refuses to order his officers to work, citing The Geneva Convention.

Colonel Saito blows a gasket and invokes all sorts of torture and threats to “convince” the recalcitrant Colonel to order his officers to work. Nicholson will not bend, and eventually the reluctant Saito has to give in, because without the cooperation of the English officers and engineers, the bridge will never be built, and he will have to commit hara-kiri. His Japanese engineers are apparently incompetent and had even chosen a nonviable location for the critical bridge.

This is where the story really begins, where principle meets utter madness, with brilliant performances by Alec Guinness, William Holden, Sessue Hayakawa and Jack Hawkins as Major Warden. Baking in the torture chamber called “the oven” did not break the Colonel’s will, but it may have somewhat poached his reasoning power as he became obsessed with building a proper bridge, even if he was building it for his enemy captors.

While the bridge is being built, long time and very reluctant American resident of the camp, Commander Shears (William Holden) escapes the camp and miraculously makes it to the safety of a military hospital base in Ceylon. Here is where the spoilers end, and if you haven’t seen this fine movie then prepare yourself for great irony and a devastating climax.

The Bridge On The River Kwai was a controversial movie, and most of the controversy was based in its historical accuracy. The movie was based on a novel written by a Frenchman, Pierre Boulle. David Lean was unhappy with the first two screenwriting efforts, so he decided to go to Burma and write the entire script himself. He was helped by two blacklisted writers, Michael Wilson and Carl Foreman, so the credit actually went to Boulle, who won an Oscar, in spite of having nothing to do with the screenwriting .

Be that as it may, I cannot be distracted from the excellence of this classic that pulled down 7 Academy Awards. There can be no escape from the stark brutality of a prisoner camp in a most inhospitable and unforgiving jungle.

What this film shockingly points out is the utter futility of war and the wastefulness of stubborn heroes. All goals were fulfilled in this film, but at what terrible cost? We have indeed great dialogue in this movie, but it is reinforced greatly by what is seen. Dialogue alone can be boring, no matter how great, but what we saw, in gorgeous cinema-scope were the huge landscape shots with brilliant composition. In spite of this being a gritty war film, it was breath-takingly beautiful as well, as it was shot on location in Ceylon.

Ultimately, The Bridge On The River Kwai is not really a war film, but a film about a unique relationship between two professional military warriors, Colonels Nicholson and Saito. Both, in spite of coming together in their common goal and focus of completing the bridge, had lost sight of their duties and loyalties to their respective countries. War is Hell, and indeed a madness that cannot be properly articulated.

10.0/10.0 With The Goatesian Rating of one of the best films about War ever made

Quotes and famous lines from The Bridge Over The River Kwai: