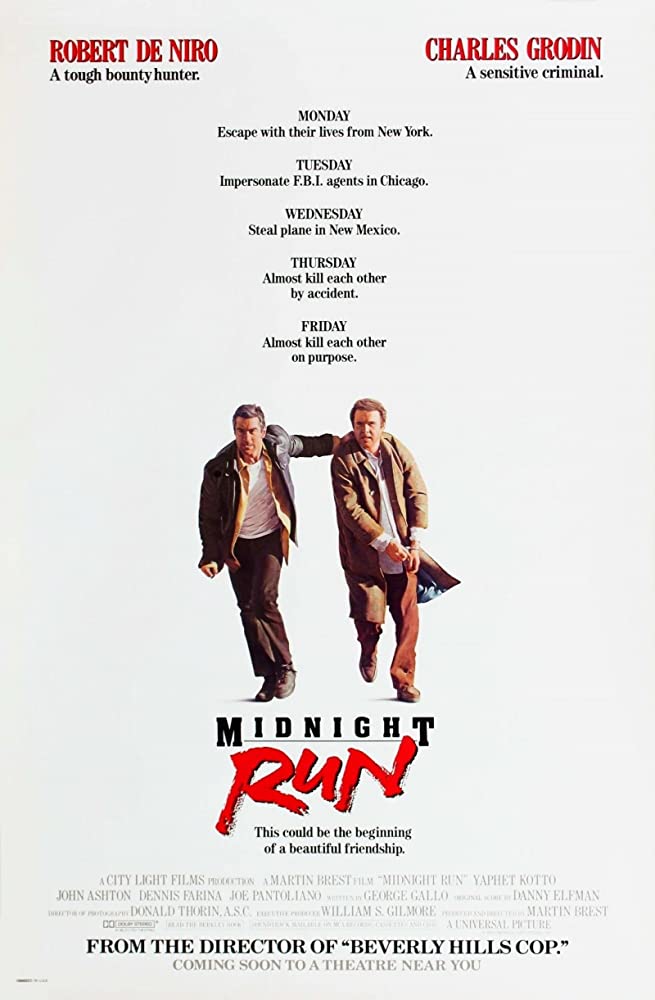 Everyone is after this guy, including Bounty Hunters, The Mafia, and the F.B.I.

This could be the beginning of a beautiful friendship.

Hardly anything to report, sadly. Bounty hunter Jack Walsh (Robert De Niro) and accountant Jonathan “the Duke” Mardukas (Charles Grodin), who is in his custody, quickly develop a sort of old married couple banter, but it is more reminiscent of The Odd Couple than the unconsummated man-love smoldering under the surfaces of relationships like those of Maverick and Iceman in Top Gun or Dutch and Dillon in Predator.

Duke is definitely the stereotypical wife figure in the relationship, nagging Walsh about his eating and smoking habits, while Walsh plays the grumpy, long-suffering husband. When Walsh handcuffs himself to Mardukas and throws the keys down a sewer drain around the midpoint of the movie, this could be seen as wedding symbolism.

Other than that there is nothing but one oddly romantic interlude in which Walsh stops at a diner after losing custody of the Duke. A slow, bluesy piano tune plays in the background as he eyes down the flamboyantly dressed counter man (Tracey Walter). “You’re open?” Walsh asks.

“Hard week,” Walsh replies. The counter man commiserates and pours him a cup of coffee, lights his smoke… and then they are rudely interrupted by FBI agent Alonzo Mosely (Yaphet Kotto), cementing his role as the Stupid Chief in the proceedings. It is a testament to the overall lack of homoeroticism in the movie that this scene feels so odd and out of place.

A paltry four human lives are snuffed out onscreen, with the first over forty-five minutes into the movie, in a shootout between the FBI and rooftop snipers sent to kill Mardukas. This is by far the most action in the movie up to this point, but the whole sequence takes less than two minutes and results in the same number of kills, so pretty disappointing in that regard. There is another, longer action sequence about twenty minutes later that ends in two more would-be assassins dying in the flaming wreckage of a helicopter.

Pretty good for what it is, but it barely qualifies as 80s Action with that pathetic Corpse Count. What little action there is to be found is in the slapstick vein of The Blues Brothers, with a wacky score by Danny Elfman and very few fatalities. Where it excels is the One-Liners, enhanced by the solid chemistry between the leads, as well as a great supporting cast. It is really best viewed more as Planes, Trains and Automobiles with guns than a full-on mix of action and comedy like 48 Hrs. Anyway, the cast is great even down to a lot of the smallest roles, and there are some genuinely funny moments, but the lack of mass carnage keeps it barely on the fringes of 80s Action, despite a solid Stupid Chief figure and some lone wolf cop stuff in the backstory. Certainly an enjoyable movie, but not essential 80’s Action.

Walsh has a fun habit of re-contextualizing things Mardukas says into violent threats against him, such as early on when the Duke is listing his supposed phobias (including fear of flying) and Walsh says, “If you don’t cooperate you’re gonna suffer from fistophobia.” This pays off nicely later when it turns out the Duke is an accomplished pilot, something he didn’t think was “appropriate” to tell Walsh at the time, to which Walsh shouts, “I’m gonna appropriate your head, goddammit!” He even pronounces it correctly for this context, meaning “to take for one’s own use, typically without the owner’s permission,” so it’s a pretty smart quip.

Rival bounty hunter Marvin Dorfler (John Ashton) also gets a good one in when Mardukas tries his acrophobia bluff again while in his custody. “Yeah?” he says. “Well, why don’t you just sleep through it?” and punctuates the word “sleep” with a knockout punch to the Duke. Nice.

Walsh is a bit of a Serpico type who was forced out of the Chicago Police Department after refusing to take part in the corruption that had overtaken it. His honor is conflicted by the fact that wherever he ends up delivering Mardukas, the Duke will ultimately be killed by the same mob boss who owned Walsh’s former Department in Chicago, Jimmy Serrano (Dennis Farina, who was basically Chicago in human form, may he rest in peace). Throughout the movie, Walsh learns to see the Duke not as the “fucking criminal who deserves to go where [he’s] going,” but he is a basically conservative cop with a good-guys-bad-guys worldview, and a fierce hatred for corruption. This is all just background for the wisecracks, though, as Midnight Run has very little political content, stupid or otherwise.

The great Yaphet Kotto fulfills this role as FBI agent Alonzo Mosely, whose badge Walsh steals when they first meet. Their antagonistic, grudging partnership yields roughly as many funny moments as the main one, per relative shared screen time. He is not Walsh’s Chief, as Walsh is no longer a cop, but it is the same dynamic.

Walsh shoots the tail of a helicopter, sending it into a spin that crashes it into a nearby rock wall in a fiery explosion. De Niro kills a mere two people in this movie, but that is half the overall Corpse Count and he does it with style!

Not even close. The finale does offer up the potential for the cleansing rain of gunfire at least, only to end instead with a disk exchange and a whole lot of arrests. Not a drop of blood shed, unfortunately.

For some reason, six years after the release of this movie there were three made-for-TV sequels, all released in the same year, 1994, and starring neither of the two leads whose chemistry made the original a success. Must have been a slow year for the network.