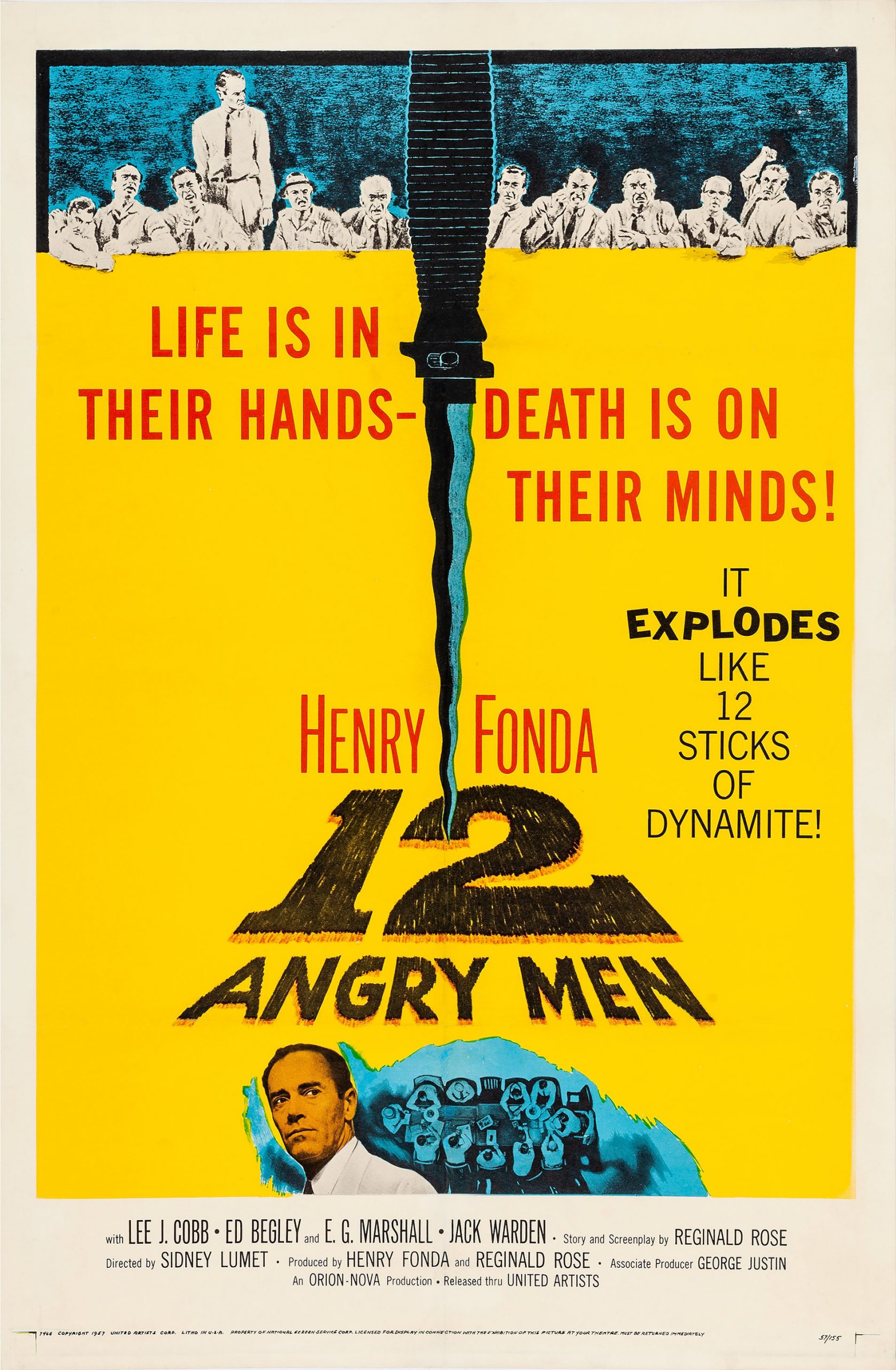 In movie jargon, the words “classic” and “masterpiece” are accolades that are tossed around quite a bit. Sometimes they are well deserved, sometimes not, and often the status is indeterminate. In the case of 12 Angry Men, there is no reasonable doubt at all about the verdict. This classic is a masterpiece and one of the greatest movies ever.

I have served on jury duty at least a dozen times, both in Memphis and in Colorado. Most of the time, you need to bring a thick book as chances are good that you won’t even be called out of the pool to actually serve at a trial. Sometimes you are called, and I have been on the jury at a few trials that were Class A felonies, involving rape, attempted murder and racketeering. From what I experienced as a juror, I would be terrified to be sitting in the defendant’s chair, guilty or innocent.

Sidney Lumet was a master of the cinema and has made great films like Fail Safe, Serpico, Network, The Verdict and his last film, Before The Devil Knows You’re Dead. All these other great films notwithstanding, 12 Angry Men is his masterpiece. The casting was perfect and the acting and dialogue rank up there with great films like The Hospital, Who’s Afraid Of Virginia Woolf and The Lion In Winter.

This movie is not about the trial at all, as the first thing we see is the jury, then a brief and uninspiring charge by the judge, and one look at the defendant, a young Hispanic adult with a very sad look in his eyes. The 12 men file into the sweltering jury room, some grumbling and all sweating, to determine the fate of this young man, accused of brutally murdering his father with a switch-blade.

After milling around for a while, the hot and somewhat annoyed jurors take a quick vote and all vote to convict, without any deliberation at all. All, except one, the venerable Henry Fonda, who thinks they are being a little bit hasty with such a serious matter. There is a mandatory death penalty if the defendant is convicted. Juror # 7, Jack Warden, is the most annoyed with this inconvenience as he has a Major League Baseball game to attend that night. Other jurors like # 3, Lee J. Cobb and #10, Ed Begley immediately show their festering bigotry and that they have no intention of being objective, have heard enough, and then the fireworks begin.

I will try to avoid major spoilers, but if by chance you have not seen this great movie, you might want to watch it before reading all of this review. Henry Fonda (Juror #8), calmly and methodically presents his case to his fellow jurors. Unlike the others, he is not so sure about the this defendant’s guilt and would like to review the evidence presented during the trial.

The progressing deliberation and discussion is an amazing continuum of reveals, and the onion of evidence is slowly peeled away to painstakingly reveal the truth. Also revealed is the sickening bigotry and startling indifference of some of the jurors. After the testimony of the witnesses is thoroughly analyzed logically, it became apparent that there was cause for doubt, and reasonable doubt at that. More votes were taken and as the temperature and humidity rose, tempers and tension mounted with every subsequent vote.

The camera work, dialogue and acting were about as good as it gets. The character development, considering there were 12 to develop was unprecedented in film. There were several sidebar duets where jurors interacted, one on one, that helped break up the tension in the room. I didn’t observe a wasted shot, line, or moment in this movie. Some jurors showed compassion and restraint, as others ultimately revealed their ugly bigotry. There was one amazingly powerful scene where the ugly racism boiled over, to the disgust and realization of 11 of the 12 men. Some of the self-hoisting utterances from the bigots were simply delicious. This was a stunning turning point in this movie and is one of the most dramatic scenes in the history of cinema.

All of the performances in 12 Angry Men were top notch, but Henry Fonda, Lee J. Cobb and Ed Begley’s performances were exemplary. Only the existence of another masterpiece, The Bridge on the River Kwai and Alec Guinness could keep this movie from taking Best Picture and Best Actor. This is probably the best courtroom drama movie ever made and a must watch for anyone who loves classic cinema.